Considering the sweeping views offered by the Sea Point promenade, there are remarkably few restaurants for sundowners on the strip. Strolla, which was opened up in December by the same people as Sotano and Quaglinos, offers a pretty grand view of the sunset, from a slightly hidden location, tucked in between the MyCiti feeder station and the Peninsula All-Suite Hotel. Katharine Jacobs went to investigate. 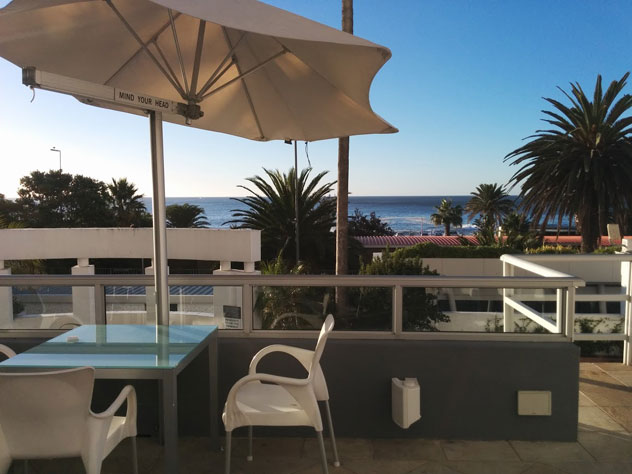 Price: R95 to R195 for mains
Serves: light meals, salads, pizza and bistro-style mains
Best for: Sundowners whilst strolling the promenade
Parking: There’s usually street parking to be found outside or in the open car park next to Queen’s Beach
Star ratings: food 3, service 4, ambience 4

We kick off with the exotic-sounding Guinness-infused chicken lollipops. These turn out to be drumsticks and wings coated in a thick batter – the batter though, is delicious, golden and crispy; infused with Guinness as billed, and the chicken is succulent inside. 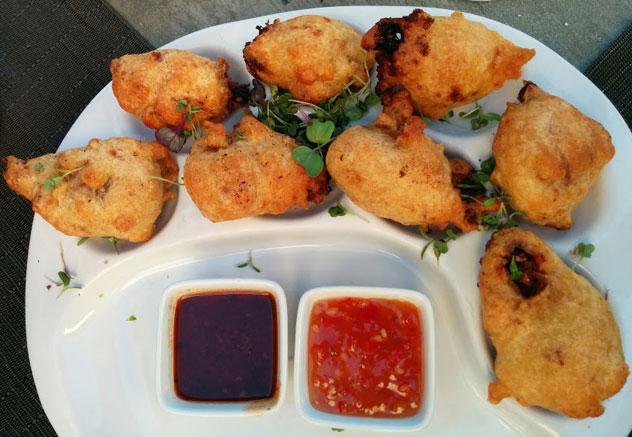 For mains, I can’t help but order pulled pork risotto – two of my favourite things, combined in one dish. Alas, the flavours are a bit one-dimensional – perhaps some mushrooms or a glug of wine would help to add some nuance to the dish. (Else you’re just left with a huge bowl of gooey rice, of one flavour.)

My accomplice orders one of the five pizzas on the Strolla menu, which arrives a little pallid. The bacon is not crispy on top, and a bit sparsely spread, and the base is rather thick and floury. It’s cheesy and satisfying, but it’s not a pizza with ambition. 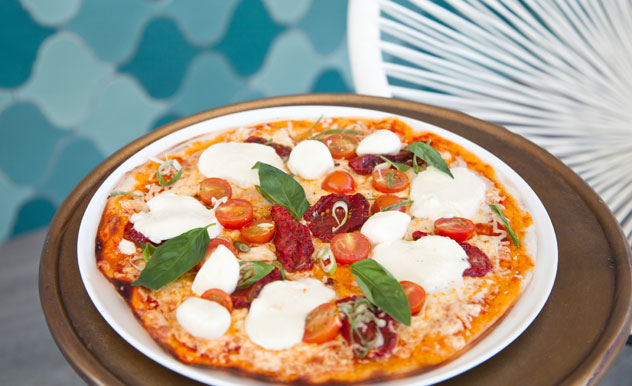 One of Strolla’s pizzas. Photo supplied.

For pud, we order a nougat cheesecake, a creamy fridge version, which tastes almost exactly like a bar of Damascus nougat, complete with the little green and red jewels and peanuts. It’s kind of great, if like me, you had a childhood love of that particular brand. 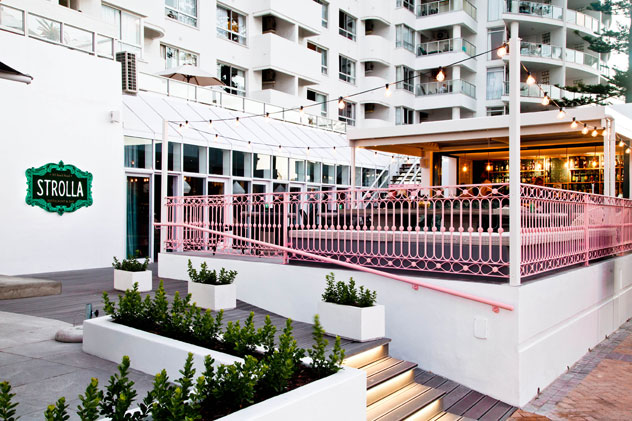 The ground floor deck and bar at Strolla. Photo supplied.

My accomplice describes the food as ‘comfy’. Haute cuisine it is not, but it’ll fill the gap while you gaze at the sunset. (The Strolla team have done precious little promotion since opening in December, so perhaps they’re hoping to fine-tune the menu still.)

There’s a good wine list, featuring favourites like Warwick, Tokara and La Motte alongside a few lesser-known blends like Peter Bayly, Black Elephant and Stony Brook. There are one or two options from each varietal available by the glass. 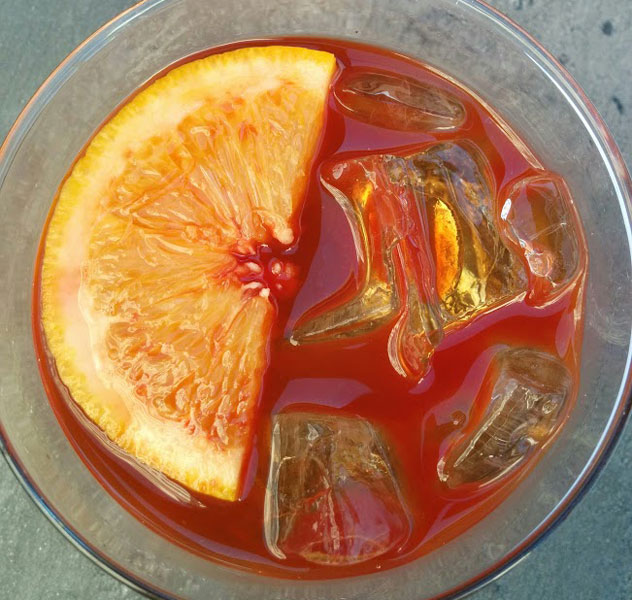 There’s a full cocktail bar too – we sip on a salted caramel old fashioned, which adds a touch of sea salt and Monin caramel to the traditional whisky, bitters and orange zest mix. I suspect it would anger purists, but we think it’s pretty great.

Coffee is by Bootlegger, and there’s a separate Bootlegger kiosk with seating attached, if that’s what you’re after.

This is where Strolla shines. It may be separated from the sea by a two-strand road, but a smoking deck, positioned upstairs, manages to graze the roof of the MyCiti bus stop, and is bathed in golden light, come sunset. Order cocktails, and watch the sun sink into the sea, and speculate about whether black flecks on the ocean are whales, dolphins or kelp. 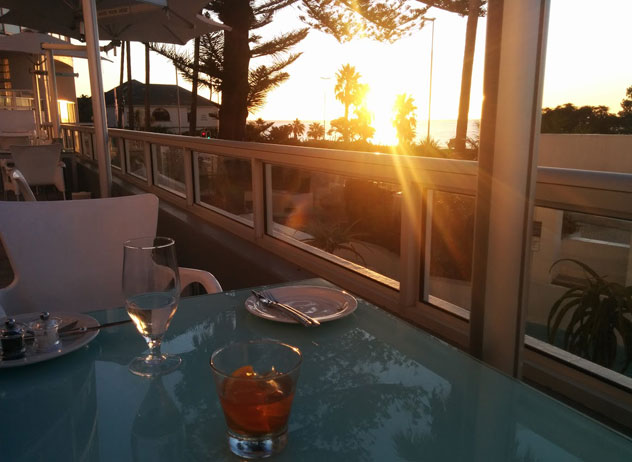 The smoking deck at sunset. Photo by Katharine Jacobs.

Downstairs, there’s a relaxed deck attached to the cocktail bar, which would make a good spot to stop for a drink whilst strolling on the promenade. Sure enough, a basset and his humans pop in for a drink while we’re there, before continuing on their stroll. There’s also a stylish inside area, with a fireplace, so if things get a little nippy after the sun has gone, you can always move inside. 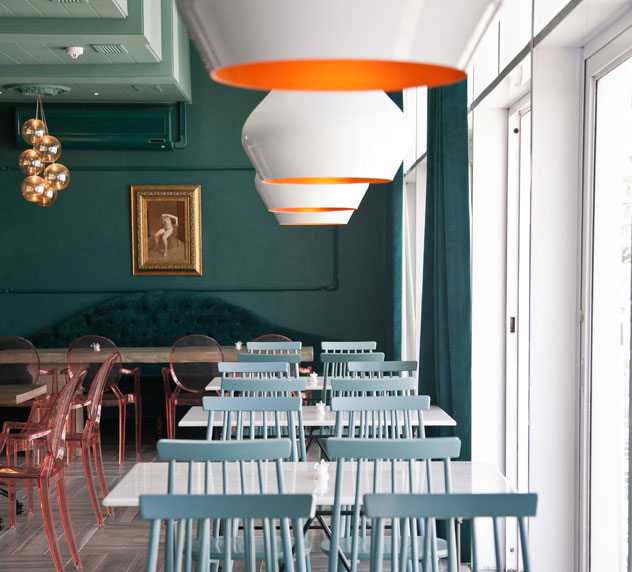 The inside area at Strolla. Photo supplied.

There’s also a kiddie’s playroom inside.

Our waiter is very courteous and helpful – and patient with us moving tables an impressive three times. The kitchen was not lightning fast – I anticipate it might be slow on busy days.

Have you visited Strolla yet? Share your experience in a review. 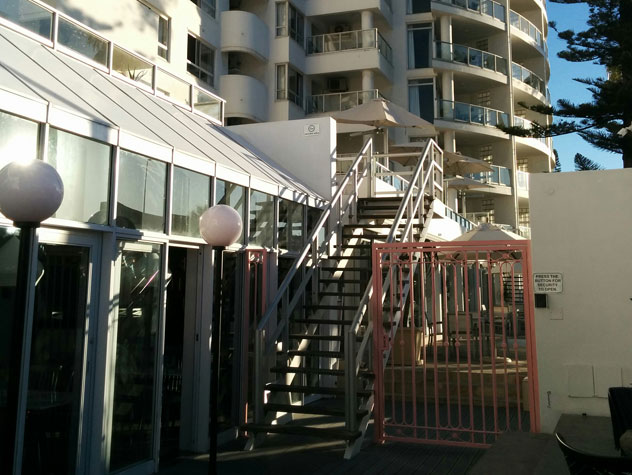 The staircase leading up to the upstairs deck is easy to miss – but worth the climb! Photo by Katharine Jacobs.