Rust en Vrede wins big at the Eat Out Awards 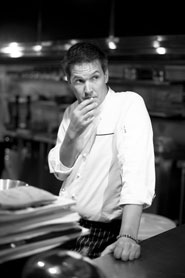 With three visits to the stage at the annual Eat Out Restaurant Awards, David Higgs is the man of the moment. Scooping all three major awards – Restaurant of the Year, Chef of the Year and the Service Excellence award – Rust en Vrede has established itself as South Africa’s premier fine dining destination under David’s guidance.

David has always shown impressive artistry on his plates and is renowned for going the extra mile. He understands the value of the ‘personal touch’, and together with his team, he works on building personal relationships with his customers.

Says Eat Out editor Abigail Donnelly, “David has shown astonishing talent this year. His dishes are so well crafted; he sources the best possible local produce, which translates beautifully on the plate.”

Rust and Vrede is the first in a slew of winelands restaurants featured on Eat Out’s Top 10 list for 2010.