Before DStv arrived, cooking shows on TV were really few and far between, limited to the likes of wine-sloshing Keith Floyd. (Not that we had a problem with his passion for the grape.) Today, with hundreds of channels to flip through and be inspired by, practically everyone has become a foodie.

Broadcasters like M-Net, BBC, The Food Network, TLC and even our own homegrown channels have expanded our culinary world, giving us new perspectives on exciting ingredients and methods.

We seem to have a thing for the British. Jamie Oliver first graced our screens as the Naked Chef and has come a long way since then, championing healthy school meals and quick, “pukka” dishes inspired by his trips around the world. His accent and blokeish manner make him ultra approachable on TV. He’s currently working on a new show, Jamie and Jimmy’s Friday Night Feasts, which will air in October this year on Channel 4 in the UK – and hopefully on local channels soon thereafter.

This self-taught cook demonstrates that the way to people’s hearts is indeed through their stomachs. A shameless glutton (often seen licking the batter bowl and raiding the fridge at midnight), Nigella Lawson has published her fair share of cookbooks and won us over with shows such as Nigella Bites, Nigella Feasts and Nigella Express, and she has an upcoming show entitled The Taste UK, scheduled to launch in late 2014.

The lovely – if somewhat pretentious – Ina Garten, with her gentle ways and clever hosting tips, is infinitely watchable. The delicious comfort food she prepares makes for excellent culinary voyeurism. Watch The Barefoot Contessa weekdays on the Food Network (channel 175). 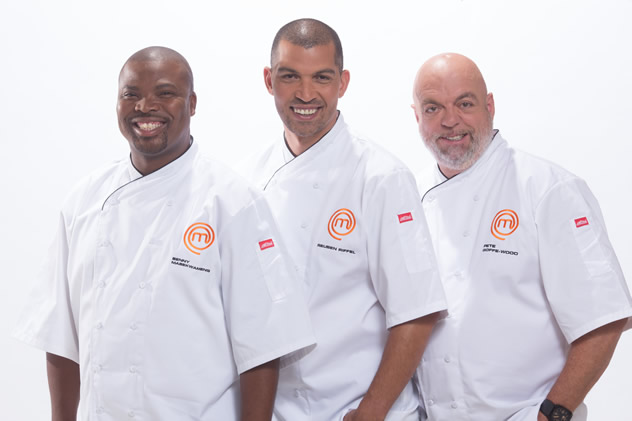 Buddy Valastro had us at “cake”. The chef, backed by his amazing team, creates sweet, delicious art that’s too beautiful – almost – to eat. Carlo’s Bakery in New Jersey is where the magic happens. Tune into TLC (Channel 172) season six of Cake Boss, which airs from 1 August.

The first season of the South African version of Chopped took off on 23 July. The show is proudly South African and features many of our favourite brands, giving a fresh take on local being lekker. Catch Chopped SA on Channel 175 every Wednesday at 9pm.

Come Dine With Me

Sarky narrator Dave Lamb and the kooky contestants really make this show, whether it’s the South African or British version. Not only do we get to poke fun at people’s messy kitchens, tacky table settings and cooking, but we can yell out our own personal score for each of them in the comfort of our own homes. Come Dine With Me (both the UK and SA versions) is screened on BBC Entertainment (channel 120).

Energetic, crazy and daring are all words with which we could describe frosted-tipped host Guy Fieri, but when he takes us on his journey to some of the most interesting diners in the US, we can’t help but wish we could tag along with him in his infamous red Chevy. Watch back-to-back episodes of Diners, Drive-Ins and Dives on the Food Network (channel 175) every Sunday.

No matter where he is or what he’s up to (even making Checkers adverts), world-renowned angry man Gordon Ramsay knows just how to entertain us. He had our attention with shows like Kitchen Nightmares and Gordon’s Great Escape, and now he’s bringing all the rage to Hell’s Kitchen. He may be hard to please, but with his brutally honest critique and potty mouth, Gordon makes for great television. Catch Hell’s Kitchen on BBC Entertainment every Monday at 9pm.

Based on the original British MasterChef, this particular version seems to be the most popular – arguably even more so than our local version. With Brent Owens being crowned this year’s MasterChef Australia, we wonder what’s hidden underneath their chefs’ hats for the next. (Read our interview with MasterChef Australia judge Matt Preston here.) M-Net (channel 101) is where the action is.

Last year’s season had us glued to our kitchen stools as Kamini Pather, Leandri van der Wat and Seline van der Wat went head-to-head for the MasterChef SA title. This season, the judges (joined by celeb chef Reuben Riffel) have once again swapped their whisks for clipboards. Tune in to MasterChef SA Season 3 on M-Net (channel 101) every Thursday at 7.30pm from 21 August.

Healthy, hearty food with a South African twist is what the beautiful Sibahle Mtongana prepares for us every week. After hosting her first outing, Cooking With Siba, she was approached by the Food Network to spread her wings. Siba is now also featured on Chopped SA as one of the judges. Siba’s Table is on Food Network (channel 175) weekdays.

This show keeps surprising us. Who knew you could perform such magic on an open fire? It not only broadens the definition of the word ‘braai’, it also shows a completely different Mzansi approach. (Plus we it gives some shine to Eat Out Awards regulars Bertus Basson of Overture and Marthinus Ferreira of DW Eleven-13.) The Ultimate Braai Master is on e.tv from 11 September.

Which are your favourite cooking shows? Let us know in the comments.