The wine whisperer: Winner of the 2016 Wine Service Award 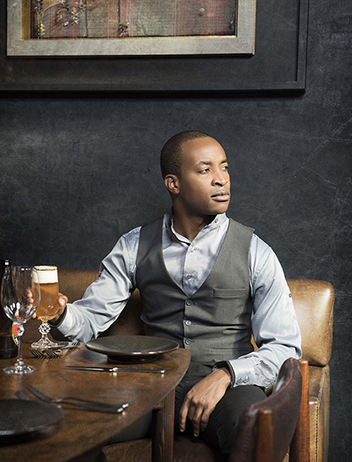 Tinashe Nyamudoka, winner of the Eat Out Wine Service Award, wins hearts at The Test Kitchen with his knowledge and charm.

After bursting onto the SA scene, Zimbabwe-born Tinashe has climbed the restaurant ranks thanks to his passion for the industry and exceptional wine service. Tinashe enrolled in the Cape Wine Academy to complete his South African Wine and Certificate Wine courses as well as his Wines of the World and Wine and Food courses.

He’s no stranger to accolades. In 2013, Tinashe was awarded Best Wine Steward in the Cape Legends Inter-Hotel Challenge for his work at Nobu and Reuben’s at One&Only Cape Town and in 2014 he completed a 14-month run at The Oyster Box Hotel in Umhlanga Rocks. Now Tinashe is reaching world-class levels as the dynamic head sommelier and beverage manager at The Test Kitchen.

His charm and passion for the trade radiate, and his familiarity with wine is something to be admired. Chief judge Abigail Donnelly says, “Tinashe’s interactions are friendly and conversational, but he never make guests feel ignorant. He shares his carefully selected wines in his unique, confident manner.”

Judge David Higgs has also noticed this understated service from Tinashe. “He is, without a doubt, one of the best wine guys on the floor at the moment. He’s very knowledgeable, works with such ease, never forcing anything, and actually listens to you – which very few people do. I was really impressed by this young man.”

On his win, Tinashe said, “My wine philosophy is to be adventurous. It’s been a difficult but fun year. To work with such amazing chefs is an honour; it challenges me in the best way.”