Pour the condensed milk into a large bowl and mix in the grated chocolate. Add the peppermint essence and food colouring and mix well. Carefully fold in the whipped cream. Pour into a freezerproof container with a tight-fitting lid and freeze for 4–5 hours until semi-soft. If it sets, allow it to defrost until it is semi-soft, and then proceed further.

Melt the milk or dark chocolate over a double boiler, stirring frequently until melted. Using a pastry brush, brush the inside of each ice-tray mould with a thick layer of the melted chocolate. Chill to set and repeat twice more. Once the chocolate has set, place a dollop of the semi-soft ice cream into each chocolate mould until almost full, and then freeze until set. Top the frozen ice cream with a little more melted chocolate to seal in the filling. Freeze again until solid. Gently tap the mould against a hard surface to unmould the Italian kisses and store in an airtight container in the freezer or serve immediately. 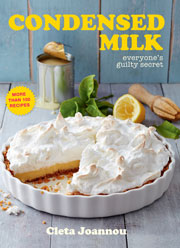