First, preheat the oven to 180 °C. Then, break the biscuits into a bowl. Add the butter, cutting it into the biscuits with a knife. Next, take a potato masher and crush the biscuits and butter together until they’re the consistency of breadcrumbs. Mix in a sprinkle of cinnamon, and then flatten the biscuit base into a round baking tin, making sure the edges of the tin are covered too. Put it in the oven and blind-bake the crust for about ten minutes or until golden.

While the crust is baking, pour the condensed milk into a mixing bowl. Whisk up the egg yolks and pour them into the same bowl, then slowly squeeze in the juice of three lemons. Stir with a wooden spoon, take the pastry out the oven and pour the filling into the tin. Pop it back in the oven and let it bake for 15 minutes. Take it out and allow it to cool. Chase away anyone who tries to steal a slice – I find that a dishcloth aimed at bare legs works well.

Extract republished with permission from Justin Bonello’s Cooked in the Karoo, published by Penguin. 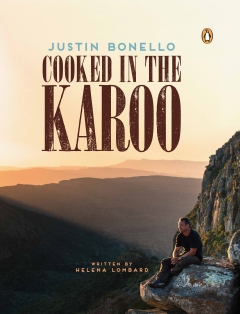