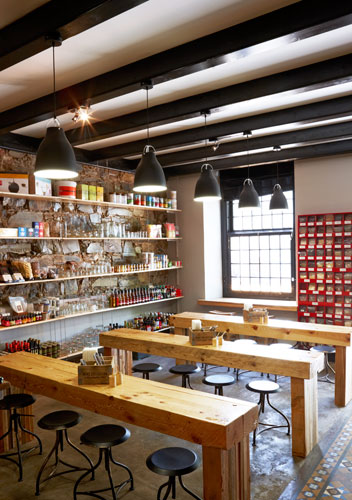 Meet the latest nominee for the 2014 Boschendal Style Award, awarded to the most stylish restaurant in the country – Chefs Warehouse and Canteen adds some fine culinary credentials to the growing gourmet destination that is Bree Street. Owned by Jan and Liam Tomlin, the eatery specialises in casual dining and Asian street food. Combined with the drool-worthy deli, this establishment represents the evolution of their cooking school and deli, previously located on New Church Street.

With the kitchen directed by Liam’s award-winning culinary skills, the menu changes from day to day, offering a selection of eight tapas to choose from. A small Asian street food canteen also offers takeaway lunches. As with the exotic and global origins of the deli items, the fare is inspired by cuisine from around the world.

Designed by the owners in collaboration with manager Peter Brophy, the space is informal, featuring communal tables made from recycled packing boxes, and counter seating on the terrace. Most of the original buildings’ details – old stonewalls, mosaic floor tiles and high ceilings – were kept in tact, with bold vinyl lettering adding some spunk. In the interior dining area, deli produce is lined up against the walls, while the second room features various kitchenware and an incredible selection of books for sale. With the daily menu printed on rice paper and attached to sushi mats, the atmosphere is fresh and upbeat.

Does Chefs Warehouse and Canteen have what it takes to win the 2014 Boschendal Style Award? The winner will be announced at the Eat Out Mercedes-Benz Restaurant Awards on Sunday 16 November. (Buy your tickets now.) See the other nominees here. 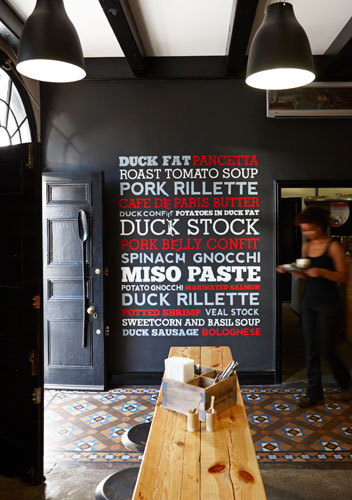