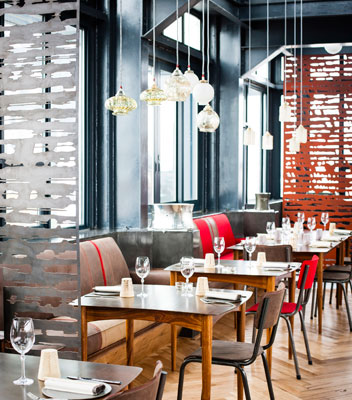 Our latest nominee for the 2014 Boschendal Style Award, awarded to the most stylish restaurant in the country, The Pot Luck Club at the Old Biscuit Mill in Woodstock, has been solidly booked out for two seatings every night since opening in February 2013. The restaurant was conceptualized by the award-winning chef and owner Luke Dale-Roberts as a space where tapas-style plates of food are meant to be shared. Dale-Roberts is also chef and owner at the current Eat Out Restaurant of the year, The Test Kitchen, also located in the Biscuit Mill.

Offering plates of tapas designed to be shared, the menu is organised according to five tastes: salty, sour, bitter, sweet and umami. Drawing from his extensive travels to South America, Europe, Asia and Africa, Dale-Roberts has sought to develop dishes with punchy global flavours. These flow from the theatrical open-plan kitchen dominated by a 1.4m Robatta grill and range of power woks.

Does The Pot Luck Club have what it takes to win the 2014 Boschendal Style Award? The winner will be announced at the Eat Out Mercedes-Benz Restaurant Awards on Sunday 16 November. (Buy your tickets now.) See the other nominees here.