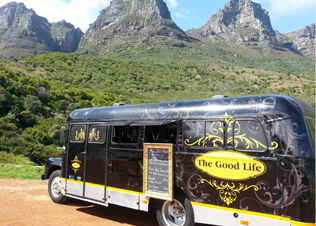 Location can be a make-or-break factor in the restaurant game, but for these restaurants on wheels, their only address is the open road. Mobile restaurateurs still face big challenges from a licensing perspective, but nevertheless food truck numbers in South Africa have ballooned in the last year, giving diners the opportunity to indulge in Nutella bombs overlooking the ocean, gourmet coffee in the heart of inner-city Jozi and oolong tea at rock festivals.

Cape Town residents are particularly blessed in the food truck department, and news that the Cape Town City Council is working with food trucks to create a dedicated trading area suggests the number will grow even more in coming months. As summer takes off, here’s our guide to the ultimate alfresco dining: a list of food trucks currently operating in Cape Town, Johannesburg and Durban.

The Baguette Bicycle
On the menu: gourmet sandwiches.
Popular haunts: Deluxe Coffee Works and Bean There in the CBD.
Follow: @BaguetteBicycle

Limoncello
On the menu: cheesy calzones, risotto and moreish Nutella bombs.
Popular haunts: Oudekraal on Wednesdays and Sundays (weather permitting), and Salt River Circle most lunchtimes during the week.

Juice Deli
On the menu: a selection of fresh juices.
Haunts: Oudekraal on Wednesdays and Sundays (weather permitting), and Salt River Circle most lunchtimes during the week.

Detour Espresso Bar
On the menu: coffee, a small range of Dilmah teas, hot chocolate and snacks from Bags of Bites.
Popular haunts: Oudekraal on Victoria Road mornings during the week and on sunny, wind-free Sundays.
Follow: marckpatrick@gmail.com or 073 361 3453

Die Wors Rol
On the menu: Betsy (as the truck is called) is run by the chef of current Top 10 restaurant Overture, Bertus Basson, and serves hotdogs with 22cm sausages made with Sweetwell Farm meat, specials sauces and thrice-fried chips.
Popular haunts: Caters to festivals, private parties, and occasionally at markets.
Follow: @DieWorsRol, call 078 822 2885, or visit the website.

El Burro (run by the owners of the Greenpoint restaurant of the same name.)
On the menu: Mexican street food such as ceviche, chilli rellenos, various tacos and churros.
Popular haunts: The Neighbourgoods Market and private events.
Follow: @_El_Burro on Twitter.

The Nob
On the menu: The mobile trailer version of the Woodstock restaurant serves the restaurant’s signature ‘no ordinary burgers’ (NOB).
Popular hangouts: events.
Follow: on Facebook

The Soft Machine
On the menu: soft-serve ice cream in bespoke flavours such as moerkoffie with spice snaps, sweetcorn with tomato jam, and real strawberry with meringues.
Popular haunts: in summer you can find them at the Neighbourgoods Market at Woodstock’s Old Biscuit Mill, but until the weather heats up they’re focusing on private weddings and events.
Follow: @softmachine1 , or on Facebook.

Tebb’s Kitchen
On the menu: burgers, boerie rolls, salads and chicken wraps.
Popular haunts: Sea Point Promenade – they also do events and functions.
Follow: @Tebbs-Kitchen and they are also on Facebook.

Down to Earth Farm Feasts
On the menu: part food truck, part pop-up, the dynamic team at Down to Earth prepare bespoke feasts in their converted Bedford truck.
Popular haunts: Individual events at farms around Gauteng.
Follow: on Facebook or visit their website

Hot Ginger
On the menu: gourmet tramezzinis and other simple food.
Popular haunts: Melville and surrounds, East Rand and Pretoria, as well as private functions and sports events.
Follow: They are currently on a break while owner Shenny Manning recuperates from an injury, and plan to reopen in two to three months’ time. For updates, check Facebook or email hotginger3@gmail.com.

The Tutto Food Co.
On the menu: flatbreads and paellas.
Popular haunts: Sandton (corner Gwen and Maude streets), Market on Main (Currently on a break while owner Shenny Manning recouperates from an injury. They plan to reopen in 2-3 months time), Desmond Street Kramerville, and the Midrand Gautrain Office car park.
Follow: @tuttofoodco on Twitter and Facebook.