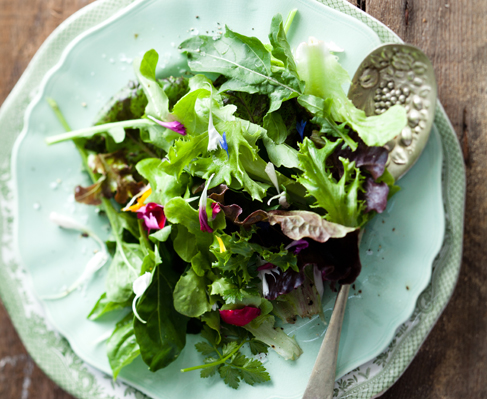 “We’re very earthy people,” Gary Boonzaier tells me, when I ask about his ‘fresh and flavourful’ herb salad, which won the recent Eat In DStv Food Network Small Producer Award in the Earth category.

After hearing that he and his partner Philippa Hill sow, grow and harvest all their herbs themselves on a smallholding in the Klein Dassenberg area in the Western Cape, I believe him. The bonus of working without help, he says, is that the two of them know everything that goes into – and out of – the soil, ensuring the very best organic quality. “We want to produce herbs that we would be proud to put on a plate, anywhere.”

Boon Hill herbs – the origin of the name doesn’t take too much of a leap – was born in 2009 out of necessity, I am told. Gary and Philippa had been talking about it for some time and, when the opportunity arose out of less-than-ideal work circumstances, they jumped on it. Beginning as a cut flower business in 2009, Boon Hill had to shift focus to herbs when the economy slowed down.

Grown in Gary and Philippa’s own garden on Seven Oaks farm in Atlantis, near Malmesbury, these herbs and edible flowers are as “organic as you can get”, sharing space with the pigs, chickens, sheep, horses and even rabbits.

“We adore our salads and eat right out of our garden… along with all the other critters,” Gary laughs, before regaling me with a story about a cheeky (and powerful) porcupine that dragged a 4kg butternut out of the veggie patch and devoured it in two sittings, and about the resident moles that munched all the potatoes. It’s not always easy growing organic.

However, when I ask for any gardening tips, Gary says it’s the only way to go. He also recommends mulching your beds. “Never throw anything away – even your grass cuttings.” In fact, they use old coffee grounds from Melissa’s (one of their loyal suppliers) for the garden too, which they collect twice a week in a 25kg drum. The tomatoes they’re starting to grow – heirloom tomato varieties of all shapes and sizes – respond well to the acid in the coffee. (Some of these varieties can even be traced back to the 18th Century!) But in the meantime, the herbs sales tick over nicely.

They deal directly with their loyalty base of chefs, as well as some stockists including Wright Stuff in Melkbosstrand and the Lavender Blue Health Shop.

If you want to get your hands on some beautiful herbs, contact Gary on 084 664 8063 or boonhillherbs@gmail.com. Find out who else won a 2012 Eat In DStv Food Network Produce Award here.