Nurturing and feasting at Dear Me 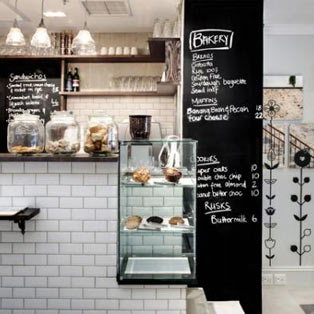 As I slip out of the lunch-time bustle of the CBD into the beautiful dining room of Dear Me , I feel a little like Alice sliding down the rabbit hole. Everything is a little whimsical, from the beautiful wooden deli shelves complete with a ladder for getting to out-of-reach items, to the plants suspended upside-down from the ceiling, which give the room a sense of being turned on its head, too.

The brainchild of Ilze Koekemoer, Dear Me opened just over a month ago for lunch and one dinner service a week, on Thursdays. Already though, this small inner-city restaurant is creating a buzz in Cape Town, with its commitment to doing things a little differently. As the name suggests, it is a space for nurturing the self – with options for people with special dietary requirements, made with ingredients that are ethically sourced.

‘It was an idea that had been in my head for a while. When I first started thinking about it, you saw a little bit of wheat- and dairy-free stuff around, but mainly in high-end supermarkets, not in restaurants,’ Ilze tells me, as I take a seat with her and chef Vanessa Marx in the eclectic upstairs space.

Initially, she planned to have a greater health emphasis, but as the idea developed it became clear that the market’s gap was for a spot where you could both spoil and nurture yourself.

‘If you want a Valrhona dark chocolate fondant, you can order one. Or you can have a seasonal fruit plate.’ Each of the menu items is accompanied by a suggestion as to how the recipe can be modified – to remove dairy or wheat or gluten, for instance. Vanessa is herself diabetic, and there is also a fabulous range of pastries using an entirely natural low-GI sugar substitute.

The other major focus of the restaurant is on using free-range, sustainably farmed produce. In fact, rather like those inverted plants dangling from the ceiling, it’s the produce that determines the menu, rather than the other way around. Where do they find their ingredients, I wonder?

‘We travelled across the country, up every hill, down every valley,’ Vanessa tells me, explaining that they used the year of renovations to source their ingredients. They now get grass-fed beef from Greenfields in Mooi River, lamb, beef and eggs from Wild Organics in Woodstock, sprouts and shoots from The Magic Herb Man and organic vegetables from the Drift in Napier.

‘I got purple fine beans from The Drift last week,’ Vanessa says happily. ‘And organic honey.’ The restaurant uses only fish that is certified green on SASSI’s list, avoiding even prawns, which are on the orange list due to the environmental impact of their fishing. At the moment there is sustainably farmed cob and trout from Wild Peacock on the menu.

In keeping with this ethic, they also serve no bottled water, but have a water purifier on the premises and offer diners sparkling or still purified water for free. “It is definitely more expensive,” Ilze admits.

‘My grass-fed beef costs almost double,’ says Vanessa, but for their diners, so far it seems that the higher prices have been worth it.

‘You eat with a better conscience; you start eating with real awareness,’ Ilze says. ‘You’re aware of what’s going into your body, and the effect of what you’re eating is having on the environment around you.’

Even the building has absorbed this ethic. “When we found the building we completely fell in love,” Ilze tells me. The 181-year-old building was, however, very dilapidated, and needed an entire year of restoration.

‘I was standing in the open air in the kitchen,’ Vanessa says of the space before the renovations started.

You wouldn’t know it to look at it now. The building has been lovingly remodelled so that the décor is a beautiful mix of old and new – crumbling raw bricks on one wall make a chic accompaniment to the plate glass, screded concrete floors and vinyl wall decals. Upstairs, at Tjing Tjing, the bar where tapas and cocktails are served, the original mansard roof is intact, and painted red. The space has a magical Japanese feel.

‘Each space is really different,’ says Ilze, ‘it was so much fun.’ At this juncture, appropriately, a décor magazine team arrives to do a shoot of the interior.

Leaving Ilze and Vanessa, I sneak downstairs and order a hot chocolate – frothed milk served with a bowl of Valrhona chocolates to stir in – and a plate of absurdly good home-made pork rillettes, with apricot and rosemary relish, and to take care of myself a little – wheat-free toast.

When I eventually leave, I feel that I’ve both been a little bit nurtured and a little bit spoilt. I step back out onto the street a slightly different Alice to the one who fell down the rabbit hole an hour before.