Eat Out S.Pellegrino Chef of the Year: David Higgs 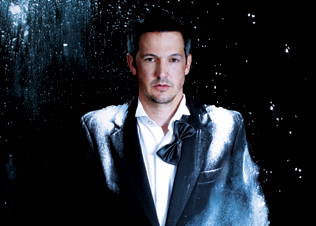 “What I admire about David is that he’s excelled in a market that hasn’t been celebrated for a while, showcasing the uniqueness of Johannesburg.”
– Chief judge Abigail Donnelly

Leaders in any field possess a formidable trio of curiosity, hard work and daring, and it’s no different for the 2013 Eat Out S.Pellegrino Chef of the Year, David Higgs of Five Hundred at The Saxon.

But these qualities are nothing without the chops to back them up. Words like brilliance, artistry and craft have been used to describe David’s talent for cooking, but he also has his feet firmly on the ground. While he’s sensitive and reserved, he knows the value of a personal touch and works hard to build relationships with both his suppliers and customers. This grounded attitude – and, indeed, his ability to land on his feet – has never been so evident as in his move from the sleepy Cape Winelands to the urban, past-faced pulse of Johannesburg so soon after his unprecedented awards haul of Chef of the Year, Restaurant of the Year and Service Excellence in 2010 while at Rust en Vrede.

Just over a year after opening Five Hundred at The Saxon Hotel in Sandton, David Higgs is once again on top.

While he seems to be the poster boy of cool and modern fine dining, David has also made forays into popular culture, most recently with an appearance as a guest judge on the second season of MasterChef, won by Kamini Pather.

His knack for people pleasing has him spending more time in the dining room than before, plating dishes at the table and interacting with his guests. Even when not engaging up close, the chef performs his magic in the kitchen for the viewing pleasure of everybody in the dining room.

Being in the public eye has made David a role model of sorts – and not only because of his dashing good looks. As chief judge Abigail Donnelly explains, “David has mentored many chefs; the young ones look up to him as their idol.”

But far from resembling a superficial fascination with flashy celebrities, this admiration is grounded in respect: David’s passion and mastery of classic and new techniques insist that he’s serious about excellence.

“Every piece of him translates to the eating experience. David is never complacent, showing not only talent and dedication to his craft, but also innovation: his work continues to evolve. He pushes the boundaries of South African cooking and promotes it across the world,” says Abigail.

A hotel in bold, busy Johannesburg is perhaps the best place to do this. “The thing I love about Joburg is that it never lets up,” David told Eat Out. In contrast to the gentle, seasonal cycles of the Cape winelands, July in Joburg is no different from December, allowing David to keep the rhythm going throughout the year – a hard and heady one at that.

Working at a hotel has its own rewards and challenges, too. As awards judge Liam Tomlin says, “It’s refreshing to see a hotel allow the chef to have complete control of his kitchen and dining room, from design through to delivery of service.”

This happy arrangement has resulted in top-class food presentation, execution and flavours, according to Liam.

And it doesn’t stop there. Abigail predicts that David’s presence in the city will have a ripple effect. “What I admire about David is that he’s excelled in a market that hasn’t been celebrated for a while, showcasing the uniqueness of Johannesburg. With this comes awareness and competition, creating a new platform amongst chefs and suppliers.”

With food that is, according to judge Garth Stroebel’s scorecard, imaginative, extremely tasty and of a world-class standard, David offers flawlessly presented, well-balanced and exciting flavours.

Using the best local produce helps, of course. The Saxon’s certified organic garden – coaxed back into life by David and his team – is a valuable resource. Judge Andy Fenner remarked on the chef’s celebration of simplicity: “The food doesn’t have unnecessary complications or textures, but rather takes established flavours and reinterprets them.”

The garden has thrown the old method of creating a menu on its head, says David. “Now we get to walk around the garden and say, ‘We’ve got this really beautiful purple cauliflower. What can we do with it?’  “It’s been very rewarding for me.”

Ditto for anyone fortunate enough to eat a dish dreamed up by David Higgs.