Fighting for Franschhoek: Chef Chris Erasmus on being a father and running a feeding scheme

While Chris Erasmus was charging around Franschhoek during lockdown, doing his bit to feed the village and keep his restaurant afloat, his wife and co-collaborator at Foliage, Alisha Erasmus, was homeschooling, cooking for their son Liam, 11, and her mom, and recuperating from a lung operation. “She was amazing,” Chris says. “If it wasn’t for her, I would have fallen apart.”

“I would come home and just vent,” he says. The poverty in the town “became real”. “Dealing with it every day, I cried myself to sleep a lot of nights. The stuff I saw: we were in the township every day, and I really realised the divisions between Groendal, the township, and the town.” 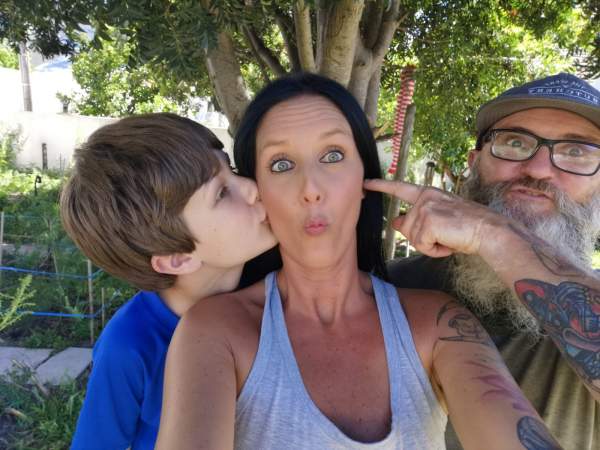 They protected Liam as much as they could but, as Alisha recalls, “he knew what was going on and he knew dad was away for work”.

“He asked me a couple of heartbreaking questions a few times,” Chris adds, “and it was the first time I had to deal with something like that. I didn’t even know what to say to him. He wanted to know if the other children were okay, did they really have food.”

“And I sat with him the one day and showed him pictures. And he just sat there and was quiet for about two days. It really affected him. But he had to know why I’m not here, why I’m out. He was also worried that I was going to get sick – that was his biggest worry – and then I’m going to come home and make them sick. That was the only strain on our relationship, I would say.”

In the “dark night of the soul” stage of lockdown, Chris closed the restaurant completely and converted it into a deli. And then he woke up one morning and thought, “Nah, I’m not going to take this lying down. Let’s get back into it.”

Pre-COVID, 90% of the diners at Foliage were foreigners. Apart from the regular influx of Capetonian lunchers on Saturdays, the predominantly French, Dutch and British visitors were attracted by the same style of cooking that South Africans “see as weird”. Sweetbreads, tongue, brain, cheeks, brisket, shanks: “Normally I take the stuff that nobody else wants,” says Chris.

One Sunday while Chris was in the restaurant, the electricity ran out. “No money in the bank account, nothing,” he recalls. “So I sent some WhatsApps to a couple of people saying, I need money please, for electricity for the restaurant. We need to carry on. And within five minutes, old Colston was there, with R1500. He’s, like, here you go, buddy.” (Chris Colston is a retired businessman from the UK and a local resident.)

Now he’s changed his culinary course, from fine dining to “fun” dining. “I’ve adapted my menu completely to feed locals. I’ve got a burger on my menu, I’ve got a steak on my menu. I hate prime cuts, I don’t do prime cuts. I don’t believe in using them. I do hooves, bone marrow and stuff like that. Now we’ve got a sirloin, we’ve got rib-eye. We’ve got spare ribs; the whole salad comes out of my garden with a fermented millet dressing. That I do like – it’s one of my favourite dishes – but we’ve adapted the whole menu to South Africans because we don’t have tourists.”

Alisha says they’ve had locals in who’d never eaten at Foliage before because they spotted burgers and pints on the menu.

The reception from locals to the Foliage that serves beer on tap and blares bluegrass on the stereo may be enthusiastic, but Chris is far from assured of the response he’ll receive from his overseas following.

“I don’t know. I really don’t know, because they expect fine dining. But when the borders open up and people come back again, I want to kick it up a notch – but keep it affordable. I just feel the whole overpriced R1000 menu should go away. It’s not right. We will always have it. But let’s leave that to the three Michelin-starred chefs, and there’s not many of them.”

“It’s very uncertain for all of us in our industry what’s happening and what’s going to happen. Normal doesn’t exist anymore.” Whatever happens, he doesn’t see things going back to how they were. “No, the damage is done. I mean, our margins are hairline anyway, just to survive. I am, financially, in serious shit. I’m about a million rand in debt and I was debt-free before lockdown.”

He didn’t let that stop him and fellow chef Darren Badenhorst from springing into action to source provisions for the village’s poor, a direct result of which is that at the time of writing this, there are 13 established soup kitchens in Franschhoek. 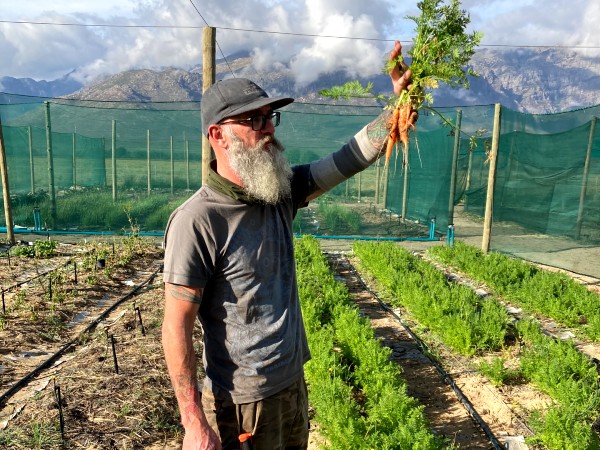 “And still we got a lot of negativity from the government. They never helped, not a single thing. They just tried to stop us. The national government closed down the soup kitchens four, five times during lockdown and we just reopened them in different spots.”

But for some exceptions, Chris says the locals who supported him and the other chefs in their community efforts were not the ones he expected. “The ones I expected to actually just disappeared – the ones with money who could have really helped us. It was people that have nothing who jumped in and helped. This lockdown’s really shown true colours.”