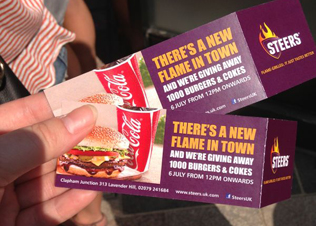 South African expats converged on Clapham on Saturday as fast food chain Steers opened their first British branch in London. One South African reportedly came all the way from Windsor for the opening, and Saffer accents could be heard up and down the queue. But did the burgers measure up to their memories of home?

Our London correspondent, Capetonian Megan Franzidis, who’s been living in London since 2009, was there for one of the first 1000 burgers given out for free.

“The chips were the same – amazing! The spice is the best,” Megan reported. The Steers burger, however, was not as good as she remembered. The temperature of the pre-prepared burger was perhaps the culprit. “But it was still decent,” she said, and rated it above Burger King and McDonalds.

And the Brits? Megan said her British companion had enjoyed his burger. “But he thought I’d hyped it up too much,” she revealed.

Though they queued for 15 minutes, the hysteria didn’t quite measure up to that experienced in Cape Town when Burger King launched in May, when people waiting in line for over an hour. Another burger spot in London, the upsettingly titled Meat Liqour, has also seen queues of up to two hours.

But will she go back?
“I fo shizzle will go back. I’m excited it’s here.”

If you’re craving a burger on your own sunny shores, check out our list of great gourmet burgers across SA.