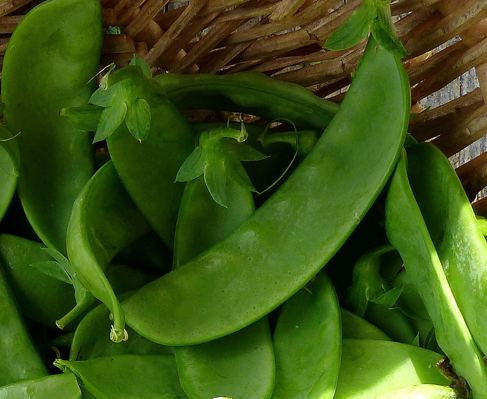 With pretty little peas all in a row, snug in their emerald pod, the snow pea is also known as mange tout, French for ‘eat all’. Appropriately, you can pop the whole pod into your mouth while it’s still crisp, unlike garden peas, which are shelled when plump and ripe.

As with all legumes, snow peas release nitrogen into the soil due to beneficial bacteria present in their roots. They are therefore a useful companion plant, especially when grown alongside leafy green vegetables that benefit from a high nitrogen content in their soil. Snow peas are rich in vitamins A, C and B6, as well as iron, dietary fibre, manganese and potassium.

Delicious when raw, they can also be blanched, steamed, or stir-fried. The pods are either left whole or cut to release the sweet little peas inside. Mange touts are popular in spring rolls, Asian dishes and soups alongside flavours like garlic, soy sauce, ginger, coriander and sesame oil, but are versatile in many other styles of cooking.

Try these quick ideas:
• The simplest way to prepare mange touts is to boil them in salted water and toss them in butter.
• Make a beautifully simple side dish by combining steamed green beans, mange touts and green garden peas. Drizzle with a mixture of fresh lemon juice, olive oil and crushed garlic, and sprinkle with lemon rind.
• For a beautiful green salad, combine watercress, baby spinach, chopped green onion, slithers of avocado and fresh mange touts. Top with crumbled feta and freshly ground black pepper. Serve with your vinegar of choice.
• Combine blanched mange touts, halved baby beets and toasted pumpkin seeds. Drizzle with a mixture of balsamic vinegar, olive oil and honey.
• Add some extra crunch to a grilled cling peach and pea salad by blanching mange tout with the peas.
• Similarly, peas can be replaced with mange touts when making paella.
• Mange touts are excellent in stir-fries. Try them with pork, ginger, chilli, red onion and asparagus and a dressing of dry sherry, soy sauce, sugar and corn flour.
• For a quick mid-week dinner, combine cooked penne pasta with steamed mange touts, green garden peas, feta and mint. Dress with a mixture of lemon juice, olive oil, crushed garlic, salt and pepper. To make it a bit meatier, add smoked salmon and replace the mint with dill and chives.
• Toss steamed prawns, blanched mange touts, thinly sliced spring onions and coriander in a bowl. Dress with hot sunflower and sesame oil and scatter with sesame seeds. Serve with basmati rice.