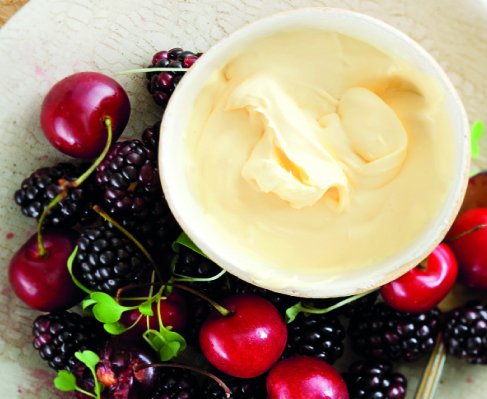 Jenny Cottrell and her husband John Kendall of Jenny’s Clotted Cream took home the dairy award at the 2012 Eat In DStv Food Network Produce Awards. The couple moved from South Wales to the small town of Robertson in 2006. Their new home is in what Jenny calls “the most beautiful and idyllic setting”, with a view of the Langvallei Mountains, on the Dassieshoek Nature Reserve. This was deemed the perfect spot to start producing and selling their dairy products in 2009, making use of the dairy herd of Jersey cows that came with the farm.

The couple had made traditional clotted cream in Cornwall, and thought – righly so – that there might be a market for this indulgent treat in South Africa. The same centuries-old method is used to make it, which Jenny insists is a secret. We do know, however, that their famously thick cream achieves its texture with heat and then slow cooling. The whole process takes 48 hours. It’s all done by hand and the result is naturally sweet, with no preservatives or additives of any kind.

You can tell authentic clotted cream by its delicate crust, which is almost yellow thanks to all the richness of Jersey milk, according to Jenny. This texture and creaminess were indeed noted with much enthusiasm during the tastings for the Eat In Awards this January. (We cannot confirm rumours, however, that members of the team were sneaking it out of the tub with spoons.)

“It’s hard to get a product off the ground,” says Jenny. But once people tasted their cream, that was it. She literally knocked on doors in her neighbourhood of Robertson to introduce people to the product. Their first clients were Grand Café in the town, and Hillcrest Berry Farm, which still beguiles visitors with fresh scones, Jenny’s Clotted Cream and freshly picked fruit.

“Melissa’s stores have been stocking the cream for two years this June.” Jenny had knocked on their door too, asking them to give it a try. Soon she was doing productdemonstrations in store, serving the clotted cream with Melissa’s scones and strawberry jam, and selling out. This is how it came to the attention of Eat In, resulting in its Eat In Award for Best New Product in 2010. ? ?

Nowadays the tables have turned, however, and the big names are the ones knocking on Jenny’s farmhouse door. She currently supplies to The Mount Nelson, The Table Bay, The One & Only Cape Town, and The Saxon  and Cassia Restaurant on Ntida Wine Estate in Durbanville Hills. La Marina Foods  have also recently approached Jenny and is now distributing her products up-country, too.

“Luke Dale-Roberts of The Test Kitchen uses my pouring cream to make his butter, and my clotted cream to make ice cream. He’s pretty happy with the products.”

And it’s no wonder. The cream on a litre of the farm’s fresh milk is apparently three inches thick. What we buy in sterilised plastic tubes in the supermarkets does not even remotely resemble this rich, creamy liquid.  I ask for some tips on storage and care. “Well, you treat just as you would any other dairy product, though you can’t freeze it. Keep it in the fridge with the lid on,” she advises. It absorbs flavours very well, which may not be ideal when you’re keeping half onions in the veggie drawer.

And how to enjoy eating it? (Apart from straight out of the carton with a spoon.) “Some people scoop it on top of their coffee, but you can also use it in savoury foods. It’s lovely with flapjacks and some crispy, smoked bacon and nice drizzle of maple syrup. I also stir it into soups and sauces. It’s a versatile product and it doesn’t split. You just need to play with it.”

The farm’s pouring creams and double creams are soon going into retail stores, so you can look forward to playing with them too.

Jenny reveals that she and John are aiming to start receiving visitors to the farm one day soon. “We have an old farmhouse and a lovely garden, so I would like to have people here for scones and cream, while the children can go see where their milk comes from.” They also do an old-fashioned English milk round to local businesses, communities and establishments like the local hospice.

It’s quite unusual for a client base to be a mix of small-town and big-city, but Jenny humbly sums up why it all works so well: “We’re not ‘big’ people, but we do a good product.”

You can get in touch with Jenny and John on 023 626 4685 or on jcottrell@telkomsa.net (though the internet is intermittent on the farm).