MasterChef 2 episode 10: The spice is right 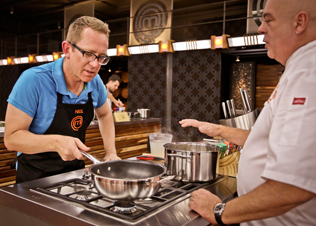 “The masters and mistresses of spice”

Wednesday night episodes are becoming tension-filled evenings with elimination rounds taking centre-stage after the Tuesday night challenge. And the team challenge provided plenty of drama and excitement as one member of the losing red team had hang up their apron and depart the picturesque Nederburg Estate.

Leandri found herself once again in the elimination pool and after last week’s stinky cheese challenge, and was relieved to hear it was about spice and all things nice. Sanet, Neil, Joani, Khumo, Karen, Leandri and Jason lined up before the spice stations and the judges explained that first three contestants to name an incorrect combination of spices went into the pressure test.

“Your taste buds should be finely tuned,” said judge Andrew Atkinson. Leandri was the only one who got the first spice combination correct. Khumo and Joanie aced it in the next round, while Sanet and Jason fought for the last safe spot in a spice showdown that Sanet won. And so it was pressure test time for Jason, Karen and Neil.

“Warning: this content is not suitable for sensitive viewers”

Meanwhile, the winning blue team couldn’t wait for to celebrate their restaurant reward, which was a trip to the renowned Pierneef à La Motte in Franschhoek for a Masterclass with chef Chris Erasmus.

“Our way of cooking at Pierneef is much inspired by the first settlers who came to the Cape. We cook from our backyard, we cook in-season, and we use techniques with lots of curing and smoking,” Chris explained. He showed Herman, Mary, Kamini, Tiron, Ozzy, Amanda and Seline how to make the perfect terrine using the whole head of a pig. Ozzy was a bit taken aback but not too “freaked out” and Chef Erasmus went to work on the pig head.

Apart from the masterstrokes shown by chef Chris, the social networks were buzzing afterwards about the conflicts of using a pig head and Ozzy’s Muslim background. But DStv assures us there was no transgression, disrespect or ill intent, and Chris had kindly prepared another dish for Ozzy.

Back to the pressure test: the contestants had to duplicate one of Pete Goffe-Wood’s famed dishes, a pan-fried, line-caught white stumpnose with a fennel and saffron risotto and a little niçoise salad. Pete explained the three crucial elements for the contestants were the fish, the risotto and the dressing for the salad. “You need to give this your all,” cautioned judge Benny Masekwameng, “because your apron is on the line.”

The judges had concerns about Jason not knowing how to prepare the risotto, and Neil’s preparation of the fish.

First up to face the judges in the taste test was Karen. While the portion of fish she served was a bit dry (Pete did get the thin end of the fish, he admitted), he was happy with the risotto. Benny, the king of seasoning, was quick to point out to Neil that basic salt-and-pepper seasoning was lacking in his dish and that his risotto portion was too big.

And finally it was Jason, who had never cooked risotto before. Judge Andrew wasted no time in saying, “That to me is not a risotto!” (Here’s how to make risotto like a proper Italian.) But in the end, it was Neil’s turn to hang up his apron and bid farewell to the MasterChef team.

Next week, the top 13 meet the judges for a challenging invention test.

“The ginger ninja!” shouted purple-haired Sanet, after getting one of the spice combinations correct.