Sometimes a restaurant doesn’t have to be complicated. Bertus Basson’s latest project, The Deck at Hidden Valley, is incredibly low key and that, says Eat Out critic Katharine Jacobs, is what makes it special. 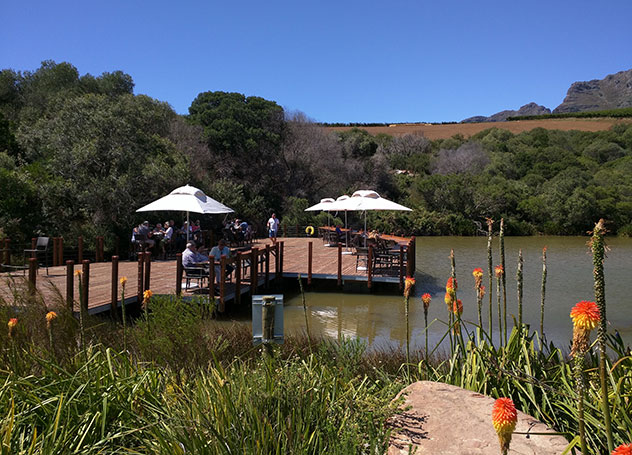 The Deck looks up towards the mountains. Photo by Katharine Jacobs.

Serves: Two dishes only
Best for: Relaxed summer lunch in the winelands, with a stellar view
Cost: R125 for a main
Parking: On the Hidden Valley Estate, but more parking is being built behind Overture, so don’t be distressed if you can’t find a spot out front
Star rating: Food 4, service 4, ambience 5

Overture may be a Top 10 restaurant, but, as chef Bertus Basson has evidently realised, there’s more than one way to skin a cat. His new venture, The Deck, which opened on Saturday 11 March, serves precisely two dishes, which means they had better be damn good. 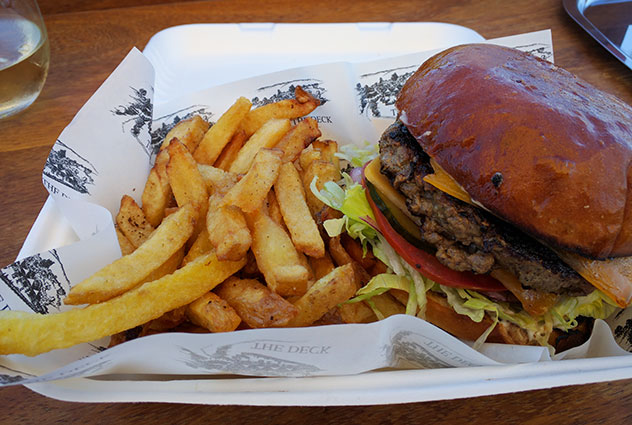 On the day in question, the Wagyu cheeseburger arrives on a buttery toasted brioche bun, with a touch of pink in the centre of the patty and the usual vegetal inclusions for crunch. If I was quibbling, I’d ask for more mayo and pickles, and maybe a mite more pinkness, but it’s still one of the better burgers I’ve had in recent months. (Plus, I dine here on day two, so in a week or two, that’ll likely be ‘best’). The clincher, though, is the portion of crunchy-sided chips, which my partner describes as “mucking afazing”. 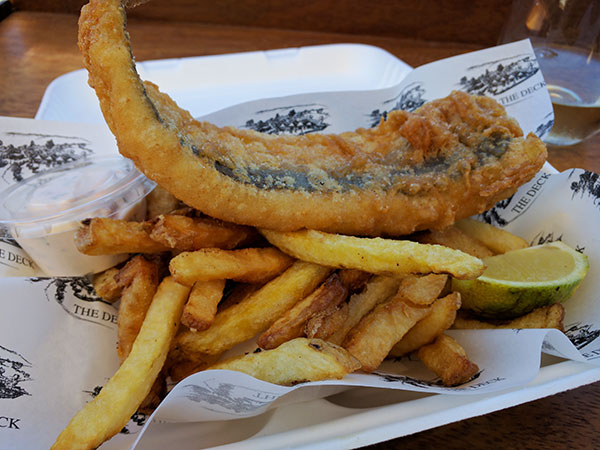 The stellar fish and chips. Photo by Katharine Jacobs.

Though I’m sure the burger will be popular, it’s the other dish on the menu that is the winner for both of us: the fish and chips. Succulent, softly flaky hake comes in a light, crisp batter, with a superb house tartare sauce. It’s utterly simple, but the fish is perfectly cooked – not the least bit dry or overdone – so that it becomes something far better.

The drinks menu is a row of bottles: soft drinks, water, a red and white Hidden Valley option by the glass, both made specially for The Deck by the farm, plus Hidden Valley bubbles (brut and brut rosé). The white, a sauvignon blanc, is eminently quaffable and only R40 a carafe, so we’ve got no complaints. 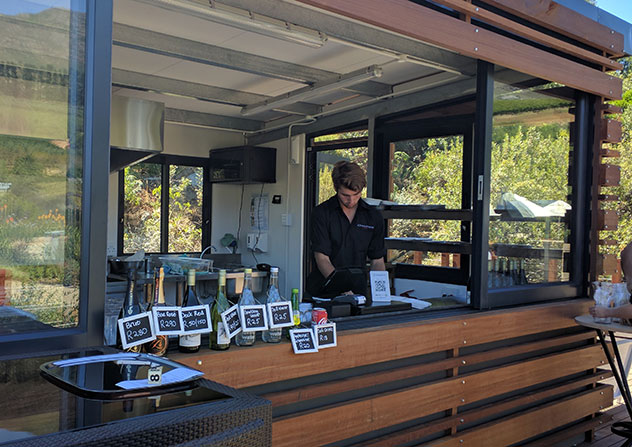 The self-service counter, plus ‘wine-list’. Photo by Katharine Jacobs.

This is the other way in which the restaurant differs to most winelands experiences: You order and pay at a hatch and then find yourselves a seat. We’re told to return in 10 minutes to check if our order is ready, but we linger a little too long and a kind chef brings our food out on a tray. On busy days, which are almost certainly coming, they may need a notification system – a man waving a table number? A shouting chef? – or just a runner to take food to tables. 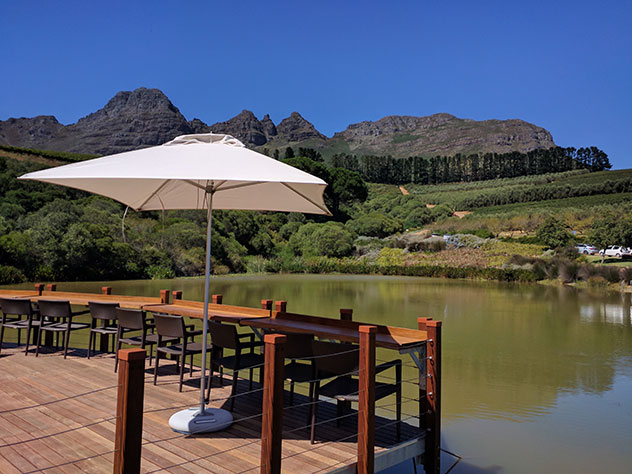 The Deck has one of Stellenbosch’s best views. Photo by Katharine Jacobs.

The Deck is just that: a broad wooden deck, built out over a dam, looking up at the looming mountains. It’s all outdoors, with a handful of umbrellas. Basically, it’s the part of the restaurant that everyone wants to sit in, without the bothersome attached restaurant.

We relax at the bar-style seating at the deck’s edge, where we watch the dabchicks and the moorhens busy in their dam, and look up towards the mountains where an eagle is circling. 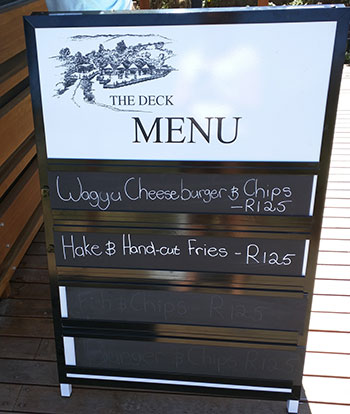 For now, the team are trying out the concept with just two dishes, though they may increase the offering slightly at a later stage. Photo by Katharine Jacobs.

(To be honest, ornithology is not my strong suit. We spotted things that looked like ducks, but weren’t ducks, and a bird with an impressive wingspan, but which could have been any bird of prey. There were also fish, and one of those elegant blue birds with the long, balletic legs. A crane?)

It’s a thoroughly lovely spot to refuel after a morning of wine tasting.

They don’t take bookings, so go earlier rather than later if you want to be assured of a shaded table.

Have you been to Bertus Basson’s newest country-style eatery? Write a review of The Deck and Eat Out will pledge a meal for a hungry child through Stop Hunger Now SA. Get writing now.