Sharing is caring at The Mess in De Waterkant

In the eighth installment of his column, Forked Tongue, Ami Kapilevich tries to make a food-sharing philosophy work in his favour.

“Our menu emphasizes sharing plates of enjoyable food,” declares the website of The Mess. “We love food… and good food is meant to be shared.” 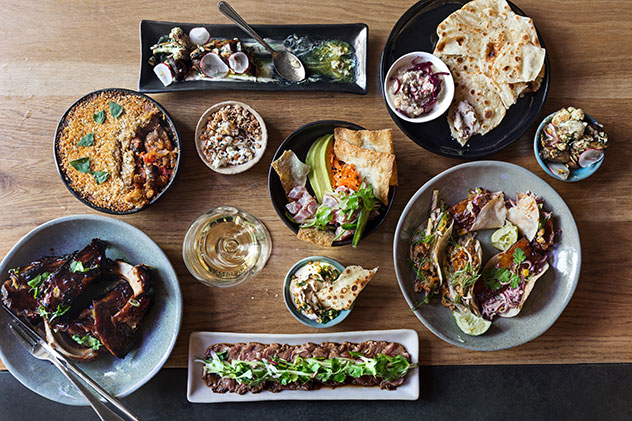 A selection of tapas dishes at The Mess. Photo supplied.

I am not a fan of tapas-style share-a-thons because, at best, they’re a bit of tease. But my wife Michele has a maddening knack for ordering better dishes than me at restaurants so this was an opportunity to not just sample but flagrantly eat half of her main course. Something I’ve been wanting to do for a while.

The restaurant is situated along the strip of eateries below The Rockwell Hotel in Green Point, on the other end – in more ways than one – from my more regular haunt, Vasco da Gama Tavern. As we were shown to our tiny table up against a railing, I cast wistful glances at the larger tables and booths in the rather empty establishment, but did not ask to be moved to one of those because there’s probably some etiquette which involves cramming a table of two into a space the size of a five rand coin that has something to do with intimacy and romance, both of which I wanted to make abundantly clear my marriage is full of. 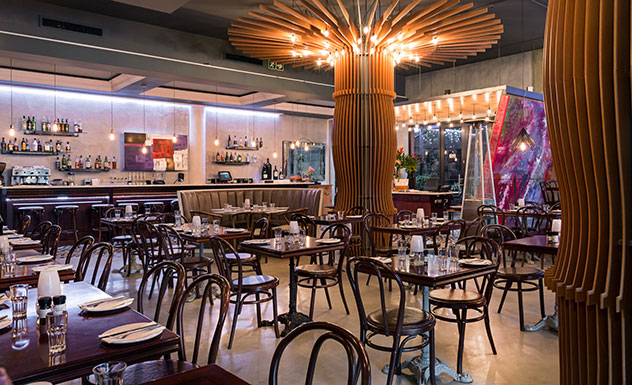 The wine list did not have any merlots, which is weird, and our waitress couldn’t explain why, which wasn’t the end of the world, so I toyed with the idea of splashing out on a bottle of the Anthonij Rupert Optima, but settled for the slightly cheaper Rupert & Rothschild Classique, which is a merlot blend, instead. 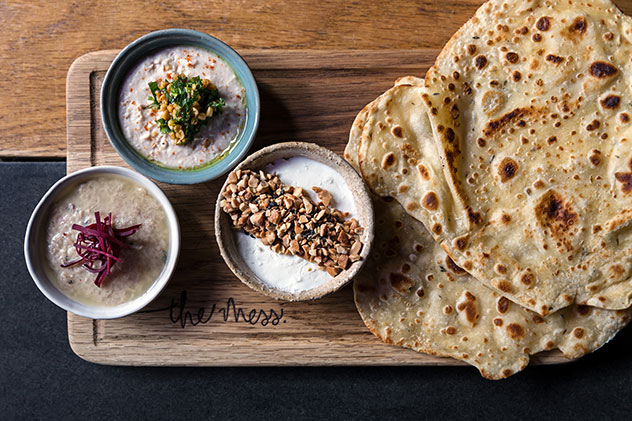 The flatbreads and mezze. Photo supplied.

“Leave a menu,” I told the waitress. “We’ll order mains later.” My plan was to let Michele do her magical ordering trick and then work around that.

The beef tataki – seared Angus beef tenderloin topped with shredded cucumber and mooli (a type of Asian radish), in ponzu sauce – was tasty, but the slivers of meat were slightly overwhelmed by all the condiments and sauce so I scraped some of it off.

And I’m usually a big fan of dips and spreads, but the pickled goat’s cheese with nut dukkah was as sour as a third-placed MasterChef contestant – but I hasten to add that this was Michele’s favourite starter so don’t take my word for it. 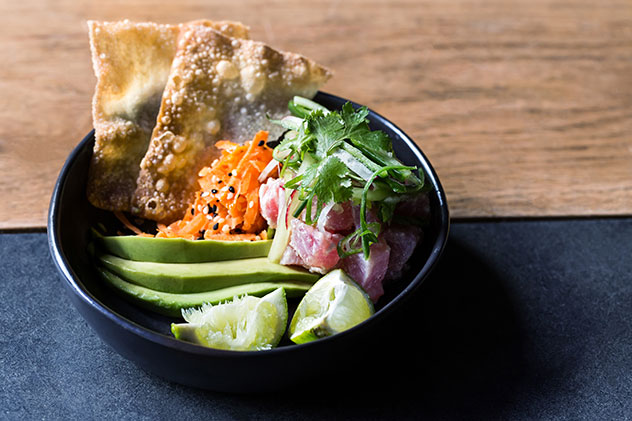 The highlights for me were the two ceviches. I’m not sure if it’s strictly correct to call the cucumber-and-apple dish a ceviche because there’s no fish involved, but the result was splendid: crisp shredded cabbage steeped in a zesty citrus juice. Far from my usual cup of tea, but in the end one of those rare dishes that makes you feel like a better person for having eaten it.

The tuna ceviche was served on a wonton tostada and garnished with coriander, which conspired with the spring onion, avocado and lime to release a lot of serotonin in me. (No, really, salmon contains a lot of tryptophan, which is the amino acid that your body makes the happiness hormone out of.)

The waitress came to take our mains orders. The moment of truth. Time to test my main course against that of Michele’s choosing, and then eat her food! It was difficult to hide my excitement but I had to play it cool. 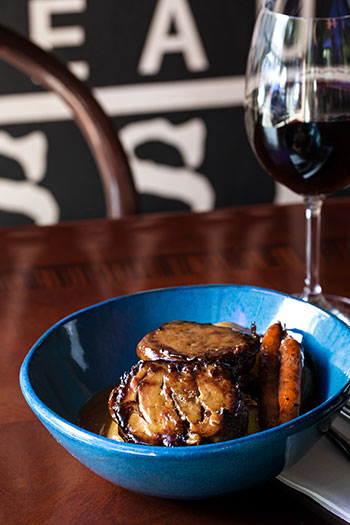 “So what are you going to have?” I inquired with nary a warble.

“You know, I’m actually really full after all those starters,” she said. “You hardly touched the goat’s cheese, and I ate most of the beef tataki. Why don’t you order a main and we’ll share it?”

My heart dipped. I said: “Okay, but why don’t you choose rather?”

“No, I honestly just want a few bites – you go ahead. It’s all about the sharing here, right?”

“Yes, but I want you to order the main.”

“Because you always order better than me.”

“What are you talking about?”

“When we go to restaurants your food is always better than mine, so I want you to choose the main course. And then I want to eat it.”

“So you want me to order your main course?”

“No, I want you to order yourself a main course, which I can eat.”

Michele shook her head and looked at the menu.

“I would order the lamb neck,” she said, “but you don’t like lamb.”

It’s true; I am not a huge lamb fan unless it’s in a stew, or cooked in a mysterious way that only a dear friend (who has since emigrated to Switzerland) is able to pull off. Which makes it perfect for this experiment. 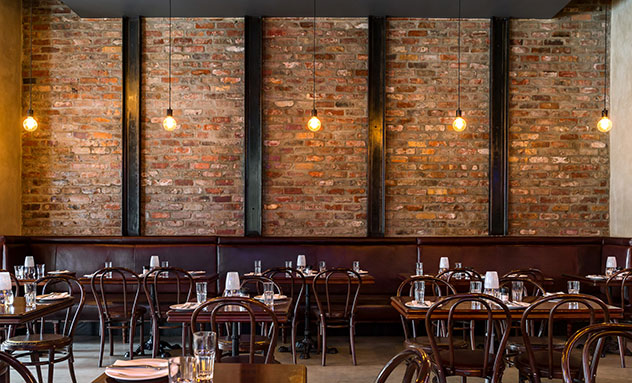 The lamb neck was a triumph. So soft and succulent that it may as well have been boiled in a stew, with polenta that soaked up the rich gravy like applause. And the dish was definitely designed to be shared: two generous medallions, of which Michele only nibbled one and left the rest for me. We even ordered a bottle of the Optima in lieu of the other main course.

I’ve already begun to plot the next stage of my experiment: We’ll go back to The Mess and I’ll order the lamb and see if Michele’s choice is better than mine.

If it isn’t, then she has an instinct or talent that needs to be utilised to our mutual benefit. If it is, then I may have a bit of a problem in the greener-grass department. Either way, I look forward to testing the hypothesis. 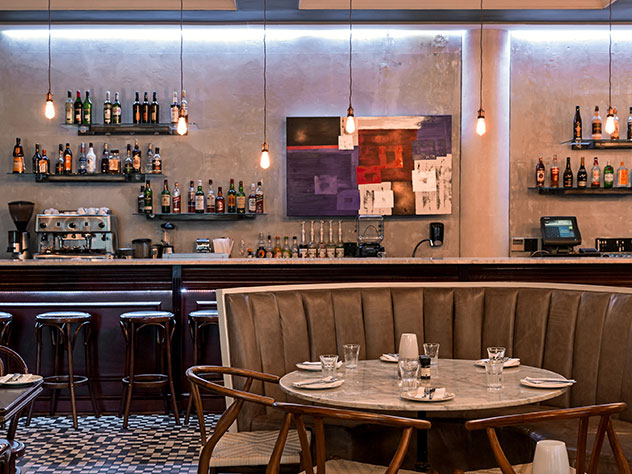 The bar area at The Mess. Photo supplied.