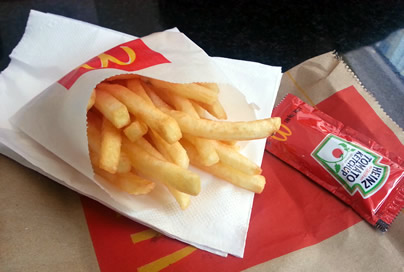 Always keen to perform our humble duty, and inspired by this story on the definitive ranking of USA’s fast-food French fries, we decide to do our own version on local takeaway chips. (Read last year’s related article, where we pitted Burger King against Steers and McDonald’s.)

Maps in hand and wearing stretchy jeans, we bravely hit the city streets to consume eight portions of hot chips. Along the way, we dodge jaywalking charges and fight the urge to collapse into racks of baby spinach, but at great personal cost, Eat Out staffers Tina Kapoutsis, Katharine Jacobs, Lauren Josephs and Linda Scarborough bring you our ranking of the best takeaway chips in South Africa.

To make this safari geographically balanced, we only included the large takeaway franchises/brands that are available across South Africa. (For what it’s worth, our favourite real-deal slap chips are from Lusitania Fisheries down the road.)

Jaundiced and pale, these poor specimens have almost zero flavour. “We need to dress them up with something,” Lauren says charitably, reaching for a packet of salt. But nothing can save them. “Terrible terrible terrible taste. Terrible,” intones Tina, with Katharine weighing in, “They taste like why.” 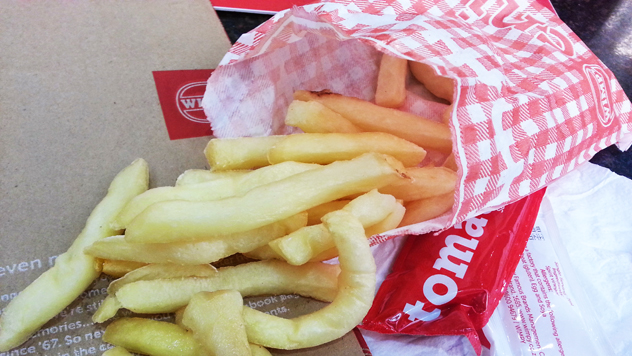 I’d never heard of Hungry Lion before and today I find out why. The chips, though very crispy, have an awful, acrid aftertaste that not even lashings of plasticky sweet tomato sauce can mask. Also worth noting is that on the day we darken their doorway, the Adderley branch claims not to have any change, pocketing the extra 10c and 20c for every item that isn’t a round number. 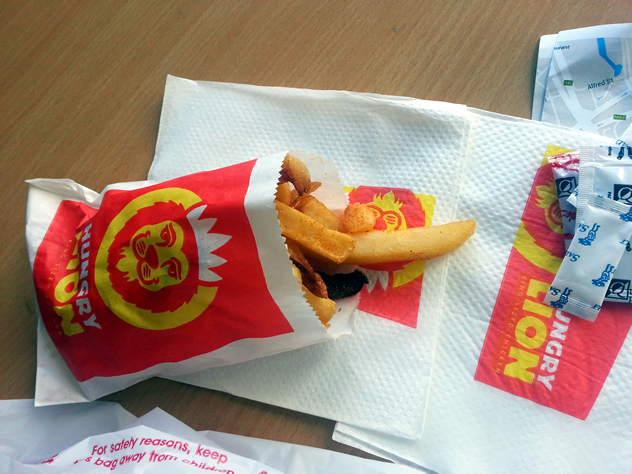 It was news to me that Spur does takeaways, but the incredulous team enlightens me and we sink onto the cow couch and await our cardboard container. The slightly stale skinny fries that arrive are so sad-looking and anaemic, with no seasoning at all, that we decide to repurpose them as a vehicle for Spur’s famous pink sauce. “If these came with a steak I’d eat the meat and just forget the chips,” says Lauren, frowning slightly. Tina concedes that she would eat the chips, but only with litres of pink sauce. “Actually, I’d probably even eat the cardboard box if it was dipped in this!” Tina declares, and can be heard tenderly whispering “I love you” to the sauce bottle as we leave. 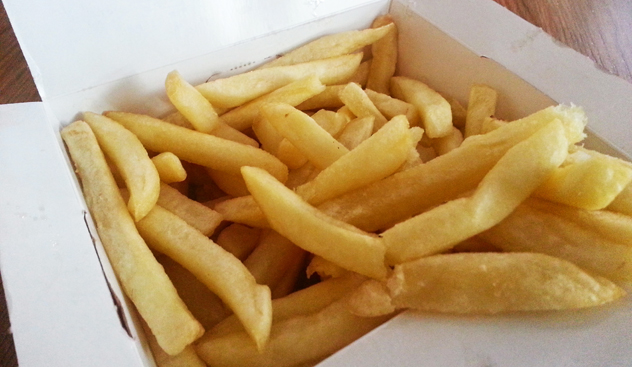 The takeaway chips from Apache Spur

R5 (‘Small change big smiles’ promotion)
Rating from 1 (slap) to 10 (crisp): 7
By this stage of the tasting we all have severe starch fatigue, but this chip offering is at least reliably McDonaldsy: very skinny and sporting a gorgeous golden colour. You can’t mistake their appearance and taste as belonging to any other brand, but the fries are kind of hollow, with no creamy interior beneath the collapsing crust. “They taste oddly not like potato,” quips Katharine. “That must be the anti-vomit agent!”

R10 for a small
Rating from 1 (slap) to 10 (crisp): 8
More than a year after opening, Burger King is still seemingly getting its chips together. On the afternoon of our safari there are 30-minute long queues, the beef patties have run out, and the place is teeming with groaning zombies. Once we escape with our order, we note that the chips have a glowing hue and great texture that’s fluffy inside and crunchy outside – probably the best of them all – but they taste sort of like corn. (Maybe that’s why they’re so yellow?) Extra credit though for tangy mayo and good ketchup. 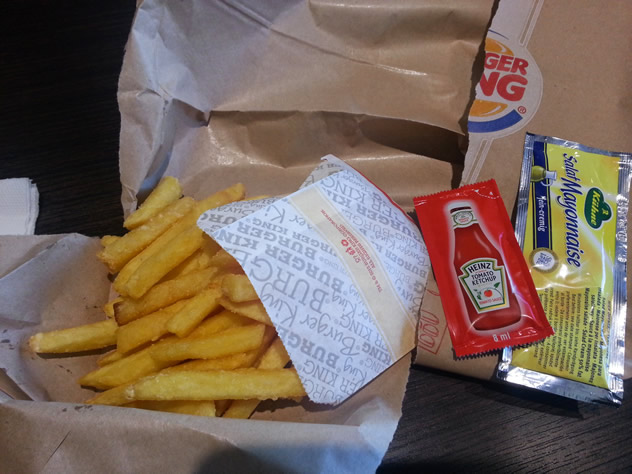 R16.50 for a small
Rating from 1 (slap) to 10 (crisp): 6
The chips inside vibey Nando’s are pretty good and the sachets of evil orange peri-peri seasoning make them even better. The medium-thick fries taste fresh, have a good crisp outside with soft inside, and stay piping hot for ages. “Good squishiness,” observes Katharine. “They’re a little floury, but they taste quite wholesome. Like actual potato.” Bonus points for the sachets of Nando’s Perinaise dip. 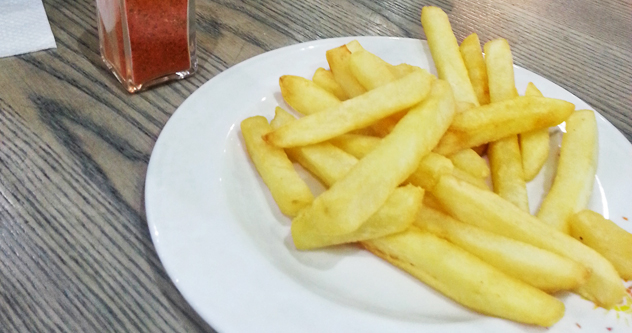 Small R5 (‘Ka-ching’ promotion)
Rating from 1 (slap) to 10 (crisp): 5
While KFC feels a bit tacky inside and isn’t necessarily your first stop for fries, we are pretty impressed with their chips’ taste, texture, seasoning and value for money. The skinnyish chips arrive in less than a minute after we order, with a perfect sprinkling of spice. Katharine reckons they taste just like KFC, wondering if it’s due to the traces of fried chicken floating around the room. These chips are best inhaled when hot, as they tend to get a little dry when more than a few minutes old. (But in most instances they won’t make it that long.) Tina pronounces them perfectly “potato chippy”. 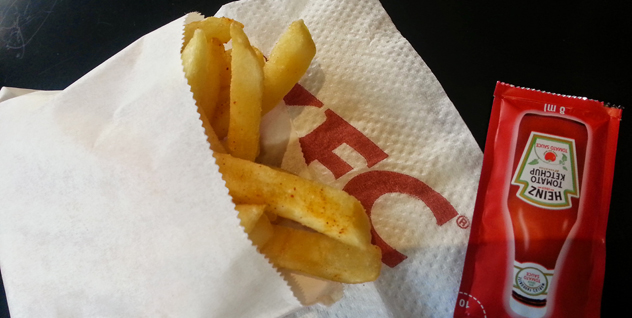 R13 for a small
Rating from 1 (slap) to 10 (crisp): 5
The Strand Street branch welcomes us with warm wooden interiors, inviting upholstered furniture and frantic dance music. The super-hot chips appear in different lengths and thicknesses – evidence of their having been ground-bound vegetables at some point – and sprinkled with that amazing Steers spice. While they are a little oilier than the rest, the chips are really creamy inside and the gift just keeps on giving in the form of those crunchy bits in the corners of the bag. 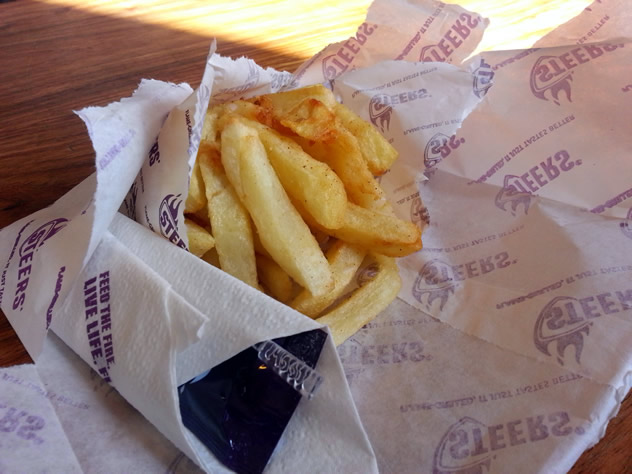 One chip to rule them all: Steers chips

Which is your favourite brand of takeaway chips? Let us know in the comments.