Celebrating the humbler dishes in life 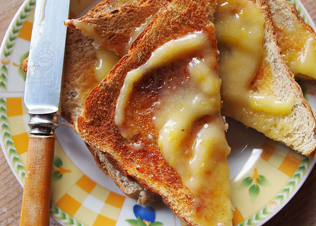 I’m writing this newsletter on Sunday morning in anticipation for this time next week, when we’ll be arranging the final seating plan and the chefs will be cooking up a gee-whizz feast, amongst other crazy preparations, for the 2012 Eat Out DStv Food Network Restaurant Awards.

But this morning, I’m just eating a simple slice of toast, inspired by a delightful flick that I’ve just finished watching, called Toast.

It’s all about my best-loved food writer Nigel Slater. Nigel writes for my favourite Observer Food Monthly, where he showcases simple recipes and tells evocative stories about food, and he’s just been named that publication’s food personality of the year.

His remarkable account of his childhood and his love of food was published as an autobiography and has since been made into a movie, which shares his food memories of growing up – some good, but mostly very uninspiring.

His mom couldn’t cook an egg to save her life, but she could make a slice of decent toast. Sadly, she died just after she taught him how to make her Christmas mince pies. Nigel craved the pork pies at the local butcher down the way, which he was never allowed to have. Canned beef, boiled in its tin, was their daily dinner regime. As a young boy, Nigel made friends with their local veggie gardener and grew to love and understand fresh produce. This inspired his vegetable garden book called Tender.

Nigel Slater is an inspiration, and he makes me crave a slice of toast or two, even if it’s just spread with melting butter, with the crust crunchy and the inside still soft – just the way toast should be.

Have a great week and keep your eyes peeled on Twitter @Eat_Out  (#eatoutawards) and the website on Sunday night to see the new Top 10 as they’re announced, and all the other winners for this year.