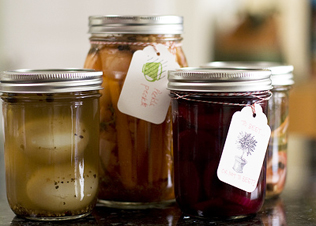 Ever tried rooibos-pickled duck’s egg or honey-pickled cucumber? Whether you think pickling is a new trend or simply revisiting an old way of life, it’s definitely happening right now. We caught up with fans of this technique at some of SA’s top restaurants.

The salty-sour result when vegetables, fruit and seeds are fermented in briny vinegar is popular around the world. In India they pickle mangoes, limes and cauliflower; in China, radishes and cabbage; in Japan, daikon, plums and ginger; in Korea, the famous kimchi; and in Northern America you can even find pickled pig’s feet, quail eggs and sausage.

Closer to home, many of the country’s top chefs, from roots out in the country to DW-Eleven 13 in the slick city, are flexing their pickling skills.

“I pickle the world!” laughs Eric Bulpitt, chef at The Roundhouse, a Top 10 nominee for 2012 and number four in the Top 10 and winner of the Service Excellence Award in 2011. He and his team have been preserving rosebuds, rosehips, leek flowers, parsley flowers, fennel flowers, young coriander, fennel, nasturtium berries and so much more since he returned, inspired, from a trip to Noma (number two in The World’s 50 Best Restaurants) years ago. “Since 2009, 2010, I’ve been pickling and curing and gaaning on,” Eric says. “But you can never stop learning.”

Rudi Liebenberg at Planet Restaurant (a Top 10 nominee in 2012 and 2011) at the Mount Nelson pickles beets for a short period to preserve the earthiness, while fennel and cucumbers get a longer treatment. Rudi also love pickling root vegetables, and he makes loads of lemon atchar and up to six different chutneys for the hotel.

Christiaan Campbell of Delaire Graaff Estate Restaurant (a Top 10 nominee in 2012) is pickling pine rings (in abundance at the moment) as well as baby beets, turnips and carrots.

These chefs are avid supporters of Steve ‘The Magic Man’ of Magic Herbs, winner of the 2013 Eat Out Produce Award for best organic producer.

Why should you pickle?

From a culinary point of view, pickling is a way of bringing in new flavours and textures, says Christiaan. “Pickles have a vibrato acidity to them which can help balance the palate of many dishes.”

Rudi has a more down-to-earth approach. “No sandwich is complete with out a great pickle even on the side! Then, of course, it gives contrast, gets the saliva going and the beer flowing.”

When Eric went to Noma, part of the whole experience was getting in touch with old-school ways – pickling and curing. So, for him, pickling showcases an old technique of preserving things.

Chris agrees. “It pays homage to how slow food used to be – cooking only what’s in season. If you want the ingredient in another season, preserve it yourself!”

Preserving seasonal ingredients ranks high on the list of reasons to pickle, as keeping menu items local has become essential in recent years. Pickled Jerusalem artichokes, wild mushrooms and leek blossoms, for example, can then be used throughout the year in an “excitingly altered form”, to use Christiaan’s phrase.

The taste of ingredients does, however, change slowly as they mature in pickling liquid. “They get a depth of flavour; and berries start fermenting. The fermentation process adds lactic acid and results in those moreish umami flavours,” says Eric.

While Asians and Eastern Europeans have been pickling for centuries, Chris’s menu at Pierneef is influenced by the first sailors and settlers who brought the technique to the Cape after spending long months at sea. And salt, sugar and air-drying techniques are all still used in South African cooking in the form of biltong, droëwors, preserved quinces and figs, bokkoms and smoked snoek.

Christiaan of Delaire Graaf also notes the section on pickling in Kook en Geniet, a classic South African cookery book first published in 1951. “When people had more time on their hands, they would pickle any excess vegetables of the season.” When asked why this technique has become ‘trendy’ again, he answered, “I believe people are looking for a better, more meaningful life. This could be as simple as making time to pickling at home with the family.”