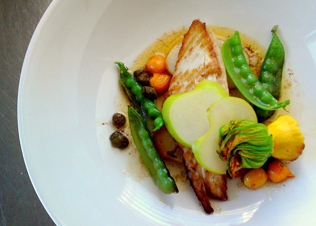 Hot dogs and cheesecake: not food you’d envisage at a fine dining restaurant. Not even what you’d expect at your favourite local restaurant – unless you live in a car park with friendly neighbours in roller skates. Yet, 2012 promises to see South African chefs experimenting with these classics and a few other (greener) options.

The secret of the source
More than ever before, chefs will focus on ingredients – their quality, origin, locality and preparation. And fortunately they don’t necessarily keep this information to themselves. Joburg’s The Leopard proudly proclaims on their menu that they only use grass-fed beef and free-range chicken and eggs, that their milk, cream and cheese are from small producers who do not use growth hormones or antibiotics, and that all their seafood is on the SASSI green list.

In Cape Town, Clarke’s Bar and Dining Room – the new kid on the cool Bree Street block – lists its suppliers on the menu and highlights the fact that they only use free-range beef.

Writer and now meat merchant Andy Fenner of Frankie Fenner Meat Merchants is one of the disciples of the nose-to-tail concept of eating: “It is something incredibly close to my heart and I’d like to see more than sirloin, fillet and pork belly on menus. Chefs are starting to realise that South Africans are ready for things like brisket, flank and cheeks.”

Andy no doubt refers to restaurants like De Kloof, Bizerca Bistro and Down South, where brisket and beef cheeks are becoming menu regulars. He continues, “Importantly, this applies to vegetables too. Clever use of vegetables means parts that are generally thrown away can be stars. At The Pot Luck Club Luke Dale-Roberts is serving curried celery leaves with parsnip chips and black pepper. It’s laughably simple but also sort-of genius.”

Chefs as gardeners
So yes, in 2012 chefs’ love affair with their vegetable gardens and – if they’re lucky – their fruit orchards, will continue. They are becoming gardeners, getting intimately involved with planting seeds and nurturing vegetation. The result is magnificent organic fruit and veggies, lesser known root and heirloom vegetables, and interesting fresh herbs on our plates.

“Forgotten heirloom vegetables are some of my favorites to cook with,” says Chris Erasmus, chef at Pierneef à La Motte in Franschhoek. He uses the vegetables grown in his on-site garden abundantly in his Winelands cuisine.

Likewise, at Jordan Restaurant in Stellenbosch, chef George Jardine uses the flowering coriander, artichokes and broad beans that grow in between his homemade smoking barrels in his masterfully simple food. Jackie Cameron, heaf chef of Hartford House in the Natal Midlands also delights in her garden: “Healthy products that are as local as possible are always a hit. I almost see the guests’ eyes light up when I mention the proximity of most of my producers. And even more so when I say I have picked it fresh from my herb garden.”

And we haven’t even begun to talk about the magnificent gardens at Babel on Babylonstoren… undoubtedly the envy of every chef in South Africa.

It’s not unusual to leave restaurants with a doggie bag. These days, the must-have bag contains ingredients and fresh produce – and maybe a hard-to-come-by phone number. Says Jackie Cameron of Hartford House, “Many patrons are asking to take ingredients home with them. I am often giving out suppliers’ names and contact details.”

So too do restaurants and diners get inspiration from fellow diners. Maranda Engelbrecht, food stylist and consultant and one of the masterminds behind Babel, explains, “Fresh teas from the herb garden, combined with fragrant blossoms and served with fresh honey from our garden bees, inspire our guests to make their own blends. They are encouraged to write their recipes in our tea menu book.”

The new traditional
Twisting grandma’s recipes into new incarnations is growing in popularity too. Again, Pierneef à La Motte is at the forefront with their bread soup, bokkom salad and other interesting takes on recipes that have been used in the Cape Winelands for the past three centuries. Other restaurants following suit are Fyndraai at Solms Delta and Bosman’s in Paarl – the latter known for their spiced banana mousse on shortbread with delicious melktert ice cream.

Which brings us to the sweet stuff. It might be the time of year, but the fact of the matter is that ice cream is everywhere. Says Andy Fenner, “Chefs have moved past doing savoury ice creams as a ‘wow’ factor and are now really using it to add something to the dish. Kobus Van Der Merwe (of Oep ve Koep) once served me corn ice cream with tomato jelly. It was one of the best desserts I’ve had because it made sense. The ice cream wasn’t there just for the sake of it.”

So it seems that what’s old is definitely new again. True to the trend, Eat Out editor Abigail Donnelly foresees the comeback of another classic in her last word on desserts this year. “I predict cheesecake will be cool again!”