Trend alert: where to buy cronuts in South Africa 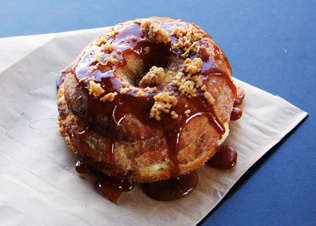 First came cupcakes, then macarons, then cake pops. Now there’s a new queen of the confectioneries: cronuts. A cronut TM is essentially a deep-fried ring of croissant dough. Wait… what?! Yes, we know. But before we debate whether this is in any way acceptable, let’s take a look at their provenance.

The pastry was created by Parisian-born baker Dominique Ansel at his eponymous bakery in New York in May, and was soon drawing Tweeting-Instagramming-Pinning crowds. On any given morning, queues stretch around the block in Spring Street, NY, driven, no doubt, by Ansel’s shrewd decision to trademark his creation. The official website advises arriving prior to 6am on a weekday to be in with a chance of getting one, a good two hours before the bakery even opens. In response, a thriving black market has sprung up on online classifieds site, Craigslist, where enterprising New Yorkers are peddling the pastries for as much as $30 apiece. Doughssants, zonuts and croissnuts in every flavour from red velvet to salted caramel, began appearing at bakeries elsewhere in the States. Folk in Boston, Chicago and Toronto began producing cronut burgers, (something that evidently upset some kind of karmic equilibrium, as 200 people came down with food poisoning at a Toronto bakery, thanks to some jam contaminated with a bacterial toxin). In recent weeks, the pastry hybrids have popped up as far afield as Manila, London, Australia, Jakarta, Brazil, Taiwan and South Korea. And now, they’re in SA.

“It was the best thing ever”

These are the words of editor Abigail Donnelly, when I enquire about a picture of the Schoon De Companje iteration that she’s somewhat cruelly mailed to me. Crispy and crunchy on the outside, with a light vanilla cream inside, they have her gushing.

I decide to get out of bed very early on a Saturday morning to try the Jason Bakery ‘dough-ssants’. Filled with custardy-cream and apple, rolled in cinnamon sugar and topped with hard toffee apple glaze and bits of crumble, they’re not just croissant-doughnut hybrids, they’re toffee apple and apple crumble mashups too. Isn’t it all too much?

Absolutely, 100%, too much. In no way acceptable. And yet, I know that right now you’re dialing Jason’s number to pre-order yours, because you absolutely have to try next Saturday’s flavour. (No judgment.)

Despite this, I’m curious to know what a plain cronut tastes like, without all the trimmings. The solution arrives in the form of a box of cro-nuts from Coimbra in Claremont, where the team is making cro-nuts with cinnamon sugar, chocolate glaze and white chocolate glaze with cranberries, without the cream filling. That they’re insanely rich goes without saying, but I’m pleased to report that they’re also crispy on the outside, and beautifully layered inside. Our favourite is the cinnamon sugar version, which (almost) makes sense. (Not that we’d advise actually eating a whole one by yourself, of course).

So what’s the secret to getting them light? They are certainly very tricky to get right, admits Venessa Smith, creator of the wondernuts at Remo’s Mount Edgecombe and Umhlanga. “Everything, starting from the pastry lamination process to the degree of heat in your oil to the exact amount of time to proof them, needs to be exact… If we use butter that is too crumbly or wet I get a very heavy cronut.”

Where to buy cronuts in South Africa

The flavours: caramel, chocolate, coconut and strawberry ?The damage: R25

The flavour: rosewater and vanilla ?

The damage: R55 (includes a coffee)

Taking a leaf out of Dominic’s book, the supply of these “dough-ssants” is limited. They’re only available on Saturdays and a new flavour is debuted each week. Past flavours have included mixed berry tea infused white chocolate ganache; beetroot and dark chocolate with honeycomb dust; dark chocolate pistachio fudge and salted caramel; peanut butter and jelly; and, most recently, apple crumble with custard, and a hard candy toffee-apple-esque top.

The flavours: chocolate and vanilla

Food mash-ups are the latest hot trend in the States. We’ve also heard tell of the wookie (a cookie baked inside a waffle maker) the deep-fried lasagna burger and the ramen burger, in which the buns are replaced with circles of ramen noodles.

We probably haven’t been able to find all the cronuts/cro-nuts/doughssants there are in SA, so please let us know on Twitter or Facebook if you come across some. We will gladly add to the list – and expand our waistlines in the name of science.