Why bananas are the worst 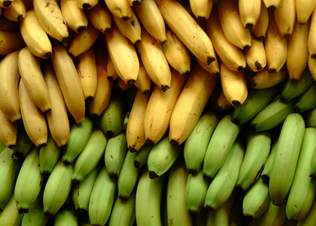 Ever since I was a baby, I’ve hated bananas. Back then, I knew that they were the worst, but I lacked the reasoning faculties to explain this to my bemused mother. Now, I am pleased to bring you 10 highly scientific reasons.

1. Their natural packaging is dangerous

Actually I don’t really know how this comic trope came about – since banana peels aren’t particularly slippery – but when it comes to discarded foodstuffs, there’s nothing more offensive than a banana peel lying on the pavement. (Except perhaps for discarded chicken bones. What, I must ask, is that about?).

2. You can see your teeth marks when you bite into bananas

I can’t explain quite why I find this so horrifying. Perhaps it’s because we don’t normally get to see our teeth. Or because teeth are kind of icky. Or because the softness of the banana carved by your own teeth is kind of icky. Anyway, I find it strangely alienating. Like those puppies on Youtube, who bark at their own reflection.

3. Artificial banana flavour is the worst

And thanks to the similarity in colour between bananas, pineapples and lemons, unsuspecting bananaphobes are often tricked into eating banana-flavoured sweets. (You can avoid yellow sweeties all together, but then you run the risk of missing out on all the other yellow flavours, and non-flavoured yellow sweets, like our favourite, Speckled Eggs).

I suppose I should’ve opened with this. After all, the reason that artificial banana flavour tastes so bad, is that it appears to be (very loosely) based on the actual flavour of bananas. Which is baffling, since bananas taste bad. Like Darth-Vader-The-Joker-Anne-Hathaway’s-Oscars-dress kind of bad.

5. Bananas have an upsetting appearance

“When I’m walking down some street in midtown and I see well-dressed men and women shoving bananas into their mouths with a chimpanzee’s complete lack of self-consciousness, I look at them and think, Well, it’s not the banana’s fault it looks that way,” says Roz Chast in the New Yorker. Roz makes some good points, but I would argue that it is in fact the banana’s fault that it looks like that. Who else’s fault could it be? It’s certainly not mine. Think of all the other fascinating shapes the banana could’ve chosen to be! Smooth, round and orb-like, like grapes; or voluptuous and curvy like an avocado. It could’ve been beautiful and bright, like a beetroot, or dusky and moody-coloured like the blueberry. Let us stop enabling the banana by shifting the blame.

6. Banana Republics are a bad thing

They’re either run by a hideous dictator, or home to very expensive clothes that I want to buy, but can’t afford. Both kinds of Banana Republics make me feel sad.

(Which are the worst.)

8. You can make them into plastic

Which, if you ask me, should be a major cause for suspicion. See here, if you don’t believe me.

9. When bananas go off, they transmogrify into something evil

Most fruits are pretty yucky when they’re past their prime. Apples go floury, strawberries pale and start oozing thin red juice, and avocados brown under their skins. Bananas, however, transform into a wholly different, Hulk-like thing. A visiting friend once left a bunch of bananas behind my toaster. When an ungodly smell led me to discover them a month or so later they had turned into an oozing mass of radioactive sludge. I may never recover.

They’re full of potassium, they’re great for hiking, they come in their own packaging blah, blah, blah. Is there any other fruit quite as self-righteous as the banana? Not for them the joyful little cells of the orange, which pop in the mouth, the flirty tang of the strawberry, or the flamboyance of the pineapple. If they were people, bananas would be those Facebook friends who constantly post petitions – the ones about bottlenose dolphins in Uzbekistan or the oppression of loot players in Northern Canada. And I would de-friend them with extra vim.