Why you should eat top to tail 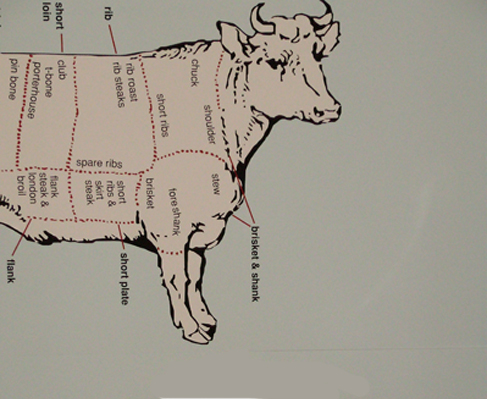 “An animal has given its life for us to enjoy the meat. The least we can do is stretch it as far as possible.” So says Andy Fenner of Frankie Fenner Meat Merchants, a Cape Town based outfit dedicated to what they call ‘proper meat’. Nose-to-tail eating is a growing trend, with fine dining chefs now creating dishes with more unusual – and previously undesirable – parts of an animal. The jury’s still out on whether smilies will take off, but cheaper cuts of meat certainly have.

In the beginning
Andy says it all began with the now-ubiquitous pork belly. “A few years ago suppliers couldn’t give those away. Today, they’re everywhere and are treated as luxury dishes.” Indeed, a quick look on the menus of La Colombe, Radisson Blue Gautrain Hotel Restaurant, Reuben’s and Bistro Sixteen82  (among many others) reveals this to be quite true.

Bertus Basson of Top 10 restaurant Overture reckons nose-to-tail eating has become more popular because of its price, and because peasant food is more flavoursome and approachable than posh food. “We can thank the recession for that. We caught on that we can have as much fun munching on pigs trotters as we do munching caviar.”

Caroline McCann of Eat In DStv Food Network Produce Award-winning Braeside Butchery also noticed this trend when the credit crunch hit SA. “It’s interesting that as chefs have embraced it, so have the consumers. Chefs know how to take cuts and make them sexy.”

Chefs take the lead
It makes sense that professionals have spearheaded the movement. “If the consumer eats something weird that has been prepped and cooked for them, chances are they’ll love it. And when they realise these things aren’t as intimidating as they originally thought, they’ll start cooking them at home,” says Andy.

TV cooking shows like MasterChef SA have also encouraged home cooks to try new things, according to Caroline. “Their imagination has been ignited again. The media is helping a lot, and chefs are helping too.”

The restaurant started to serve some more unusual titbits last year, but much more so since January when their tapas bar, The Grazing Room, opened. Here executive chef Marthinus Fereirra gets to try things that are a little different and – if they’re popular – place them on the main menu. His short rib with homemade barbeque sauce and corn bread is one of these success stories.

While more extreme dishes like the cock’s comb had rather a short life span on the menu, Joburgers have now warmed to sweetbreads, brisket, shoulder cuts and lamb ribs. Pork cheeks, ears and tails are gaining popularity too. The ears you have to cook for very long time to get them tender, before deep-frying to achieve that heavenly crackling-like crunch.

“If you’re clever as a restaurateur or chef, you try keep these interesting cuts on the menu as long as possible. It’s also a lot cheaper!” Marthinus laughs.

But with some of them you have to work a little harder. “My short-rib and brisket are cured for 24 hours, cold-smoked for four hours and then cooked sous-vide for 24 hours. After this, I pan-fry for colour. The result is beautifully soft and tender meat.”

Short-rib is a hit with Caroline too. “You simply can’t beat it. It offers the best of all worlds – there’s soft, tender meat; enough fat to make it juicy; and the bones release their flavour into the meat. With decent quality, you don’t need to add anything fancy. Just some Kalahari salt and ground pepper and you’re licking your fingers.”

Taking chances
But how adventurous are consumers? Bertus has a robust approach. “Just put it on the menu! We have taken a lot of chances on ingredients like chicken hearts and, I tell you what, the gamble was worth it. Both my guests and I learned a lot in the process.”

One of the fallacies is that you have to be a talented chef to cook these cuts. “Which is bullshit, of course,” according to Andy. “A lot of them are perfect for just chucking in some dark beer and braising for a few hours. Or as an alternative to a Sunday roast.”

But engaging with customers is important. Caroline asks the customers at her butchery what they’re planning, hoping to be able to offer them an alternative – and often more affordable – cut to satisfy their needs. “Personal interaction is critical, and this is where supermarkets fall flat. There are no blockmen on hand to help guide you in what you could be buying.”

Eating ethically
At Braeside Butchery, Caroline’s philosophy to use as much of an animal as possible is a direct result of relationship with farmers. “I can’t get on the phone and order 100 beef fillets. You don’t grow fillets; you grow cows,” she quips. Therefore, in her efforts to sustain her suppliers and their ethical farming methods, Caroline has come up with ways to sell the more interesting cuts.

This acknowledgement of origin is vital to ethical meat-eating, which in turn supports the nose-to-tail philosophy. And if you keep this connection, says Andy, you’ll appreciate your food more.

“Meat becomes a treat and you eat less of it. It’s ironic, but we want people to eat less meat. Just eat the right kind of meat,” he concludes.