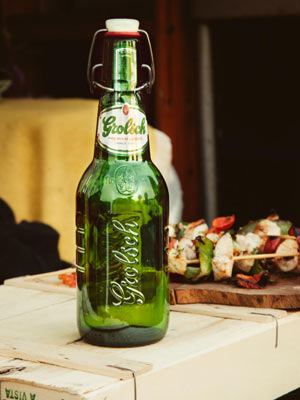 The Grolsch story began nearly 400 years ago, when a young brewer called Peter Cuyper wanted to marry the daughter of the Founder of the Guilds. Peter was challenged to create the best brew, and bucking the trend, used two varieties of hops instead of one. The unique, distinctive brew won him his sweetheart’s hand in marriage and was the first to be awarded the Dutch Royal Seal of Approval. The Grolsch brand continues to innovate within the business, but strives always to remain true to the original elements that made it unique in the first place. It was the only beer to not eliminate the swingtop bottle when the economy prompted other brewers to change to a bottle cap. The two hops varieties, Hercules and Magnum, are still used to give the beer its distinctive taste today and the water used in the Netherlands brewery still comes from the original water source. In fact a 7km pipeline was built along with the new brewery to ensure this. The new brewery was built to be more environmentally friendly, and recycles almost 99% of all waste, putting it in the top ten of the most environmentally friendly breweries in the world. Grolsch is for the individual who chooses to see the world a little differently. Make the bold choice. Choose interesting.