These cafés and eateries around the sunny city have kept your bank balance in mind while crafting their awesome breakfasts.

Kick your day off here with good-deal options like the eggs Benedict for R65; the Quick ’n Easy breakfast with an egg, bacon, grilled tomato and toast for R39; or the flapjacks with maple syrup and bacon for R55.

For a cheap and cheerful brekkie, head to one of the many Afro’s Chicken branches for a good old bacon roll for only R30. If you want to amp it up, order the bacon and egg roll for R35 or the bacon, scrambled eggs and chilli chutney wrap also for R35. If you’re really hungry, there’s also the Regmaaker with eggs, streaky bacon, chicken strips, tjips, livers, and a toasted roll for R59. 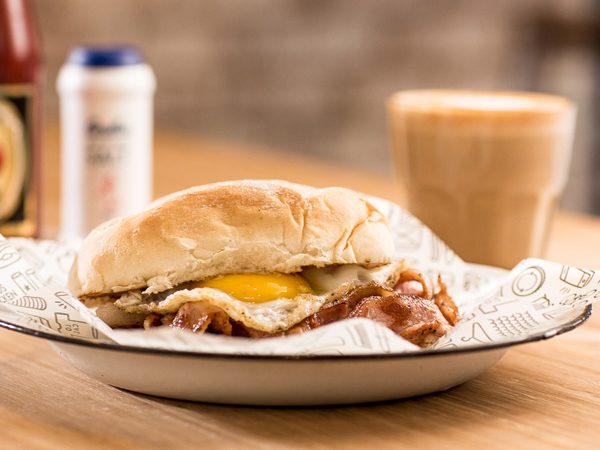 A bacon and egg roll from Afro’s Chicken. Photo supplied.

Grab a spot on the sand at this popular beach café for a hearty morning feast. Enjoy creamy scrambled eggs on low GI or village bread for R40. Or order the One Egg Act where you get bacon, grilled tomato, toast and one fried egg for R40. You could also enjoy a bowl of low-GI oats with honey, toasted almonds and seasonal fruit for R49.

This bright and breezy spot in Sunningdale offers locals good, wholesome brekkies at a great price. Try the apple parfait with yoghurt, honey and raw oats for R47; crumpet stacks with Nutella and banana for R45; two eggs on toast for R27; or avo and eggs on toast for R41.

Most of the breakfasts at this daytime eatery won’t blow your budget. Try one of the three Benedicts with bacon (R77) or spinach (R69), which includes two eggs, toast and hollandaise sauce. There’s also a mini-Moto breakfast with one egg, bacon and toast for R35; the Daybreak-Brekkie with two eggs, bacon and cherry tomatoes for R55; or mince on toast with a poached egg for R55.

This health café serves up some wholesome grub that won’t break the bank. Try the bacon, egg and cheddar on toasted ciabatta for R45; avo, egg and sumac toast for R37; or some oat flapjacks with blueberries for R45. For something extra healthy, order the açai dark chocolate smoothie bowl for R55.

This burger bar isn’t only good for its buns. Head here for one of their breakfasts, like the affordable loaded toast with smashed avo and basil pesto for just R50; or livers on toast with a poached egg for R45. If you’re after something sweet, the Plain Jane French toast with cinnamon sugar and syrup will hit the spot for R40. There’s also the build-a-breakfast option that lets you create a brekkie to suit your budget (and taste buds!).

Not sure what to eat, then just design your own breakfast!!! ? @gerritvanzyl

A post shared by RepubliK Restaurants (@republikrestaurants) on Apr 3, 2019 at 12:53am PDT

Have we missed your favourite spot for a bargain breakfast? Let us know in the comments below. Plus, remember to review your favourite brekkie spot using our free app.