Discovering Durban’s new grillhouse (with the best chips ever)

The beachfront in Durban brings back memories of summer holidays spent on the veranda at The Beach Hotel, having rickshaw rides, and celebrating New Year’s Eve on the promenade.

This week I discovered a great new place to make memories: The Grill Jichana at Southern Sun Elangeni & Maharani Hotel. The executive chef for the hotel is the very passionate Shaun Munro who, together with his team, launched the concept. It’s modern and stylish, and you can watch the grillers prepare your meat. But don’t worry, there’s also duck and seafood – and I eyed a really good-looking and oozing halloumi stack on the pass.

Shaun’s enthusiasm is infectious; we spoke for ages about the restaurant dining scene in Durban and his love affair with simplicity and sourcing the best local products. 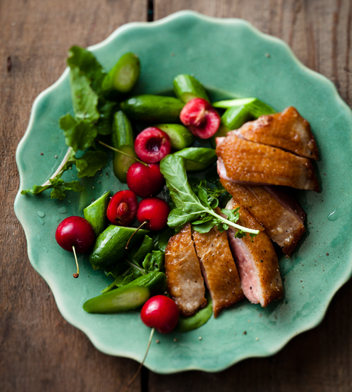 Last week I spent two full days judging the best produce around the country (the winners of which will be showcased at the Eat Out Zonnebloem Produce Awards in Stellenbosch on 12 April). On Shaun’s menu I was delighted and impressed to see quite a few of the nominees making an appearance. One was Dargle Ducks, the happiest ducks around, which are raised at Dean de Chazal’s farm in Howick. The breasts are plump and sweet, probably because the birds waddle happily in mud and forage for earthworms, rye and radishes.

I also recognised a wheel of sage-and-beetroot cheese made by Chrissie Briscoe in Richmond and I had a fantastic piece of waygu beef from Woodview Farm in the Free State. The meat is superb: it’s cooked to perfection (not even really needing the café de Paris butter that I absolutely love) and served with some of the best chips I’ve ever tasted. Honestly, we’re talking about potato heaven here. Shaun has managed to source very large potatoes that he blanches and then fries twice, creating these oversized numbers that are soft and mashy inside with the ultimate crispy crust. They went quite nicely with a sauceboat of thick, luxurious béarnaise, another favourite of mine.

It was great to see locals flocking in and supporting this quite new grillhouse, which I’m sure will turn out to be very successful. Meanwhile, I’m still thinking about that hand-cut beef burger that I saw on a table on my way out…