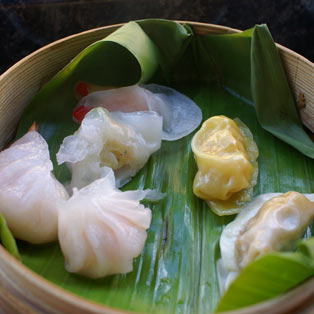 “No, you’re folding it wrong,” Xiao Tie Ning told me, poking me in the ribs with a set of chopsticks, so that I completely squashed the little dumpling I was trying to fold. It was Chinese New Year and, though we were in small-town England, there was a carnival atmosphere in our little kitchen. There was a steady drumming sound coming from six cleavers slicing spring onions, potatoes, pork and chicken on six chopping boards, while bubbly Chinese pop music blasted from our television, tuned to the Chinese channel.

As the neighbours came to complain about the chopping noise, I watched my diminutive Chinese flatmate expertly fold the paper-thin rice skins around the vinegary mince, until they formed a neat little parcel. “See?” she asked. I nodded, I did see, though I didn’t have the faintest idea of how to replicate the feat.

Originally intended as a snack to accompany tea, the small steamed dumplings, baked rolls or other finger foods that comprise dim sum are now served as standard fare for breakfast and afternoon meals in Hong Kong and China. In South African restaurants, dim sum is popping up on more and more dinner menus. At Haiku, Chinese chef  Wendy Liang says that spinach dumplings are among the most popular of her dim sum. Along with other, more traditional options, Beluga put a local twist on its dim sum, serving dumplings with fillings such as spinach and cream cheese, salmon and cream cheese, and chicken and peppadew.

Whether you’re a devoted wonton fan, thousand-layer-cake enthusiast or just curious about the trend, try out one of these great local restaurants that serve dim sum.