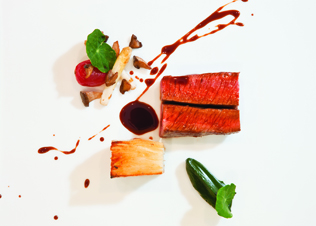 David Higgs has returned to the kitchen as executive chef of The Saxon Hotel, opening his new signature restaurant, Five Hundred, two weeks ago.

After a disappointing stint at the Radisson Blu Gautrain Hotel’s Central One, where his food never quite made up for terrible service and the labyrinthine elevator system, Higgs has clearly decided to return to the finest of dining.

There are certainly parallels between the Rust en Vrede winelands experience – which made Higgs a household name in the South African gourmet world – and the urban elegance of this new Sandton venture: attention to detail; a formidable trio of chef, sommelier and maître d’hôtel; and a flamboyant landlord. This is clearly a team effort. Higgs does his magic in the kitchen, in full view of all the guests seated in the dining room. Francis Krone keeps the wines flowing from his Aladdin’s cave of a cellar, and William Riffel oversees the superb service, which is impeccably discreet, yet relaxed.

We were greeted with an artwork in the arrangement of flavoured oils and butters on our table, which was only to be destroyed with chunks of freshly baked bread. From the opening salvo of an array of preserved fish with a deliciously frozen oyster macaroon through to the poached nectarine dessert, each dish was a micro feast. The second course of crayfish sausage with accompaniments such as corn and pumpkin beautifully evoked Cape Malay flavours. It was my favourite. (I think.)

Another definite highlight was the foie gras, porcini and white chocolate mousse topped with pureéd pear. The pork neck, cooked sous-vide for 72 hours at exactly 61 degrees, was still being discussed wistfully the next morning, and after-dinner coffee was served with a fragrant love letter of Turkish delight.

Higgs believes that a restaurant’s relationship with its guests is key to its success. When we complimented the sommelier on his pairing of the Ashbourne Sandstone 2007 with the pungent, yet airily light, blue cheese samoosa, we were told that he and Higgs had decided to stray from their usual pairing as they wanted to surprise us with something we wouldn’t have tasted before. Their assumption that we were familiar with the intended wine was indeed correct and we felt like royalty.

The restaurant is named after the number of the presidential suite occupied previously by the hotel’s owner, which now houses Five Hundred. The dining area was the lounge and study, while the kitchen is in place of the bathroom. The Ruinart Room, which is available for private dining for up to eight guests, is situated between the kitchen and the wine cellar in what used to be the bedroom. All tables have a wonderful view of the kitchen, as well as a twinkling of Sandton lights.

There are three options on the menu: four courses at R695, six courses at R925 or six courses with a wine pairing at R1550 – not for the faint-hearted. But for those looking for a world-class experience, where memories count for more than money, this is the kind of evening that will ensure that any occasion is thoroughly celebrated.

We were invited to linger after rounding off our six courses with an espresso, but we had to concede defeat. We were sent on our way with a slice of honeycomb for our breakfast toast (who could even consider breakfast in the aftermath of such a meal?) and, finally, we were given a copy of the menu, signed by Higgs and Krone, who added the wines we were served next to each course. This is not only a memento of a momentous evening, but a reminder not to stay away too long, or we may miss something we’d rather not.

Have you been? Review Five Hundred here.