Reigning S.Pellegrino & Acqua Panna Chef of the Year Gregory Czarnecki, head chef at The Restaurant at Waterkloof in Somerset West, recently spent four nights at the top of the world.

Along with 29 other chefs from around the globe, award-winning food writers, wine producers and VIP guests, Gregory was participating in Care’s The Ethical Chef Days at the Rosa Alpina Hotel & Spa at Alta Badia ski resort, nestled amongst the snow-capped Dolomite Mountains in Italy. The project, now in its second year, promotes an ethical and sustainable approach to cooking.

From 22 to 25 January 2017, speakers from the realms of science, economics, enterprise, medicine, cuisine and architecture expanded on innovative ideas about food, while the top chefs cooked in shifts to keep the hundreds of attendees fed in a series of elaborate meals. (There was also skiing, partying until the wee hours, and champagne breakfasts at sunrise.)

As part of his prize for winning SA’s top culinary honour at the Eat Out Mercedes-Benz Restaurant Awards in November 2016, Gregory had the opportunity to participate, thanks to S.Pellegrino & Acqua Panna, one of the sponsors of the Ethical Chefs Days event.

Feeding the contingent of 400+ attendees in different parts of the five-star hotel was no mean feat for the chefs – especially when their station might be a trestle table in a corridor or a firepit on top of the slopes in minus-12°C weather. (The lamb went up in the ski lift, along with plates and glasses from the hotel – not to mention the sommelier.) The reward was getting to work with whatever produce their hearts desired – like knuckle-sized truffles, cheeses, beautiful fish and meat – even bear.

For the black-tie gala dinner on Tuesday 24 January, Gregory prepared a canapé of duck-liver parfait (from a local Italian farm known for its birds) with hibiscus (one of his trademark flavours) jelly and coulis, saffron, and gingerbread discs. Producing almost 500 of the perfectly round discs was deemed “a pain in the ass” after the fact, but we know by now that Gregory never does anything by half measures. “There were so many other chefs, with different styles and executions, but the feedback on my dish was good. I’m quite minimalist but adventurous in terms of flavour, so people were excited by that. And they must have liked it, because they let me cook the next day!”

Gregory’s final dish was for a sort of travelling supper on the last day of the conference. There were about four or five chefs per station, which were dotted around the resort. Gregory prepared a dish of crispy langoustine with curry emulsion – Cape Malay spices smuggled in from back home, of course – and gingerbeer compressed apples. 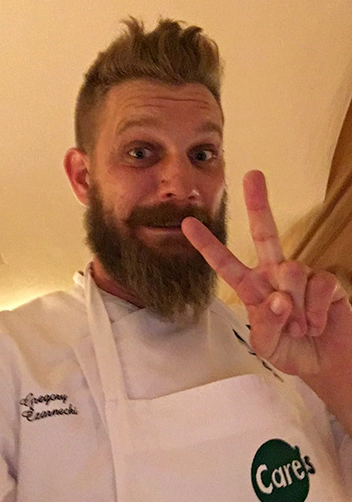 Living in the moment was a challenge, says the chef. “You want to interact, speak to people, exchange ideas, not just keep your head down the whole night, because there are 250 people coming through to taste your dish.

“But to work alongside Vladimir Mukhin [chef at White Rabbit in Moscow] and Francesco Mazzei [chef at Sartoria in London], some of the world’s best female chefs… To have Rodolfo Guzman [chef at Boragó in Chile] coming to taste your food, it was an honour and a great pleasure.”

Unwilling to commit to a single best dish from the rota of world-class talent, Gregory says he was struck most by the simplicity of flavour of one plate by chef Norbert Niederkofler, one of the founders of Care’s Ethical Chefs Days and executive chef at the Rosa Alpina. The egg served with radish was simple but beautiful.

Yet all the meals were excellent: “I got so inspired, even by the simple pastas. I mean, you’re eating it in Italy, cooked by one of the locals…” (One night, during the after-party, Greg was amazed to be dragged off to the lounge at 2am by one of the chefs for some penne with tomato sauce that he’d just thrown together for his fellow revellers.)

“Everyone made you feel like part of the family, always with a big smile on their face. I have come back really inspired; it was having a whole library in front of me for every meal, with new approaches and executions.”

Gregory was particularly impressed by chef Norbert’s sustainable way of thinking about food. He uses only ingredients from the mountain, which originate from the area above a certain altitude, including herbs, root veg and livestock. “It takes real commitment and hard work to deliver under these circumstances. I really admire that.”

Advice for next year’s chef of the year? “Just embrace the experience; it’s going to blow your mind. Take it in and appreciate it every minute.”

For more on the event, including chefs and programme, click here.

Read about 2015 Chef of the Year Scot Kirton’s experience at the event last year in Italy.