A (rising) star is born: An interview with Grei’s Candice Philip 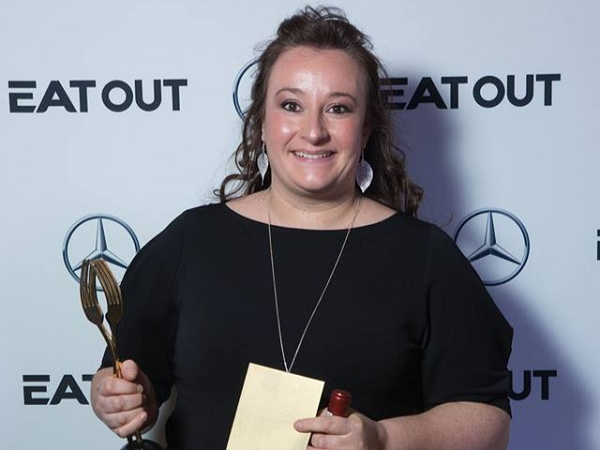 From her kitchen at the Saxon Hotel in Johannesburg, Grei’s chef Candice Philip has humbly yet confidently been carving out her culinary journey. In November 2018, Candice was named the Eat Out Nederburg Rising Star, an award that recognises a chef who has a notably emerging presence in the industry. In a world where the culinary chiefs often have rather expressive personalities, Candice brings a breath of fresh air with her calming demeanour. Make no mistake, though, this doesn’t lessen the determination needed to run the show. Although she admits to being shy, there’s no doubt that she’s the commander of her kitchen.

Grei is an elegant and unintimidating space set on the second storey of the Saxon Hotel. Subtle grey shades complement the sophisticated hotel without detracting from its beauty. Luscious garden views give way to sunset in the intimate setting of the 32-seater eatery. The dining experience is a refined journey through creative taste profiles, matched with faultless service. Devoid of any excessive theatrics, the food is given the chance to breathe and speak for itself.

Tell us a little about your journey?

In school, the initial plan was to become an interior designer. At some point I met our neighbour, who was none other than chef Manfred Reinhart, who was looking for an apprentice. I’d never thought of cheffing but he offered me a trial to join him at the kitchen. It was a chance to see what it was all about before starting interior design. The month finished and he sent me off to decide what I wanted to do. I really enjoyed it and decided to give it a go, starting the four-year apprenticeship through Gallagher Estate and HTA School of Culinary Art. After a short break I started at the Saxon [Hotel] as a junior, worked my way up and now I have my own restaurant.

What were some of the highlights of the journey?

The competitions have definitely been a stretch – and never something I thought I’d do. It was actually chef Rudi Liebenberg who pushed me to enter. I’ve now done many of them, and was also invited to the SA National Culinary Team and landed up being part of the 2008 Olympic team. I represented Africa & Middle East at the Global Chef’s Challenge. Working with both chefs David [Higgs] and Luke [Dale-Roberts] has also been quite an experience.

It was great! As he was coming from Cape Town, we didn’t really know much about him, and he came in making some important changes, including opening the restaurant Five Hundred. This was the first time we had been introduced to Eat Out and such a fine dining context, and coming second in the first year of operation was a whirlwind and an eye-opener.

[As he wasn’t] based in Joburg, we didn’t work with him as much as we did with chef David. When he was here, it was a totally different style and viewpoint on cuisine than what we’d been exposed to before, so a different and new learning curve.

Tell us about the build-up to the launch of Grei?

After closing Luke Dale Roberts X The Saxon, we were based in the on-site villas while we worked out the menus and the design of the new space. We were actually very calm the whole way through – although you always feel a little anxiety as to how people will receive the restaurant in what was previously a well-known space. Opening evening was quite something. My nerves were fine until 5pm… we were changing the décor, style of service, and many of the front-of-house team, so even though we were ready in the kitchen, the end product depended on everything working together. It was a little hairy, but we got through it, and it was plain sailing from the second day. The year has flown by; I honestly can’t believe that we’ve been open for 8 months already. It’s been so well received and I honestly couldn’t have asked for a better reception.

We were only five months old when we got the nomination for the World’s Leading Fine Dining Hotel Restaurant 2018 by the World Travel Awards. It seems so strange that people overseas would know about our tiny little restaurant and would nominate us.

Most recently, the Nederburg Rising Star award at the Eat Out Mercedes-Benz Restaurant Awards – it was so unexpected! I went to Eat Out to support everyone else – I wasn’t expecting anything, really. They called my name, and I was fine walking up… but I’m not one for doing speeches and dealing with crowds, so I got up there and was told I needed to say something. It was very overwhelming. You get up there and look at over 700 people staring at you and you’re like “How did this just happen?”. I think I managed a “Thank you”.

Your garden seems to play a big role in your cooking…

In 2012 we brought in Sought After Seedlings, whom we sit with each season to work out what to plant – including some rather unique herbs. We’ve got sculpit, malva, rose geranium, lovage (similar to celery), spekboom and more. We wanted to go for a different take on cuisine. I love trying things that are unusual.

What advice would you give to up-and-coming female chefs?

There is space and room for you in the industry. Don’t enter the industry worried about gender – at the end of the day you are showcasing what you can do, your vision, and if you can put that on the plate and people recognise it then that’s all that you really need. As long as you’re doing what you’re doing and don’t feel like you’re the lesser sex.

What’s the legacy you want to leave for other rising stars that follow you?

Don’t be afraid to be different – to showcase what you really believe in and want people to see. There are so many people who are doing what people expect. Be that person who has a crazy wild vision about what you want to do and just do it – and it doesn’t matter how long it takes.

Your favourite spot for a coffee?  Bean There at 44 Stanley.

Where do you go to let off steam? Harties and Magaliesburg.

Want to know who else won at the 2018 Eat Out Mercedes-Benz Awards? View all the winners here.