Cast your mind back to 70s cuisine and you’ll picture avocado Ritz, devilled eggs, don pedros and steak garnished with frilly parsley and a row of pink prawns. This last dish, playfully called ‘surf and turf’ (or ‘beef and reef’) in tribute to its elements from both the sea and the land, has a somewhat chequered history.

To keep up with the Joneses, the middle classes of 1960s and 1970s America served lobster tail with their steak, hoping to make the delicacy go further but still retain the perception of its “rarity and status”, according to historian George H. Lewis. 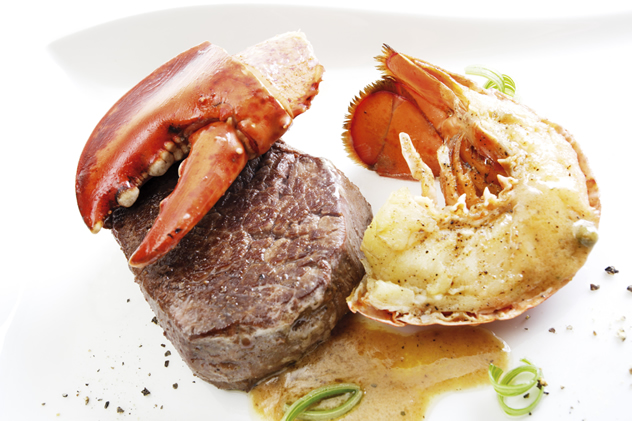 After a few decades of showing off on dining room tables, the beef and seafood combo was given an ironic resurrection by American chef Thomas Keller (whose most meaningful contribution to the world is arguably his work as food consultant on the film Ratatouille). Appearing in The French Laundry Cookbook (1999), his incarnation of surf and turf couldn’t be farther from its middle-brow predecessor, calling for braised oxtail, seared monkfish, sautéed salsify and cèpe mushrooms.

But what about South Africa in 2015? Has surf and turf gone from passé back to prime – or simply stayed put? Our first stop in answering this question has to be the bastion of South African food, Spur. Old faithful. Where retro dishes like crumbed mushrooms can live on indefinitely – or can they?

Elvis has left the building

You may be shocked to hear that surf and turf (steak and calamari, in this case) is no longer served at Spur. The chain’s head of marketing, Etienne Ralphs, says the dish had remained on their menu “more as a sentimental favourite than a product that actually sells.” But, due to menu engineering and efforts to simplify the menu, Spur has removed products that fell “below a sales mix minimum percentage value”. He says modern consumers, especially the emerging market, far prefer meals on the bone, and the rib-based combos are more popular. 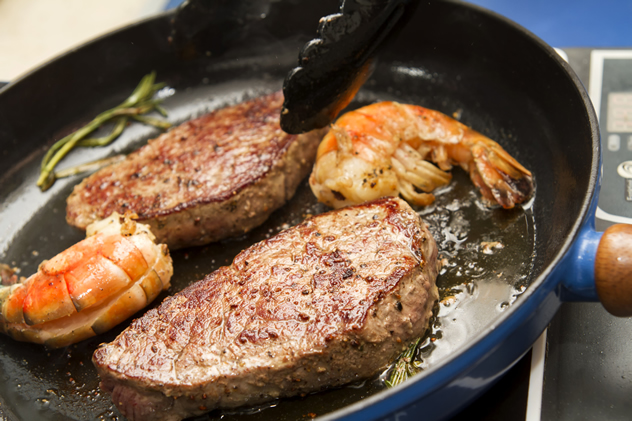 Harsh words indeed, but surely this can’t be the death knell for surf and turf? We go deeper into dedicated steakhouse territory to find out more.

Love me tender, love me true

The Hussar Grill in Rondebosch serves a more unusual take on beef and reef in their Carpetbagger steak, a fillet mignon stuffed with smoked oysters and cheddar cheese and topped with a brandy and wholegrain mustard sauce. (R169 for 200g and R189 for 300g). Manager Marianne McDonald allays our fears: “We’d never take it off the menu. It’s very, very popular. It sounds like an odd combination; it’s insanely rich but amazingly tasty.” The restaurant’s special of sirloin with chilli-garlic prawns was also a success last year, says Marianne.

Dedicated surf and turf fans in Jozi can head to Turn ‘n Tender in Illovo for mini tender steaks with calamari tubes or baby squid heads (R128) or beef spare ribs and calamari tubes or baby squid heads (R142). Owner Brian Aaron looked at orders for the last month or so, and says that his surf and turf combos do reasonably well without them pushing it. “And there’s also the fresh mussel topping on top the steak – that’s always been one of our specials. We’ve done it since day one [they opened 38 years ago in 1977].” 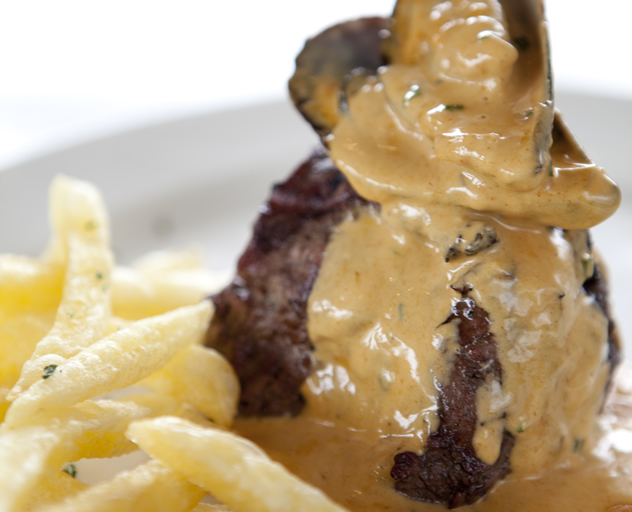 While not on the usual menu at seaside favourite Brass Bell on the Southern Peninsula, the combo is one of their current winter specials: 150g sirloin and 150g calamari plus a starch, with a bowl of soup and glass of wine or Hunter’s Dry for R95. Another steak spot happy to deviate from the menu for this old favourite is Chaplin’s Grill in Hurlingham, Johannesburg. Owner Rainold Petersen says, “If you want a steak with prawns on it – we can make it.”

While these eateries have certainly proven its enduring popularity (take that, Spur!), surf and turf is not the sole preserve of pub grub. Fine dining restaurant SeaFood at the Marine in Hermanus serves its own take, with chargrilled beef sirloin, pan-seared prawns, rosemary-dusted fries and red wine velouté (R195). Executive chef Chad Blows says this dish is the best of both worlds. “If you go out for dinner and you can’t decide between having seafood or meat, this is a great option.”

So, it’s clear that beef and reef is still alive and kicking. But who’s making it happen? Is it just older diners who fell in love with it in the 70s and can’t let go?

Marianne from Hussar in Rondebosch says definitely not. “There’s a huge range demographically. I’ve never seen a teenager order it, but anyone from their 20s to… old,” she laughs. “Predominantly men, but women order it too. It’s surprising because you’d think it’s an old-school sort of dish, but it has wide appeal.” 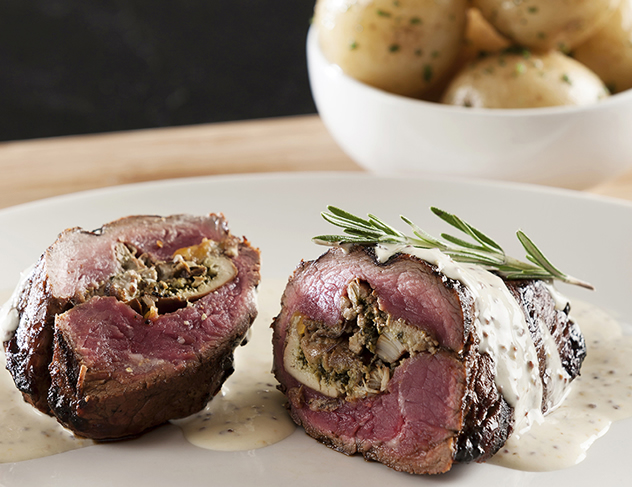 Chad at The Marine agrees: “We can’t pinpoint a specific stereotype – everybody loves it. It’s marginally more popular with the menfolk, though.”

For Ryan of Butcher Boys, surf and turf is not nostalgic at all. “We’re fairly new to it – it was only added to the menu about two years ago. Maybe we swim against the stream?” he quips.

With the basics firmly in place – clearly the grilled steak and seafood combination works – maybe it’s time to take surf and turf into new trendy territory. How about using different beef cuts and unusual shellfish? Blending it into an artisanal ice cream? Putting it on a pizza, in a risotto, under a brioche roll?

On second thought: no, no, and no. Surf and turf works because it’s simple. It may have started out as dinner-table swagger, but these days it’s comfortable with itself. It’s not the cool kid on the block, but it’s not pretending to be anything else either. And maybe, because of that, it’s here to stay.