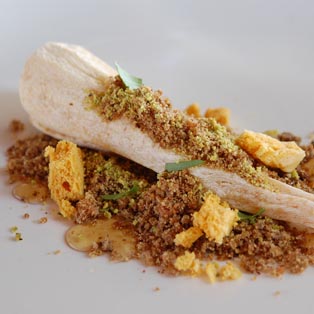 Foodies the world over are eagerly awaiting the announcement of this year’s San Pellegrino World’s 50 Best Restaurants, which will be announced on the 18 April.

René Redzepi, chef at the helm of last year’s winning restaurant, Noma, bumped Copenhagen to the top of the list of inspiring and innovative restaurant capitals, and has made Scandinavian cuisine very much du jour.

This is but one international food trend that has manifested recently. Here is Eat Out’s round-up of other culinary crazes taking the globe by storm.

Vegetable dishes are very much in the spotlight at the moment, thanks in great part to the advent of meat-free Mondays. Rust en Vrede chef David Higgs has turned the humble vegetable into an art form. ‘I believe that you should be able to take away the protein component of any meal and still be left with a composed dish with interesting textures and flavours,’ he says. ‘One such dish on our current menu is pan-fried springbok served with puréed, roasted and raw cauliflower, tamarind gel, shiitake mushrooms and white beans. If you take away the meat, you’re left with a perfectly balanced vegetarian dish.’ Asked which trends are exciting him at the moment, he replies, ‘I’ve literally just come back from London where I visited at least six restaurants that all incorporated seaweed into their menu in one form or another, whether it was braised, puréed or pickled. That’s definitely something to look out for locally.’

Staking off a piece of land and growing your own fruit and veg is one way to decrease your carbon footprint in an increasingly urban environment. Both individuals and restaurants are sowing the seeds of self-sufficiency, paying special attention to the cultivation of heirloom varieties. One local restaurant partaking in this trend is Pierneef à La Motte. Chef Chris Erasmus says that, although the restaurant’s not completely self-sustaining yet, it’s getting there slowly but surely. ‘All the things I need on a day-to-day basis, such as pumpkin, beetroot, squash and herbs, I get from my veggie garden, which is completely organic,’ he explains. ‘We have an amazing gardener in Jaco Visser, who I consult with at the turn of each season, so we can plan what to plant.’ Other eateries heavily relying on their on-site veggie gardens include Mariana’s and Jordan Restaurant.

Also known as temporary supper clubs, pop-up eateries defy most rules regarding conventional restaurant dining. There’s no set address, with venues –be they in a house or disused factory – most often kept secret until the last moment; and they’re transient, frequently opening for one night only. Arnold Tanzer, chef and former Eat Out Award judge, says the concept behind his new pop-up initiative Eat, is to ‘create memorable gastronomic and social flashes that exist for a moment and then vanish’. He continues, saying that his culinary evenings are ‘set up like magnificent dinner parties, where guests are encouraged to interact and share their passions’. These clandestine banquets are set to take place all over Johannesburg at five-week intervals, and have featured delights such as line fish with cauliflower, atchar and caramelised pineapple, and lamb shoulder with smoor beans and jus.

Pioneered in America and England, stern efforts have been made to curtail kids’ access to unhealthy food and drinks. This trend is spilling over to South Africa, as can be witnessed in some local supermarkets offering dedicated shelf space to balanced nutritious meals in small portions that are specifically aimed at children.

As Eat Out editor Abigail Donnelly predicted at the 2010 Eat Out Awards, foraging is one of the hugest trends at the moment, with chefs turning to their immediate environments for their ingredients. Kobus van der Merwe, chef at Oep ve Koep in Paternoster religiously scours his surrounds for seasonal findings to incorporate into his menu. ‘During summer I use sea lettuce in salads and in winter I pick veldkool (field cabbage) and incorporate it into bredies,’ he says. ‘Dune spinach is one of the few West Coast plants you can get year round, and I usually wilt it in olive oil to use in salads. Another favourite is soutslaai (salty lettuce), which I use to substitute the saltiness of capers in certain dishes.’

Chefs are being inspired by natural elements and going to great lengths to recreate their culinary doppelgängers. ‘I think just about every chef on the planet is busy making some kind of soil or another,’ jokes The Roundhouse executive chef Eric Bulpitt, who did a stint alongside René Redzepi at Noma. ‘It’s all about creating texture on the plate. Something that’s also quite popular at the moment is the recreation of snow, which is done by freezing and blending certain ingredients. Some chefs are also making parfaits and freezing them with liquid nitrogen to make spheres that look like rocks.’ Eric concludes by saying that smoke is another trend that shouldn’t be ignored. He illustrated this fad during the 2010 Eat Out Awards with his smoked pear ice cream.

According to Abigail Donnelly, the foodie phenomenon of fossilisation, which can be witnessed at Richard Carstens’ Tokara, is a trend to watch out for. ‘Richard paints root vegetables, such as parsnips, with calcium and then slowly roasts them in the oven until they resemble fossilised bones,’ Abigail explains. ‘When you bite into them, you’re hit with an intense parsnip flavour.’ Making use of another trend, Richard serves his ‘fossil’ on porcini ‘soil’.

Eateries are increasingly putting their focus on one dish or ingredient, and building upon it. Internationally, these foodstuffs include cupcakes, hotdogs and even peanut butter. Locally, Giorgio Nava pays homage to the creamy, stringy Italian cheese at his Mozzarella Bar and casts the humble pie into the spotlight at Down South Pie Bar.

Abigail Donnelly says that she is very much looking forward to witnessing the evolution of fun dining during the Eat Out Awards judging period this year. ‘We’re past the stage of starched white linens and formal plating,’ she explains. ‘Diners want to have more fun when eating out and restaurants are responding to this. Things are loosening up with regard to table setting and the arrangement of food on plates. This isn’t merely happening at informal bistros, but also fine-dining establishments.’