Topsi Venter, one of the Cape’s heritage heroes, passes away 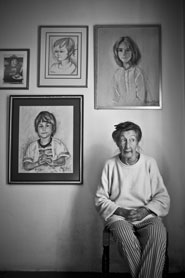 Tributes from some of South Africa’s top chefs came in this week, as news broke that chef Topsi Venter had passed away on Sunday. She was 85.

The Bloemfontein-born chef found fame hosting dinner parties for artists and entertainers at her Joburg home. She worked for the Dried Fruit Control Board for 20 years before moving to the Cape, where she opened several restaurants, including Hatfield House and The Wild Fig, before taking over the kitchen at Roggeland Country House in Paarl. After a short sabbatical, she later opened Topsi & Co in Paarl with her daughter Danielle. Her cookbook, Fooding about with Topsi, illustrated by Beezy Bailey, is now a collector’s piece.

Topsi was known as a champion of South African flavours and ingredients. In an interview with Leigh Robertson in 2010, Topsi attributed her cooking skills to her mother, and said the highlight of her career was cooking for elBulli chef Ferran Adria. “His Catalan heart understood my South African heart,” she said.

“I remember hearing about Topsi when I first started my career,” said Eat Out editor Abigail Donnelly. “She was cooking at Roggeland at the time, and I always dreamt of going there. She really cooked for simplicity and she celebrated South African dishes. One of my stand-out memories was her Cape Malay curried mussels. She was the real doyenne of Cape winelands food.”

In addition to her cooking talents, Topsi was also a mentor to many in the restaurant community – particularly to one chef, Tokara’s Richard Carstens.

“I met Topsi during my time at Chamonix in the early nineties when she was still involved at the Roggeland in Paarl. In the years that followed she was a mentor and mother figure to me and taught me the true essence of South African and the real meaning of terroir cooking. She grounded my ideas and gave me valuable advice as a young chef, which I still cherish today. She was a true Bohemian, loved animals, art, literature and I’ll miss the many conversations we had and the knowledge and life lessons she shared. In true Topsi style she made my wedding in 2007 the most memorable and happiest day of my life.”

“Topsi arrived in Franschhoek and opened Topsi & Co soon after I arrived at Le Quartier Français. If she had had the ability, she would have thrown a huge party to say farewell. Her restaurant was way more than just a place for eating and drinking. Many gatherings took place there, between walls filled with paintings and meters of books, together with Pannavis the parrot, Brulée the dog (the only square dog I have ever known) and all the other animals that were part of her life.

“Topsi was larger than any of us. Her unique approach to everything she did has taught so many of us lessons that reach far beyond anything culinary. Food, art, literature, South Africa… she could educate, talk and laugh for hours, with a glass of wine (or two) and sometimes the occasional nap in between. Topsi is a true legend. I will miss her and celebrate her always.”

A gathering will be held for her loved ones on Friday 29 July in Franschhoek.