To make the cake
Preheat the oven to 180 °C and line two 23 cm cake tins with baking paper.

Sift the flour, cocoa, salt, bicarbonate of soda and baking powder together in a large bowl. Add the castor sugar.

Dissolve the coffee in a little water and add the vanilla.

Beat the eggs and buttermilk together, then beat this mixture into the dry ingredients. Add the melted butter and the coffee mixture and mix well.

Pour the batter into the prepared tins. Bake for about 45 minutes or until done.

Cool on a wire rack before turning the cakes out of the tins.

To make the coffee syrup
Place all the ingredients in a saucepan over medium heat and stir until the sugar has dissolved. Simmer gently for 5 minutes.

To make the Swiss caramel butter icing
Heat the white sugar, caramel sugar and egg white in a double boiler until it reaches 115 °F (46 °C) or until the sugar crystals have dissolved. Test the mixture by rubbing it between your fingers – if you can’t feel the sugar crystals, it is ready.

Pour the hot mixture into the bowl of an electric mixer fitted with the whisk attachment and whisk until stiff and glossy.

Sift the icing sugar and add it to the egg white mixture. Whisk slowly at first to avoid making an icing sugar dust storm, and then whisk quickly until the mixture is very stiff.

Divide the butter into 4 portions and add it in 4 batches with the machine running at full speed. Don’t worry if the mixture becomes sloppy after the second addition, continue whisking and add the remaining two batches. The mixture will eventually thicken and become smooth.

To make the caramel glaze
Sponge the gelatine in the cold water for 5 minutes.

Boil the syrup until golden brown – don’t let it boil too long.

Remove from the heat. Add the butter and cream and whisk until smooth. Be careful that the mixture doesn’t boil over and that the steam doesn’t burn you. Stir in the sponged gelatine. Leave to cool to room temperature before using.

Assembling the cake
Halve the cakes horizontally and trim each layer until even.

Cover the top and sides of the cake with the rest of the caramel butter icing.

Place the cake on its cake board on a wire rack with a baking tray underneath. Cover the whole cake with the cooled caramel glaze. Make sure the glaze has cooled to room temperature before doing this otherwise it will melt the butter icing.

Optional: Decorate the cake with shards of brandy snaps and spun sugar. 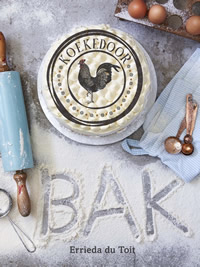