Fabulous feast at The Cousins in Barrack Street

In the fifth installment of his Forked Tongue column, Ami Kapilevich is blown away by the tagliolini at The Cousins in Barrack Street, Cape Town. 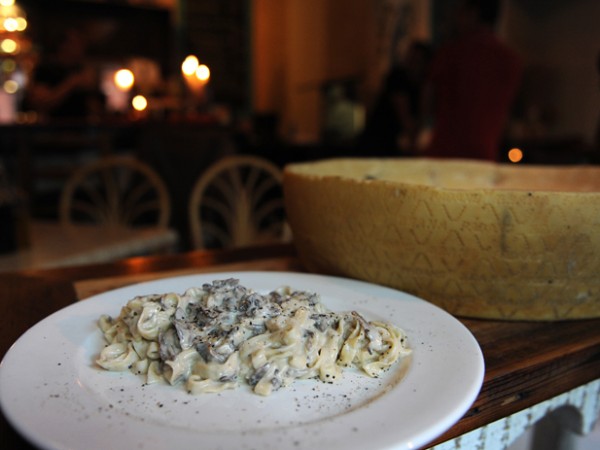 The signature pasta and parmesan at The Cousins. Photo supplied.

“Italian on Barrack Street,” said Ryan’s message. “Looks dodge but food is great.” Which translates as: This hole-in-the-wall is about to trend; let’s get in there before it becomes cool – but we’ll remain absolutely noncommittal about this arrangement until about thirty minutes before we’re actually supposed to meet.

I am able to decipher this code because I have, over time and out of necessity, learned to understand the dialect of the Cape Town hipster. Ryan has a lush beard, drives a white Jeep Wrangler, and routinely spends a thousand ironic rands on foraged cocktails at a place called Outrage of Modesty.

So when he suggested dinner at The Cousins, I knew it would not be an ordinary establishment. And sure enough, the restaurant bills itself as authentically Italian as a thousand-year-old family feud culminating in a loud argument in the street.

The Cousins is suitably difficult to find. It’s in a one-way street in a part of town so central that it virtually doesn’t exist. Like a little bit of downtown Jo’burg in Cape Town.

There’s very little else on the block: A dodgy hotel with a fluorescent lobby, a barber with an actual “Help wanted” sign in the window, a police station, and a deserted building that has been gutted by a fire. 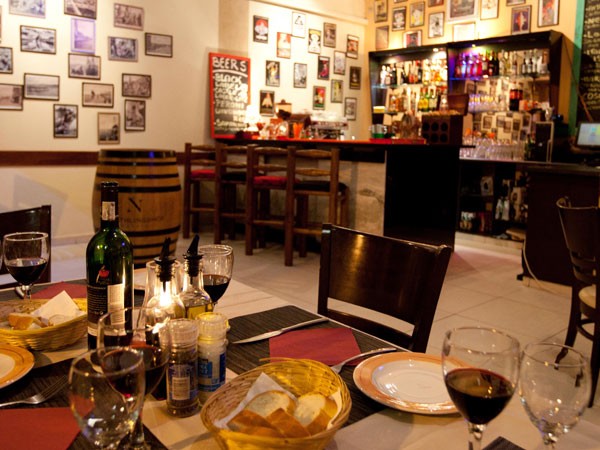 The interior at The Cousins. Photo supplied.

I was the first of our party of six to arrive, so I pretended to read my book at the bar while eavesdropping on the owners, but their Italian accents were so thick that I struggled. A good sign.

I liked the décor – a homely hotchpotch of cheap and ugly furniture – and I liked the fact that the restaurant is divided into two rooms. Restaurants should be cosy.

We scored the best table in the place, a padded bench up against the window, ensconced by a wall on one side and the entranceway on the other. Another plus. So much of one’s dining experience depends on the position of one’s table. I once struggled through a meal at a fancy restaurant in Constantia because the table was in the middle of the room, and thoroughly enjoyed a dinner at the Spur because we got a good booth.

The menu at The Cousins is confidently short. There are six starters: Cold meat or vegetable platters, a soup, burrata (mozzarella filled with cream cheese), crostini, and carpaccio. Mains consist of pastas, meat, and a catch of the day.

We shared a carpaccio, salad, and a crostini mix to start.

As far as I can tell, there are two main schools of carpaccio: Those that cut the meat wafer thin and then give it a gentle rub down, and those who cut it a bit thicker, and beat it like George Foreman.

I prefer the latter, partly because that’s how they made it in the place at which I used to waiter a hundred years ago, so that’s the style I grew to love, and partly because the beating is not just for tenderisation; the resultant flaking allows the raw flesh to absorb the flavours of the oil and lemon juice or whatever your preferred drizzle for the dish may be.

This carpaccio was down-to-earth if a bit uninspired, but I do feel vindicated that they opted for the latter method.

Once I’d managed to pry the platter from Vicky, I established that the crostini were damned fine. The olive tapenade was perfectly pitched, and the melanzane topping was so good that it transported me back to that fateful summer in Plett when my girlfriend’s mom made the best eggplant spread I had ever tasted, with enough garlic to stamp out teenage lust… almost.

Mimi said the salad was good and, while I cannot fathom what would advantage one bowl of lettuce and tomato from another, I believe her. Mimi is a sage.

My wife was delighted to discover that The Cousins serves her favourite Italian dish: Sliced beef on a bed of greens. This has been Michele’s kryptonite since she tasted it at Magica Roma, another authentic Italian gem in Pinelands, so a comparison would not be entirely uncalled for.

Magica Roma’s tagliata fiorentina is made using fillet, while The Cousins version is a sliced T-bone. So at Magica Roma you’re getting the tender bits, while at The Cousins you’re getting the strips of fat on those pieces cut from the sirloin part. I preferred the sirloin version; Michele did not. But there’s also something about the green base at Magica Roma, I think, that elevates it above that of The Cousins. Mimi’s husband Brendan didn’t touch a single leaf on his plate, which is not like him.

I ordered the strozzapreti bolognese because I had never tasted strozzapretti before, and because the menu informs you that strozzapreti means ‘strangled priest’. It’s a pasta made without egg yolk, so the finger-length tubes are fluffy and absorbent, with a grainier texture than normal pasta. The bolognese sauce was alchemically good: Rich and heady and mysterious.

The restaurant’s signature dish is simply called The Cousins pasta, a creamy mushroom tagliolini that is ostentatiously whirled in an enormous wheel of concave Grana Padano cheese before being plated. 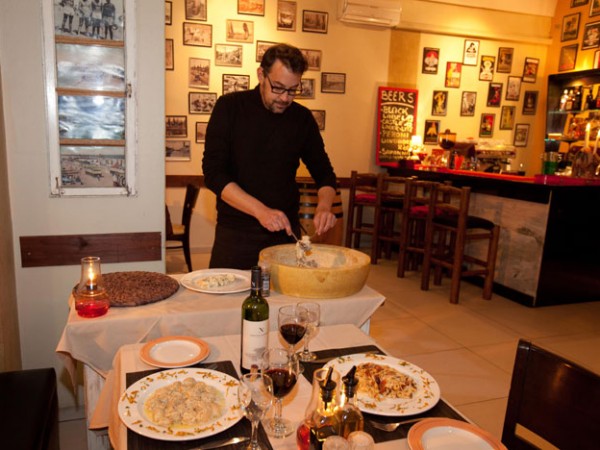 The signature wheel of parmesan at The Cousins. Photo supplied.

Each mouthful of The Cousins tagliolini dislodges the jaw, furrows the brow, and elicits a deep “mmph” of pleasure. I’m pretty sure that there are neuroreceptors in your brain that can only be activated by The Cousins mushroom tagliolini. This dish has been preordained by some sort of biochemical, evolutionary destiny.

You will want to take this pasta on a dirty weekend to Standford.

We ate off each other’s plates like siblings. We drank like druids at a celestially ordained gathering. We made merry.