The heritage list: Where to eat traditional South African food 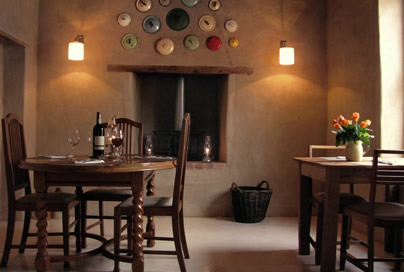 Heritage food and the revival of old recipes is big global news at the moment… and our country is simply brimming with heritage. South Africa’s diversity – and love for indigenous ingredients, of course – means that each part of the country bears evidence of its own type of traditional cuisine. While early colonisers may have left their mark, much of what we consider to be South African flavour today is a merging of this influence with local recipes and the culinary heritage of the slaves who were brought here. Durban is rich with Indian-inspired curries and spicy foods; Capetonians have a strong Malay influence in their dishes; and in the Free State flower of Bloemfontien you can find a culture steeped in Afrikaans boerekos. To give you a tasty history lesson, we’ve gathered a list of restaurants that celebrate the rainbow nation’s diverse food heritage, from boerewors and samoosas to samp and beans, waterblommetjie bredie and koeksisters.

Bismillah (Lenasia)
Gemsbok Street is not exactly beautiful and this Indian restaurant may be very plain and white-tiled, but it’s buzzy with people and news chat, and it’s very well thought-of by the locals. The aloo paratha is delicious, as is the vegetable biryani. But the place is by no means just for vegetarians: a signature dish is their sole tandoor.

Die Waenhuis
Housed in Roodepoort, Die Waenhuis Outentieke Boerekos Restaurant en Pub has Voortrekker paintings in abundance, pictures of armed men and saddles for bar chairs. Meats can be braaied at all times and on Sundays you’ll find a big buffet of potjies, ouma’s soups, malva pudding, etc. Brandy is a popular drink here and there are often live Afrikaans music acts. 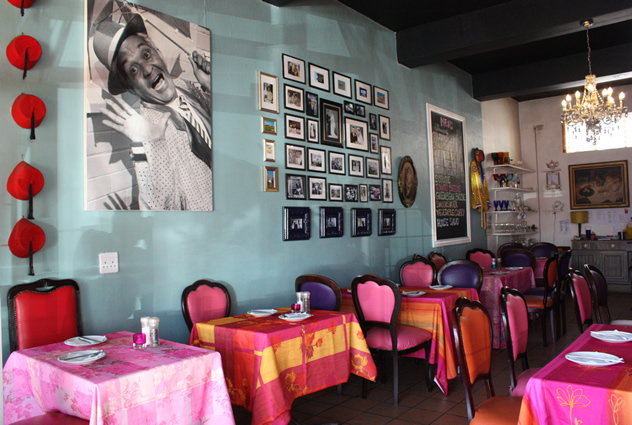 District Six
The melktert and denningvleis alone will make your trip worthwhile. This little place is really ‘klops’ fun with typical hats hung on the walls and a blackboard of specials. The vivacious Grace Fourie takes orders, snaps witty sidecracks and sees that everyone behaves. You will grin with delight. (BYO wine.)

Leshala Cuisine
This African eatery often features unusual choral acts and singers. The food is mostly a game meat extravaganza, prepared traditionally and engagingly presented. Some tourists do find their way here, but locals with taste and connections love it most. 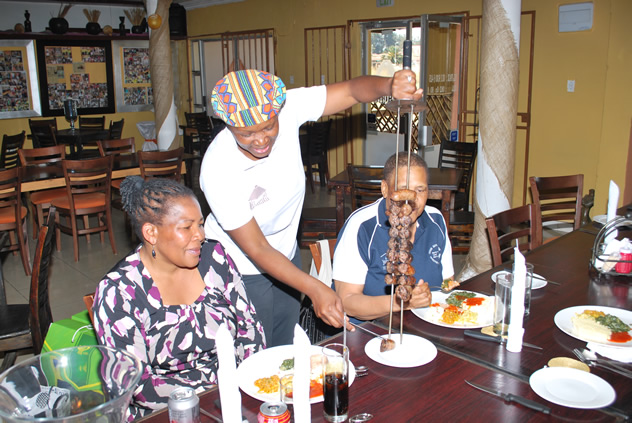 Swaruchi
A purely vegetarian restaurant in central Fordsburg, Swaruchi features some elegant tikkas and papdi chaat, so the food is wholesome, interesting and very satisfying. It may not be one of the gorgeous Indian restaurants, but the fare is faithful to its ideals and has no shortage of earnest fans.

Tribes
With a modern take on the ethnic theme, Tribes specialises in a fusion of traditional cuisine, stretching from local specialities to those of the African coastline.

Little Durban Food and Spices
This Nieuw Muckleneuk restaurant gets points for not claiming to be north or south Indian or anything other than South African Indian. The lamb curry is just what you’ve been longing for, with chutney and coconut sambals. There are good samoosas, too – try the sweetcorn version. The famous bunny chows are served in quarters or halves and there’s a huge choice of filling, including a very satisfying sugar bean curry.

Dibango (formerly Kariba Restaurant)
Rub shoulders with government ministers and editors in this tongue-in-cheekily decorated restaurant in the old Capitol Theatre just off Church Square. The menu provides a lot of variety, but the well-liked options are ting and samp, oxtail and the more African of South African dishes. Meat platters are popular among businessmen.

Bosvelder Restaurant
All the things you imagine when thinking of historic farm communities can be found here, including the rather tasty skilpadjies, potjies of every description, the no-nonsense atmosphere and no-pretences promise. You can have biltong dust over anything and there’s one platter that will introduce you not only to kaiings, but also marrowbones, pofadder and pap.

Capsicum Restaurant
Don’t be put off by the Britannia Hotel’s location, its perennially popular Capsicum Restaurant offers outstanding Durban curries which come in every version imaginable. The deboned mutton and trotter curries deserve special mention and most can be enjoyed wrapped in a roti or as an ubiquitous bunny chow.

Sea Belle
The décor is perfunctory – although you may catch a glimpse of the beach – and the service simple, but the food makes up for it. Their trademark dish for many decades has been the prawn curry, which sees generous amounts of shellfish languishing in delicious Durban-style gravy. 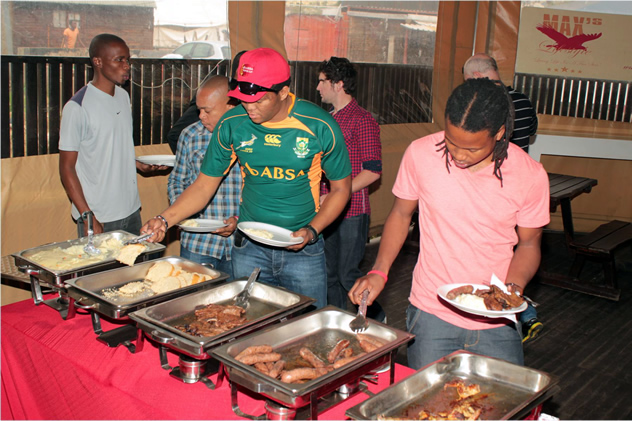 Max’s Lifestyle Tavern
Arguably Umlazi’s hottest restaurant, Max’s attracts both locals and tourists. Soak up the township vibe at lunchtime with shisa nyama – choose your meat from the butchery then pass it on to a tong master to braai. Team it with pap, chilli sauce and a beer.

Victory Lounge
It’s back to basics at this South African-style Indian restaurant. Orders are placed at the counter and speedily dispatched to the communal dining area. For six decades the kitchen has been producing one of the city’s best braised mutton curries, but there are loads of other meat and vegetable options.

Gounden’s
The entrance is literally through a panel beating shop – but first timers will be guided by the steady stream of diners wandering in. The interior is reminiscent of a working-class cafeteria, but the main attraction is the vast array of local curries efficiently dished up, mostly as bunnies.

Gold Restaurant
Experience a taste safari of cuisine ranging from Cape Malay to African cuisine. This eatery offers a full-on extravaganza with an interactive drumming session and hand-washing ceremony. 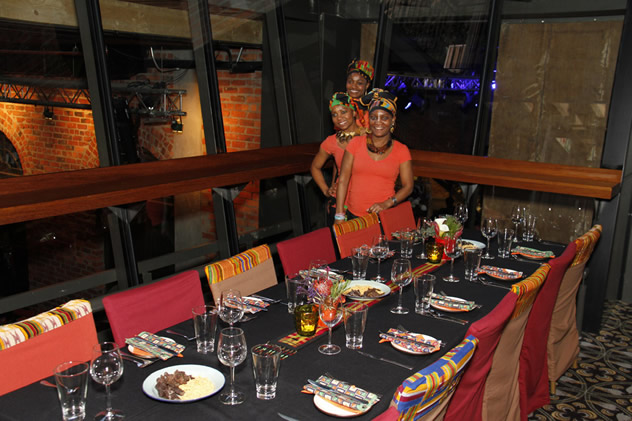 Mama Africa
The Marimba band and resident drumming group perform local beats before everyone settles down to traditional foods such as bobotie, Karoo lamb chops and wild game dishes.

Mzoli’s
The South African tradition of braaing is celebrated shisa nyama-style at this popular spot in Gugulethu. The vibe is great and the meaty fare a treat.

Babel
Situated on the Babylonstoren Estate in Klapmuts, Babel represents truly South African food heritage, creativity and architecture with some Dutch-style Delft touches. Vegetables and fruit gathered daily from the garden are served skins on in spectacular salads. 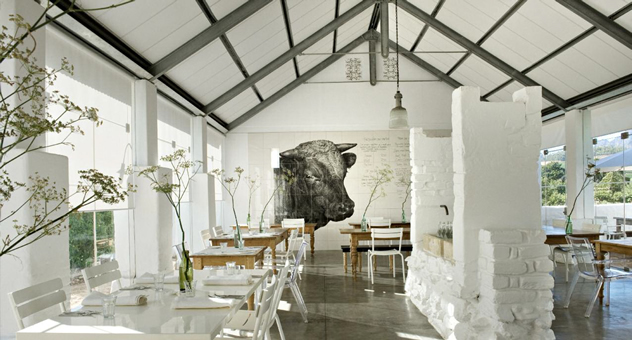 Fyndraai Restaurant
Take a day trip to Franschhoek and visit the Slave Museum next door after lunch at this restaurant. The menu features interesting indigenous ingredients with a nod to traditional Cape cuisine.

La Motte
The farm shop, museum and restaurant are all true to the cuisine of the Cape Winelands. The chef pays homage to their local roots, with the menu featuring the likes of Franschhoek trout, seasonal fruit in traditional desserts and local wines. 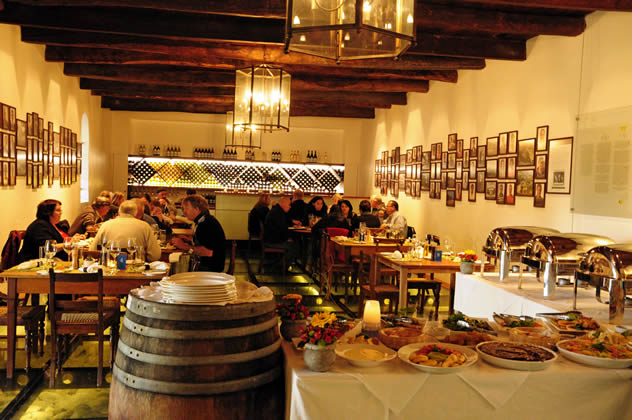 Towerbosch (winner of the 2013 Eat Out DStv Food Network Restaurant Award for Best Country-Style Restaurant)
It’s all about traditional South African food, like meat finished on an open braai and heaped old-fashioned China platters brought to the table. Melt-in-the-mouth lamb and sirloin vie for attention with roast potatoes, cinnamon butternut and french beans. Order malva or cheesecake for dessert.

Brokwa at Kumnandi
Brokwa is the Griekwa (Griqua) word for ‘bread’. The restaurant offers traditional boerekos and buffets: pot and homemade breads made in the ‘bakoond’, coffee made in a pot on the wood-burning stove and they do braais on  Sundays. Also on the menu: bobotie, sheep liver fritters, chicken or pork pie, samp and rice. They do a sheep offal evening every now and then. Stock up on the Kumnandi range of preserves, jams, koeksisters, rusks, biscuits and bread to the public.’Kumnandi’ is their own brand and is the Xhosa word for ‘lekker’.

Boesmanland Plaaskombuis
This ‘farm kitchen’ on the West Coast offers an informal outdoor experience with seafood, African food and boerekos served right on the beach.

Marmalade Cat
Hidden on Darling’s Main Road, this is one of the Swartland’s best restaurants. It’s comfort food all the way, with generous portions of homemade chicken pie, tender lamb shanks and rich stews.

Muisbosskerm
The open-air seafood buffet stretches over three hours, featuring smoked snoek, lamb bredie and potato bread with homemade hanepootkorrelkonfyt. The location on the beach is protected from the wind by a thick hedge of muisbos, hence the name.

De Kaap
Fresh greens from the garden and local ingredients are the stars on this uncomplicated menu of delicious country cooking. The chalkboard menu changes regularly. 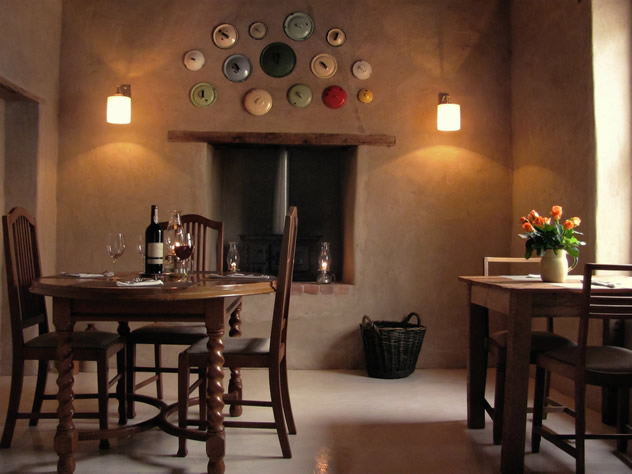 Herberg Roosje van de Kaap
The low ceiling, plastered walls and candlelit atmosphere transport you back in time, while you enjoy a menu of eclectic dishes with Cape Malay touches.

Searle’s Trading Post
At this Greyton haunt the focus is on country cooking with meals such as lamb curry with yellow rice and sambals, mielie bread and rump steak.

De Oude Meul
Housed in an historic 150 year-old building (with the eponymous old watermill still inside), the restaurant is known for the wide variety of venison dishes on the menu.

Have we missed your favourite restaurant that serves traditional South African food? Please let us know by sending a mail to info@eatout.co.za and we’ll look into it.