Perron first opened its doors in Illovo, Johannesburg, just over two years ago. Due to the success of the wildly popular tapas-style concept, the team have expanded and opened a second restaurant in Bryanston. 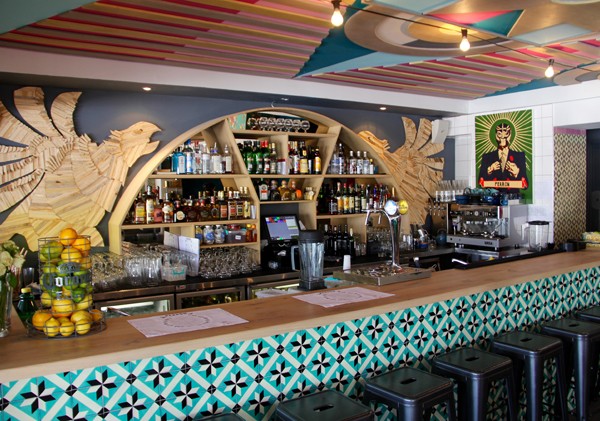 The bar at Perron in Bryanston. Photo supplied.

Owned by Thom Hughes of The Griffin and The Steamworks Gastropub, Perron in Bryanston quietly opened for business within the last few of months. Explains Thom on the decision to expand, “We did not want to franchise nor open shop after shop.” Instead, the team has simply extended Perron’s flavours to the other side of Joburg’s busy Sandton suburb.

What can fans expect at the new space? “The restaurants may look similar but are certainly very different at the same time,” says Thom. “Our approach to quality is the same, as well as the atmosphere. Bryanston is a bigger shop that’s slightly more grown-up – it caters to the area’s market, which is more suburban than Illovo.”

Guests can still look forward to the pops of vibrant colour and funky decor that the brand has become known for, as well as a similar menu to the Illovo branch. Rather than serving stock-standard nachos and Tex Mex fare, Perron introduces fresh ingredients, flavours and spices for a different take on Mexican. A tapas-style sharing section on the menu – including courgette and pea tostadas, sweet potato on sweetcorn fritters, and some really interesting quesadillas and tacos – has become their signature. As for the drinks, the original Perron will keep its cocktail focus, while the new restaurant will feature wines, with an extended wine list showcasing some popular local favourites.

Perron Bryanston can be located at Hobart Grove Shopping Centre and is open Tuesday to Sunday.