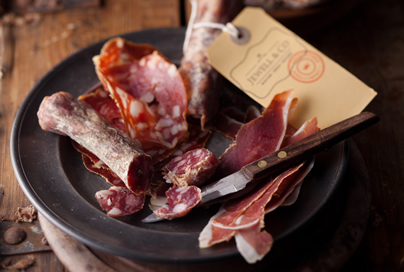 “At college I was destined to be a pastry chef,” says Neil Jewell, chef-patron of Bread & Wine and Jewell & Co., whose charcuterie won the 2013 Eat Out DStv Food Network Produce Award in the Paddock (Cured) category. But a series of twists in his fate led Neil away from the stress of London and the sweetness of sugar to find his place on a wine farm in Africa.

Fans of the Le Quartier Français restaurants will be familiar with Neil’s artisan charcuterie, in variations like home-cured bacon, saucisson sec, cardamom salami and Walter ham, which is crafted on the Môreson Farm in Franschhoek. His restaurant on the same property, Bread & Wine, which was nominated for the 2013 Eat Out DStv Food Network Restaurant Awards, serves rustic country fare crafted from the freshest seasonal ingredients, artisanal farm produce and, of course, his award-winning charcuterie.

Other chefs from around the area are known to hang out at the restaurant on their days off and use Neil’s produce in their dishes (including the 2012 Chef of the Year, Margot Janse, at The Tasting Room) – affirming his decision not to pursue a career in pastry.

Neil hails from Southend-on-Sea in Essex, England, and studied at the South East Essex College of Art and Technology. He honed his cooking skills in the kitchens of Stephen Bull, Richard Corrigan and Ray Neve before moving to South Africa and becoming head chef at Bread & Wine in 1999. Curing meat hasn’t always been at the forefront of Neil’s mind; it was through cooking that he discovered his passion. “I’m just a cook, whose hobby is charcuterie,” he claims modestly. 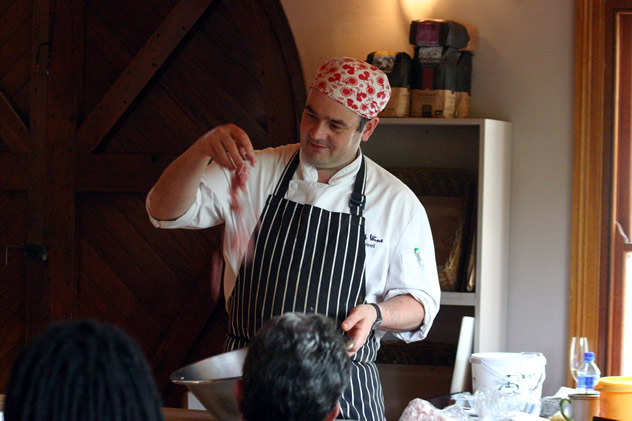 Neil loves working with all types of meat, but admits to having a knack with Charlie Crowther’s pork. These pasture-reared pigs are free to wander to all corners of the six-hectare paddocks on Glen Oakes pig farm. Neil uses the analogy of cars, saying that Charlie delivers the Rolls Royce of pork. “There are no animal foods or by-products used in his meat and there is space for the pigs to roam,” enthuses Neil. The great quality meat, together with Neil’s skill and patience, plus a bit of salt, humidity and airflow, produces this delicious charcuterie.

When asked what he does with the leftover meat scraps, Neil jokes, “What leftovers?” Following the philosophy of nose-to-tail cooking, Bread & Wine Restaurant crafts an exciting menu featuring the likes of salami, mortadella and deep-fried pork ribs with sweetcorn and chakalaka. The chef also renders the suet (extracting the fat) from his meat, to use in the kitchen and on the farm for animal feed.

When Neil gave up the fast-paced chef’s life in London to come to South Africa, we gained more than just a British man seeking the simple life. We gained a great cook and a passionate producer of award-winning shavings of lamb biltong, confit, hams, pâtés, loops of saucisson and chorizo. We hope he’s here to stay.

Watch the gorgeous one-minute profile video of Neil and Bread & Wine made for the 2013 Eat Out DStv Food Network Restaurant Awards.

Join us at the Stellenbosch Slowmarket on Saturday 12 April 2014 for the announcement of the 2014 Eat Out Zonnebloem Produce Awards.