Top trends from the kitchens of the 2012 nominees 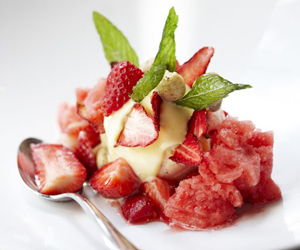 Ask the majority of the chefs at the top restaurants to tell you their signature dish, and chances are you’ll be met with blank look. Sure, there are certainly some dishes we keep coming back for, but the one thing all our nominees have in common is that they’re incapable of staying still. Like a bunch of mad scientists, our top chefs are constantly experimenting, dreaming up ever-more delicious things to delight us. Wondering what direction SA cuisine will take in the coming year? Here’s a sneak peek at the catwalk.

Chef at the aptly-named The Test Kitchen, Luke Dale-Roberts, recently opened a dedicated laboratory space across the road from his Woodstock restaurant, and thus far, it seems to be paying off. Currently, diners at the Test Kitchen begin and end their meal with identical plates – with one difference: the dainty cubes change from savoury to sweet. A little like punctuation, I offer.

“I suppose I’m getting more and more conceptual,” admits Dale-Roberts. At the moment, he’s also working on a suckling pig, involving the concept of bread, milk and honey.

Not too far away, in Constantia, La Colombe chef Scot Kirton is putting the finishing touches to an equally conceptual project: a five-course tasting menu representing the elements of wind, earth, water, fire and love.

“The wind course will be a bird, with a macadamia nut feather and edible clouds. The earth dish will be a game carpaccio with edible soils, twigs, moss and root vegetables, and the water course we will have an umami rock pool. With the fire course we are trying to make everything look burnt on the plate, so we will have blackened veal fillet, ash-baked sweet potato, turnip coal, charred aubergine and burnt thyme jus, all smoked at the table. For the love course, we are working on ‘roses are red, violets are blue’.”

Smoking, fermentation and pickling are big trends in the top restaurants around the country.

Bertus Basson of Overture admits they’ve just had a smoker built for the wine estate restaurant. “We call it ’The Big Smoke’ and we have been experimenting a lot with the smoking technique as a whole.”

Also in Stellenbosch, George Jardine of Jordan is a famous pickler. Currently, he’s even pickling flowers.

Pierneef à la Motte’s Chris Erasmus, meanwhile, says he’s trying out lacto-fermentation (that’s pickling to you and me), though something tells us he won’t be pickling the usual suspects! He’s also experimenting using herbal oils.

Eric Bulpitt of The Roundhouse is another chef foraging, pickling, curing, smoking and fermenting up a storm. “We’re making our own fish sauce with corn and sorghum. It’s a year-long fermentation process.”

There’s more to SA cuisine than bobotie and koeksisters, and our top chefs seem to be playing with some of the lesser-known local ingredients.

“We are diving into the KZN flavours more so than ever,” says Jackie Cameron of Hartford House in the Midlands. The key, says Jackie, is understanding the people and the thinking behind the traditional ingredients used in the province.

In Pretoria, Chantel Dartnall at Restaurant Mosaic says she’s exploring traditional ingredients, as well as dishes which take us back to our grandmothers’ kitchens.

“We are living in exciting times with regards to honestly produced, ethical ingredients,” says Christiaan Campbell of Delaire Graff. It’s these products, which are becoming more and more available, that are determining the menus, rather than the other way around.

Rudi Liebenberg of The Mount Nelson’s Planet says he’s also working very closely with farmers, aiming for respect towards ingredients. “We are also using a lot of things from the pasture where our lamb and chicken come from,” says Rudi.

Many of our local chefs have started gardening. The most extensive veggie patch is probably Babylonstoren, where Simone Rossouw is lucky enough to be able to have dozens of varieties of fruit and veg to work with. (We love the sound of ‘burgundy red’ and ‘salad blue’ potatoes). Simone is also harvesting her own honey, and growing her own mushrooms.

Not far away, at Makaron, Tanja Kruger is also expanding her vegetable garden. “Our new bigger Makaron kitchen garden will produce most of the fruit and vegetables for the restaurant.” She’s also just planted some perilla seeds, an ingredient she discovered while working with chef Alain Passard in France earlier this year, “The flavour is unlike anything I have tasted before and it is relatively unknown in SA.”

“Spring is a great time for fresh ingredients, which are best left simple,” says Rust en Vrede‘s John Shuttleworth. He started using lots of peas, broad beans and artichokes, which are in season in early spring, as well as rabbit, which he’s turned into a lighter version of a cassoulet.

Marthinus says he’s also playing with lots of juiced ingredients, from rhubarb to cucumber, turning them into jelly spheres and caviars.

Back in Cape Town, Laurent Deslandes of Bizerca (which is currently in the process of moving premises to Heritage Square) is working with fresh seasonal produce: white asparagus, pickled porcini and broad beans are popping up on his menu, creating lovely light lunch dishes for the new season.

Out in Stellenbosch, Michael Broughton, chef at Terroir, is spoilt with fantastic strawberries. “They are so sweet at the moment, and their colour is so vibrant.” He is busy upgrading the restaurant’s strawberry tart both visually, and “trying to get more crunch into the tart.” Sounds like a noble mission to us!

The Top 10 restaurants in South Africa, as well as a host of other winners, will be announced at the annual Eat Out Dstv Food Network Restaurant Awards on 25 November. Be among the first to congratulate the winners by attending the gala dinner. Book your ticket here.