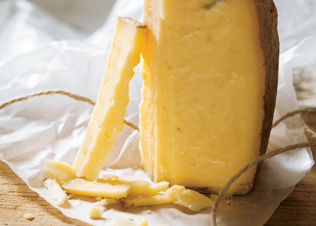 Cheese classification is a tricky subject, considering that it can be done by the kind of milk used, texture, method, length of ageing, fat content, region of origin, etc. Experts debate whether there are, in fact, over 500 different varieties, or whether the figure is closer to 1000. We don’t really mind, as long as there is cheese in the world, and lots of it.

Cheeses can be fresh (ricotta, paneer) or soft-ripened (camembert, brie); have a washed rind (epoisses, limburger) or blue mould (roquefort, gorgonzola); and be stored in brine (halloumi, feta).

Dedicated as we are to the cause of cheese consumption, we rounded up an A-Z list of cheeses from around the world. As things stand, America is the top cheese producing country (by weight), which is sad when you consider what passes for cheese in that country. (The least said about cheese in a can, the better.)

We consider it a duty to eat more of our amazing local cheeses (view the list of South African Dairy Championship winners in the cheese category here), the best of which will be announced at the Eat Out DStv Food Network Produce Awards this weekend, as well as boost cheese export volumes in France, Italy, Germany, Switzerland and elsewhere.

Do a good deed: eat some cheese.

A
Asiago is a Italian cow’s milk cheese with a texture that varies according to its age. Most commonly it appears as a crumbly aged cheese with a tangy, strong flavour.

B
Bleu en Blanc is a South African cheese created by Fairview. It has the outer shell of camembert with marbled blue-mould veins within.

Bocconcini are delightful, egg-sized mozzarella balls. Originally made only from the milk of water buffalo, they are now usually a combination of cow’s milk and buffalo milk.

Brie is a soft, cow’s milk cheese named after and produced in Brie, in the Île-de-France region. Brie is usually sold in triangular wedges (or segments) from a larger wheel. Try French toast with brie and vanilla bean compote.

C
Camembert is a French cow’s milk cheese with a soft texture, buttery colour and white rind, which is produced in rounds. Camembert, made in Normandy, was issued to French troops in WWI, keeping it firmly established in the hearts (and bellies) of the French public. Try this caramelised shallot and camembert tart or these pork and apple burgers topped with camembert.

Cheddar is one of the most popular cheeses in the world. If you don’t know what it looks or tastes like, you’ve got some serious work to do. Try these cheddar scones or a heavenly soufflé with caramelised pear.

Cheshire is a cheese produced in England and Wales. It is semi-hard and firm, with a crumbly texture that breaks down easily in the mouth, and a mild, milky taste.

Crottin was originally produced in the Loire Valley in France, but Fairview also makes a version. Made of goat’s milk, it has a white rind and a firm, nutty character.

D
Danish blue or Danablu is a blue-veined semi-soft cheese originally created to rival the roquefort. It’s usually served on an after-dinner cheese board or crumbled into dishes.

Dubliner is an Irish hard and slightly sweet cheese, which aims to combine the bite of parmesan, the sharpness of mature cheddar and the nuttiness of Swiss varieties. A noble cause, if you ask us.

Epoisses de Bourgogne is widely considered one of the more, erm, fragrant of cheeses, made from cow’s milk, with a salty and creamy taste. Apparently it was a favourite of Napoleon’s. (Maybe it’s what he kept reaching for inside his jacket.)

Edam was particularly popular for sea travel between the 14th and 18th centuries due to its longevity. Bright yellow in colour with a red wax, it is very mild, contains little fat, and has almost no aroma. It pairs well with fruit and certain off-dry wines.

F
Feta is a crumbly goat’s milk cheese made in Greece (but made with cow’s milk elsewhere). It is produced in flat blocks and stored in brine, lending it its salty taste. Try this simple feta tart, or this more decadent mushroom, butternut and feta cheesecake.

G
Gorgonzola is an Italian blue cheese made from cow’s milk. It tends to be salty and creamy with a slight crumble. Gorgonzola is traditionally added to short pasta (not spaghetti) and is popular as a pizza topping. Try mushrooms with blue cheese and sage polenta or baby beetroot, blue cheese and walnut risotto.

Gouda is a super-mild Dutch cheese made from cow’s milk, which has a mellow yellow colour. Sadly, a lot of the gouda sold in South African supermarkets tends to be luminous in colour, tasteless and rubbery. Try get your hands on the proper milky-coloured Dutch stuff.

Gruyère is hard and slightly sweet, with a nuttiness that becomes more earthy with age. It’s named after the Swiss town Gruyères. Worship at the alter of this slow-roasted tomato and gruyère tart.

Grana Padano is one of the most well-known Italian cheeses. It’s a hard cheese perfect for grating, and has a grainy texture that increases with age.

H
Halloumi is made in Cyprus with a mixture of goat, sheep and sometimes cow’s milk. An unripened brine cheese, it’s quite firm and salty and can be fried (hooray) thanks to its high melting point. Try aubergine rolls baked with halloumi and red peppers.

Havarti is a Danish cow’s milk cheese with a semi-soft texture, pale yellow colour, slightly sweetish taste, and holes dotted throughout. It is often flavoured with spices, herbs and fruit.

Huguenot is the largest head of cheese produced in SA, according to its makers, Dalewood. It’s semi-hard with nutty overtones and tastes incredible after maturation for at least 6 months – and even better after 24, we’re pleased to be able to say.

I
Imsil cheese is produced in the Korean village with the same name. A Belgian missionary came to the country in the 1950s and started a farmers’ milk co-operative, which eventually became a cheese and yoghurt factory.

Jack cheese (or Monterey Jack) is a semi-hard American cheese made from cow’s milk. Pale yellow in colour, it’s very mild and versatile. It is a favourite grated or melted on sandwiches, and is frequently flavoured with peppers, herbs and spices.

K
Korbáciky is a ‘string cheese’ from Slovakia, which is traditionally rolled on women’s thighs (yes) and knotted together into braids. It is sometimes flavoured with smoke and garlic.

Limburger is a semi-soft, washed rind cheese from Belgium. Made from cow’s milk, it has a creamy interior and orange rind (and a rather stinky aroma). It pairs well with all things Germanic (naturally), such as icy beer, rye bread and onions.

Labneh originated in the Middle East and is the middle sibling of cheese and yoghurt. It can be served fresh, or dried and rolled in spices and stored in olive oil. Sheep’s milk and cow’s milk are generally favoured, but in Saudi Arabia the milk of camels can also be used.

M
Mozzarella is an Italian fresh cheese made from either cow’s or buffalo’s milk. Mild in flavour and bouncy in texture, it becomes stretchy when melted and for this reason is popular as a pizza topping. Try this recipe for pan pizza.

Mascarpone is a decadent Italian cheese made from cow’s cream, which has a soft and creamy consistency. It is prevalent in desserts, especially when served with nuts and figs. Try these delicate macaroon tartlets with fresh raspberries.

N
Neufchâtel, made in Normandy, has a white rind and a taste said to resemble mushrooms. Produced in heart shapes, this cheese is believed to date back to the 6th C.

O
This is, no doubt, the shape of your mouth while reading this list.

P
Paneer, which is very popular in Indian dishes, has been compared to less salty cottage cheese. Made from cow’s milk curds, it has a mild taste and soft texture.

Parmesan or Parmigiano-Reggiano is one of the most well known Italian cheeses. Hard and golden in colour, it is made from cow’s milk and is aged for an average of two years. Grate it into pasta dishes and risottos and shave it into salads. Never buy the smelly pre-grated variety in packets! Try this asparagus and pea risotto, brocolli soup with parmesan toasts, or brinjal and tomato parmesan bake.

Provolone is an Italian semi-hard cheese made with cow’s milk. It can vary in flavour, from sweet to sharp.

Pecorino is made from sheep’s milk in Italy to produce a hard cheese with a crumbly texture and buttery flavour. This cheese is more affordable the Parmigiano-Reggiano and is used in pasta dishes and salads, as well as on a cheese board.

Q
Queso blanco is a soft and creamy fresh (unaged) cow’s milk cheese similar to paneer and feta made in Spain, Portugal and in South American countries including Mexico.

R
Raclette is a Swiss cow’s milk cheese loved for its meltability. (This should be a word.) It’s a social cheese, which is melted in the centre of a table on a special grill or in front of a fire. The diners then scrape off the melted cheese and enjoy it with cold meats, pickles and potatoes.

Roquefort is a French, soft, sheep’s milk cheese with a blue/green mould and no rind. It’s creamy, tangy and complex, and pairs especially well with figs, fruit and nuts.

Ricotta is an Italian whey cheese with a creamy and soft consistency and mild flavour. It can be produced from sheep, cow, goat or buffalo milk whey. Make this sweet fig and ricotta tart or rye crostini with roasted peppers, broad beans and ricotta.

S
Stilton is an historic English cheese with a blue vein (blue stilton) or without (white stilton), both of which have DOP status. While some consider the blue version to be unpleasantly stinky, true cheese lovers enjoy it simply on a cheese board with crackers and pears, in sauces and salads, and paired with a sweet wine.

T
Taleggio is a washed rind and smear-ripened Italian cheese with a pungent aroma and comparatively mild flavour. It melts well. Try this potato, taleggio and spinach tart.

U
Urda is a fresh white cheese from Romania (similar to ricotta) that is popular throughout eastern European countries. It is used especially in desserts.

V
Velveeta is an American-style cheese with (we think) an alarmingly yellow hue and soft, ‘velvety’ texture.

W
Wensleydale is a cow’s milk cheese named after the town in which it has been produced for centuries, Wensleydale in Noth Yorkshire in England. In its traditional form, the cheese is crumbly but creamy, but recently fruit such as cranberries and apricots have been added to it.

X
Xynomizithra is a Greek sheep and/or goat whey cheese produced on the island of Crete. The cheese is soft, white and creamy, with a sour taste. It is commonly served with honey as a dessert. Xynomyzithra Kritis is a European protected designation of origin (DOP).

Y
Yaroslavsky is a Russian (who’d have guessed from the name?) hard cheese made from cow’s milk, with a slightly sour taste. It is usually produced in rounds.

Zufi is an Italian cow’s milk cheese similar to ricotta made in Piedmont.

Salivating for some tangy, creamy, cheesy goodness? Consult our list of where to find the best cheese boards across the country.