The ultimate guide to South Africa’s most iconic foods

Don’t listen to these guys at Buzzfeed; they’re doing it wrong. To truly enjoy South African food, you have to actually be in South Africa. It’s all about shared history, your surroundings, and the people with whom you’ve gathered to break (braai) bread. So, here it is: the guide to essential foods that all visitors – and residents – should taste when on our gorgeous shores.

It’s a ball of dough; it’s fried; it’s filled. Vetkoek really lives up to its name, meaning ‘fat cake’. Favourite fillings include spiced mince, apricot jam and grated cheese, or polony. Watch how to make it – and learn some new Zulu and Setswana food words while you’re at it.

You can buy these strips of umami-rich dried and spiced meat – usually beef, kudu or ostrich – at almost any supermarket or corner café – but our particular favourite comes from Cape Town-based butchery, Frankie Fenner. Biltong is best enjoyed with a beer while watching sport, but if you’re in the Winelands and want a more elegant introduction, try the halloumi steak topped with green olive relish, Cape Gooseberries and crisp shaved biltong at Babel.

A post shared by Frankie Fenner Meat Merchants (@frankiefennermeatmerchants) on Jul 30, 2018 at 8:58am PDT

This traditional Cape Malay dish comprises gently spiced minced lamb or beef topped with an egg-and-milk layer and browned in the oven. Some recipes call for the addition of apple, raisins or apricot jam and the sweetness works well with the curry powder and turmeric that lend the dish its golden colour. Try an updated version of the classic dish at Skotnes Restaurant. 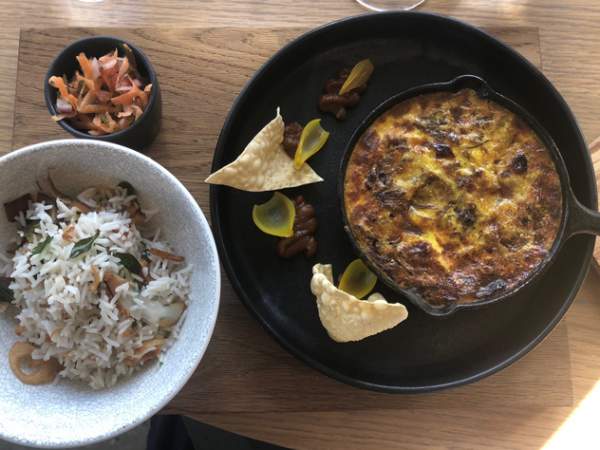 The memorable bobotie at Skotnes. Photo by Zola Nene.

This traditional thick farmer’s sausage is a staple at braais and hangover breakfasts. (It’s great on a soft hotdog roll with fried onions and lashings of sauce, too.) Spiced predominantly with coriander and containing a mix of beef and pork, the sausage comes in a big coil, which sizzles pleasantly when you turn it over with tongs on the braai. If you’re in Gauteng, head to +27 Cafe for a number of boerie offerings. They include it in most of their breakfasts and have even been known to pop it into a quiche.

These grilled sandwiches are ever-present at many home braais. You can put anything between two slices of bread, pop it on the grill, and call it a braaibroodjie, but they usually contain some combo of cheese, onion and tomato. If you’re feeding a large group, you can make a braai pie with sheets of dough instead of bread. If you’re out and about in Pretoria, order the fancy brie braaibroodjies oozing with caramelised onions at Afro-boer in Pretoria.

This is the quintessential South African way of eating, where friends gather sociably around an open fire and cooking is done over the coals. Trends analyst and lifestyle writer Sandiso Ngubane agrees: “Give me a nice juicy boerewors and tender lamb chops straight off the braai, pap and some chilli chakalaka and you have my heart!” For food writer Kate Liquorish, creator of the Kitchen Hacks video series, the most iconic South African dishes all relate back to the incredible meat we have in South Africa. “But, more important for me than the dishes themselves is the pairing of these dishes with authentic experiences in authentic surroundings: boerewors rolls at the rugby or around a braai… and real shisa nyama outside a crowded shebeen or in the heart of Soweto. That, for me, is where the real flavour lies.” If you can’t wangle an invitation to the house of a local, make a trip for shisa nyama to Chaf-Pozi in Soweto. 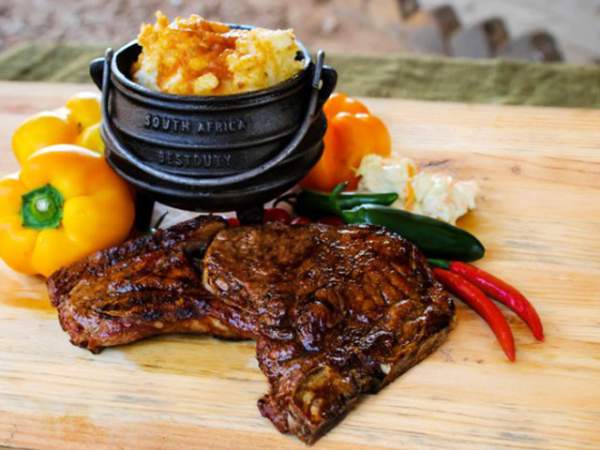 Commonly made with lamb and waterblommetjies (an edible flower found in our dams and marshes) or beef and tomato, bredie is a slow-cooked comforting stew. For chef and blogger Jody Theodore, cabbage bredie was a favourite of his childhood. “Thinking back, I’m hit by flashbacks of the smell of the braising technique my mom used to get a good dark caramel colour to the cabbage, and the sizzling sound of the meat being sealed. Once the sizzling becomes a gentle simmer and the chemistry happens, you’re spoilt with this beautiful aroma.” He recommends serving it with white rice and some pickled beetroot – the combination of champions.

Originally conceived as a travelling lunch in KwaZulu-Natal, a bunny chow is a hollowed out loaf of white ‘government’ bread filled with curry. Durban is the place to try it. Capsicum does a legendary bunny, as does Cane Cutters, but you can bank on getting a decent one at any tiny hole-in-the-wall streetside café. 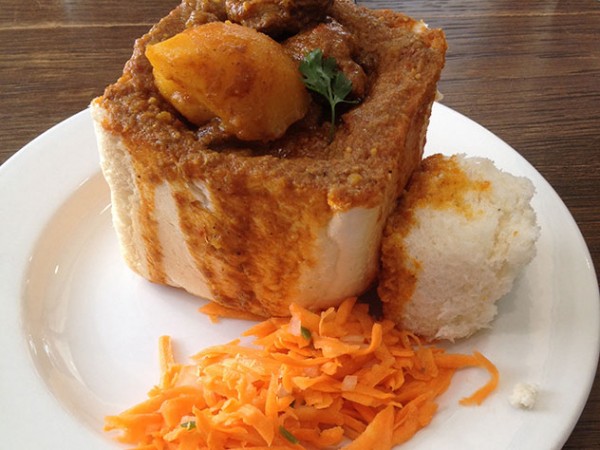 This traditional Cape Malay dish, reportedly one of the oldest South African recipes, is a sweet-and-sour slow-cooked stew flavoured with spices and tamarind. It’s on the menu, amongst many other traditional items, at Bo-Kaap Kombuis in Cape Town.

We’ve traced the origins of this after-dinner boozy milkshake to the 1970s, but most places will be able to make you one if you ask. Sip on the signature don pedro at Dale’s Black Angus in Milnerton or, if you’re up-country, at The Dullstroom Inn in the fly-fishing capital of Dullstroom.

This giant filled roll is another street-food masterpiece. Local food writer Bernadette Le Roux says, “When it comes to iconic SA food, the gatsby immediately springs to mind. This legendary stacked foot-long sandwich is meant for sharing and is filled to bursting with slap chips (chunky, soft fries usually doused in vinegar), masala steak, egg, Russian sausage and sometimes polony or a vienna accompanied by atchar or peri peri. It originated in the Cape Flats in the 1970s as an economical meal. Not the kind of food you’re likely to eat on a daily basis, but you haven’t been to the Mother City if you’ve never tried a gatsby!” Try a legendary gatsby – sauce running down your arms and hot chips falling in your lap – at Mariam’s Kitchen in Cape Town. You can even try a vegan version at Lekker Vegan.

These deep-fried dough treats either take the form of a crunchy braided dessert soaked in syrup (koeksisters, of Afrikaans heritage) or a pillowy spiced snack rolled in coconut (koesisters, of Cape Malay heritage). Both are irresistibly delicious.

This classic is often compared to the bunny chow – understandably so, since it also comprises bread hollowed out and filled again. However, its contents are what distinguishes the kota (named after it being made with a quarter loaf of bread) from its Durban cousin: the soft loaf is crammed with a combination of, among other ingredients, atchar, polony, slap chips, cheese, eggs and Russian sausage. When you’re in Gauteng, the best kota can always be found at the spaza shop nearest to you, but if you want somewhere to start, check out the ones at African Hot Plate and Kota Joe.

Many South Africans will tell you that their granny makes this simple baked pudding with toffee sauce best, but you can also order an exemplary version at 33 High Street in Modderfontein, Johannesburg.

Pale, smooth and topped with a sprinkle of cinnamon, milk tart is a soothing tea-time treat. Family recipes go back hundreds of years, but you’ll be in safe hands ordering it at The Whippet in Johannesburg. You also won’t regret trying the milk tart pancakes at Betty Blue Bistro in Hermanus.

Enjoyed everywhere across the globe from France to China, stewed tripe is also a beloved comfort food on the southern tip of Africa. Chef, blogger and entrepreneur Lesego Semenya says mogodu with ting is the one iconic dish that he’ll always look back on and cherish. “Mogodu is tripe, slow cooked for hours until soft; ting is a stiff porridge made from fermented mabele/sorghum. Mabele is also very versatile and can be played around with like quinoa and arborio rice.” Order traditional tripe at Melville Grill Lounge Johannesburg.

Made from coarse ground maize cooked with water, pap is a staple for many South Africans. You can have it quite fluid as a porridge, or more dry, balled up and dipped in sous (a chunky tomato-and-onion sauce), with chakalaka (a spicy chunky fruity salsa) or with your meaty stew. You can try pap with flame-grilled brisket and chakalaka at The Bannister Hotel Bar and Restaurant in Braamfontein, or as a side with your meaty main at The Grillhouse in Sandton and Rosebank, plus at the The Local Grill in Parktown North. In a more modern take, Afro-boer in The Willows serves pap in wedges with fried eggs and boerewors.

Not the most stylish dessert, but still one of the most popular in South Africa. This no-cook pudding sports layers of biscuits, whipped cream, caramel treat and Peppermint Crisp chocolate bars. Try the Peppermint Crisp sundae at Thunder Gun Steakhouse in Northcliff.

Named for the small three-legged pot it cooks in, potjiekos refers to a stew of sorts made up of meat and a mix of hardy vegetables. Traditionally, a potjie is cooked slowly in the heart of a fire, so the best cuts of meat for this include lamb neck or shank and ox tail. (Though we’re partial to a veggie potjie every once in a while!) It can be served with nearly any side, but the best vehicles for mopping up all those juices are plain white rice and a slice of bread with a thick layer of butter. If you’re not up to making one with a bunch of friends in true local style, have one served to you at a Moyo. They do a venison one plus a three-bean one featuring sugar beans, black-eyed beans and red kidney beans.

This street food is a boiled sheep’s head, named for its widely grimacing mouth, and is popular for its tasty tenderness. It’s a fairly traditional Xhosa dish, where the head can either be served whole in all its toothy glory, or the meat can be shredded from the bone to form part of a soup or stew.

A tasty species of mackerel that populates the seas around South Africa, snoek can be tricky to eat due to all its fine bones, but the flavour is the reward. Your first choice for snoek should be in rustic battered fish and chips at Kalky’s in Kalk Bay (an institution). Equally as good is a parcel from Lusitania in the City Bowl. 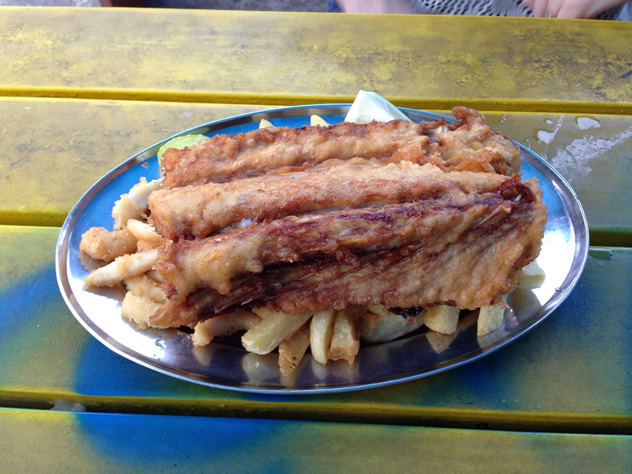 Battered fish and chips at Kalky’s. Photo courtesy of the restaurant.

This simple starchy dish pairs samp (unhusked maize) with beans to make a filling and nutritious side dish. It’s said to have been one Nelson Mandela’s favourite foods and goes great with any slow-cooked stews.

Zodwa Kumalo-Valentine, writer and digital director of Livity Africa, says this dish of pap with fermented milk is one her favourite foods from childhood. “I’ve always enjoyed the complementary combination of the crumbled salty pap and creamy-sour milkiness of amasi. My mother made (and still) makes it best. I’ve never tried to make it myself for fear of corrupting the memory of that sweet summer dish of my youth.”

Want to delve deeper into South African food? Read our article on SA’s 25 most nostalgic foods plus our feature on the most iconic South African desserts.

Ready to make a booking to try one of these local greats? Use our app to find restaurants, book tables and review your meal. Download our free app now.

Did we miss anything? Let us know in the comments section below.